Michigan signee Jordan Anthony has a rare, ambitious goal for his college career

BRADENTON, Fla. — Jordan Anthony sat at a table with three of his female IMG Academy classmates.

It was February 1, but there was no signing day drama for him. Anthony was decked out in Michigan gear and ready to sign his National Letter of Intent two months after he made the announcement that he was going to Ann Arbor in 2017. He was one of 21 IMG Academy football players who earned a college scholarship, yet he sat at the table as the odd man out.

Anthony wasn’t an early enrollee. All of his IMG teammates were already a month into their respective college careers. But Anthony wasn’t held back because of academics or eligibility issues.

He was just a kid who wanted to keep playing baseball.

“Of course (signing day) was kinda lonely because you’re not there with your boys,” Anthony told Saturday Tradition. “But I’m definitely happy that I stayed and got to play baseball.”

That was Anthony’s unconventional plan at the highly-specialized IMG — he was the lone two-sport athlete on the football team — and it’ll be his plan at Michigan. The four-star linebacker’s first priority will be football, but Anthony will also try to walk on and become an outfielder for the Michigan baseball team.

The obvious question had to be asked. How does Jim Harbaugh feel about that?

“Since (Harbaugh) used to play baseball, he’s definitely open to that kind of stuff,” Anthony said. “He said it’s ok. As long as I’m doing what I have to do on the football side, that’s all that matters.” 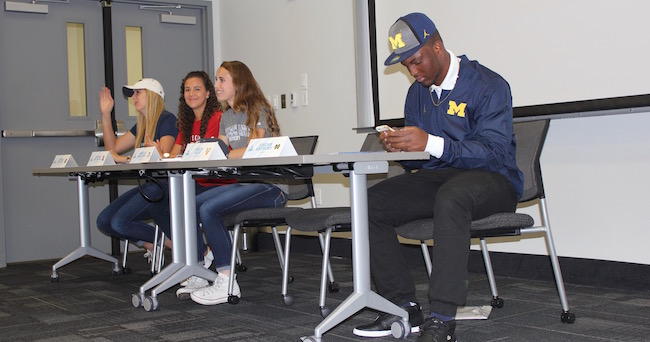 Anthony has plenty of experience juggling both schedules. The Silver Spring, Md. native spent his final two years of high school in Bradenton, where he took on the rare challenge of playing two sports at IMG.

He had plenty of days when he’d practice with the baseball team and then leave to go lift with the football team. On top of that, Anthony handled his business in the classroom and kept his GPA above 3.0.

The spring was when Anthony’s schedule got especially hectic. When Michigan came down to IMG for its well-documented spring break practices in 2016, Anthony couldn’t talk with any of the coaches — it was a recruiting dead period — but he did get to see the Wolverines’ final day of practice that was open to the public.

Well, he watched until he had to leave early for a baseball game.

Still, he saw enough that day for it to make a lasting impression on him.

“Just seeing the way they worked with the players in practice and stuff like that, that definitely helped a lot,” Anthony said.

Part of Michigan’s appeal was getting to play in Don Brown’s defense, which finished first in FBS in yards allowed in 2016 and just had seven players drafted. The blitz-happy, high-energy identity of Brown’s defense stood out to Anthony.

As for coming up with a one-word description for his new defensive coordinator, that proved to be a bit of a challenge.

“Oh…one word?” Anthony asked. “Fired up. I know that’s two but every time I talk to him, he’s just fired up and passionate about everything. I definitely love Coach Brown.”

After Anthony signed with Michigan, Brown referenced his “tremendous position flexibility” as one of the things that made him a blue-chip recruit. Fittingly, Anthony was versatile on the football field, too.

Before he got to IMG, he received scholarship offers to play running back. He was a bruising tailback as an underclassman in Maryland before making the switch to play linebacker exclusively as a senior. As it turned out, his skills at linebacker were even more impressive to college coaches.

The same range that helped him track down balls in center field allowed him to becoming a sideline-to-sideline tackling machine at IMG. With his speed at 6-0, 220 pounds, Anthony won’t be lacking any of the physical tools needed to play two sports in college.

Anthony’s next two months will be a bit atypical, even for him. He just finished up his baseball season, which means that there are no more games or practices at IMG. Instead, his time will be spent on schoolwork and training. Unlike most high school seniors, he’ll get the benefit of working out at IMG’s world-class facilities.

That, he hopes, will allow him to keep pace with Michigan’s other early enrollees. After all, Anthony’s goal is to start as a true freshman.

He has big-time aspirations in the classroom, too. Anthony wants to study business and finance at Michigan.

The do-it-all path has been done before in the B1G. In the late 1970’s, quarterback Rick Leach earned All-American honors in both baseball and football. Currently, Jawuan Harris is successfully playing — more like starring — on both the football field and the baseball diamond at Rutgers.

Anthony has a long way to go to follow in those kind of footsteps. For now, he’s focused on just proving that he’s worthy of playing football and baseball at Michigan.

If Anthony has things his way, professional scouts will force him to narrow it down to one sport in a few years.

“Honestly, if I got drafted for either one, I would definitely take either one,” he said. “Whichever one takes me further, that’s what I’m gonna go with. That’s what I always say.”