Where team was when he was hired — Not very Michigan-like.

A five-win season was filled with frustration and national embarrassment. If not for a couple of putrid seasons under Rich Rodriguez, it would’ve been the worst season in Ann Arbor since the Bump Elliott era.

Michigan was the program that was still holding on to yesteryear. Two seasons above .500 in the B1G in the last seven years was not the sign of a powerhouse program. The “winningest program in the history of college football” claim wasn’t holding up too well with the fact that Michigan hadn’t even won a conference title in a decade.

Despite that, Brady Hoke landed the No. 4 recruiting class in 2013 and the No. 6 class in 2012. He got by on preaching tradition, but he didn’t know how to maximize talent. Michigan’s next coach had to be more than a recruiter. He had to be someone with a proven track record who knew how to handle the spotlight and expectations.

Harbaugh was the dream hire, so much so that few non-Michigan fans believed he would come back to his alma mater. Bringing in a Michigan man who was two years removed from a Super Bowl seemed too good to be true.

When it actually happened, there was a different kind of buzz surrounding the program. Immediately, he provided the shot in the arm that Michigan needed in the post-Lloyd Carr era.

Harbaugh’s assault on the SEC began with a drubbing of Florida in the Citrus Bowl. For whatever reason, some didn’t view blowout victories against BYU and Northwestern as quality wins. The Florida game was his chance to show that his team could beat up on future NFL players, too.

Some in SEC country don’t like to give the Wolverines credit for dismantling a Florida team that overachieved in 2015. Maybe the disarray of Florida’s offense took away from Michigan’s defensive dominance. Whatever the case, it was Harbaugh’s most impressive showing to date at Michigan.

It was only the second time in eight years that the Wolverines ended the season on a positive note. Picking up a New Year’s Six win against the SEC — in what was basically a road game — was a solid bounce-back after the disaster that was the Ohio State game.

Would Harbaugh have had the offseason he had without that Florida game? That, we don’t know. There might be a few more national skeptics if Michigan had dropped two straight to end the season and finished with nine wins instead of 10. Instead, Michigan is back into the national title conversation heading into 2016. That’s a little different than 10 months ago.

There hadn’t been a more meaningful game in the Big House in a long time than when the Buckeyes came to town. Michigan still had a backdoor chance to get to the B1G Championship and possibly, the College Football Playoff. Even better, the Buckeyes were vulnerable after collapsing against Michigan State a week earlier.

Well, apparently that just woke them up.

Ohio State came to Ann Arbor and took the air out of the building, to say the least. It was Michigan’s worst loss to Ohio State at the Big House since 1961. Harbaugh wasn’t even born yet.

It was a dose of reality. Was Ohio State 29 points better than Michigan in 2015? Maybe not, but the Buckeyes had far greater upside. There’s a reason that Ohio State had 10 players drafted before Michigan’s first player came off the board.

That’s the level of talent Harbaugh wants to get on a yearly basis at Michigan. He didn’t have that last year.

In the long run, he’ll get a pass because that was basically Hoke’s team that Harbaugh still won 10 games with. He got a pass for the Utah game because that was the season opener on the road and the Utes turned out to be a pretty solid team. Harbaugh was a freak play away from finally getting Michigan a win against Michigan State, so that loss wasn’t necessarily embarrassing for Harbaugh.

Getting beat by Ohio State by 29 points at home — no matter how talented the Buckeyes were — is a tough pill to swallow. 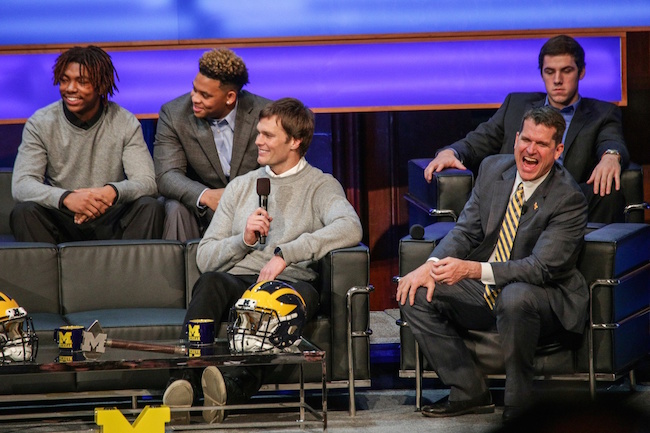 Harbaugh probably garnered more headlines than the rest of the country during the 2016 recruiting season. He slept at recruits’ houses, he climbed trees and he mimicked promposals. Oh, and he made the biggest signing day spectacle in the history of signing day spectacles.

But more important than that, he signed some serious talent. A whopping 28 signees were made up of 14 four-star recruits, and one mammoth five-star recruit. Lost in the shuffle of Michigan’s New Jersey dominance was the fact that Harbaugh landed four-star California recruits David Long, Devin Asiasi and Dylan Crawford.

So while Harbaugh signed arguably the most-hyped recruit in B1G history, Michigan is familiar with top-five classes. That won’t be what defines his legacy in Ann Arbor. Top-five finishes are obviously more important than that. If his first 12 months were any indication, that’ll be the annual expectation.

What could get him fired — Go 0-12, have a Rutgers-like string of arrests/scandals and a complete Harbaugh media meltdown. In other words, his job is safe beyond 2016. Even Johnny Manziel took a full two years to fall from grace. Harbaugh isn’t doing that in one year or probably ever. 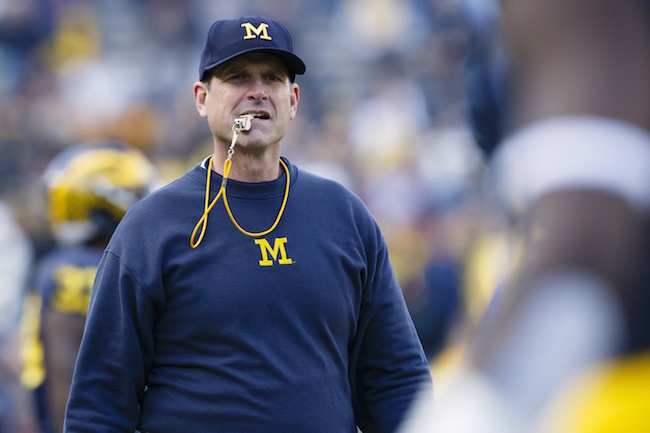 Why he’s at No. 3 — So there’s two schools of thought on this. Iowa fans called me out for putting Harbaugh ahead of Kirk Ferentz, which I already answered. But I’ll do it again.

Harbaugh’s résumé is deeper than one season at Michigan. His Stanford days count — he took a one-win team and turned them into a BCS-bowl winner in four years — and you can even go back to his San Diego days. Harbaugh flipped two programs within four years, and that’s just his college résumé. If you want to ignore the fact that Ferentz was at home after a four-win season while Harbaugh was preparing to coach in the Super Bowl, that’s your prerogative.

Ferentz was the national coach of the year by some publications in 2016. No one can take that away from him. But Harbaugh gets the edge because he’s won at everywhere he’s been. He hasn’t had the peaks and valleys of a coach like Ferentz, who has been at one school for his last 17 years. If I’m picking a coach to recruit in any situation and coach a game against any team, I’m taking Harbaugh over Ferentz.

Ok, so now there’s the other question some might have. Why isn’t Harbaugh ahead of Mark Dantonio?

After all, Harbaugh has the better recruiting classes and he’s coached at a higher level.

Well, Dantonio has the one-game head-to-head advantage so far (fluke play or not). Dantonio took over a four-win team at MSU, but one with far less history than Michigan. Given Michigan’s resources, anyone — even Spartan fans — would say that it’s easier to recruit and rise to prominence at Michigan than at Michigan State. Dantonio gets the nod there.

And in a career head-to-head comparison (FBS head coaching only), Dantonio also gets the slight nod:

That’s for anybody who wants to claim that Dantonio’s résumé is better just because he has 12 years of FBS coaching experience under his belt while Harbaugh only has five.

Nationally, Harbaugh is obviously the more polarizing figure. Some might already be willing to put him ahead of Dantonio. He could be on his way to that. But for me, he has to win a conference title or two. He also has to pick up a few more wins against top-10 teams. And for starters, he has to beat MSU.

Harbaugh has done a ton in a short period of time to become a top-three coach in the B1G and a top-10 coach in the country. All signs point to him rising on this list and moving ahead of some SEC coaches nationally.

The latter would certainly bring a smile to his face.