Cade McNamara posted an Instagram Story of himself undergoing surgery.

McNamara posted the picture of himself in a hospital bed and captioned the story, “Here we go!” He confirmed that he was going through surgery. It is unclear how long McNamara will be out as a result of the surgery.

His injury status could impact Michigan’s quarterback depth. McNamara has been Michigan’s backup quarterback for most of the season after he lost the starting job to JJ McCarthy. This surgery could derail the last month of his season and eliminates McNamara as a backup option to McCarthy. 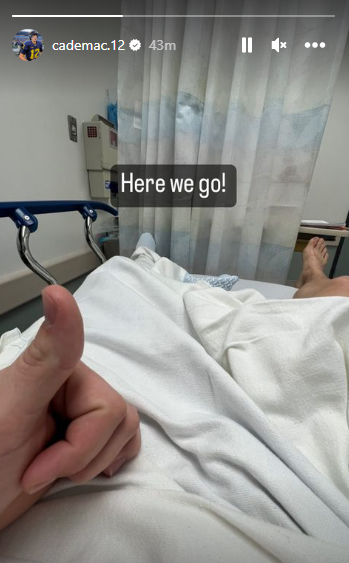 McNamara was Michigan’s primary starter in 2021 and he led the team to it’s 1st College Football Playoff appearance in program history. He went through a quarterback battle with McCarthy throughout the offseason and Michigan’s starting quarterback was not decided until Week 3.

In Week 3 against UConn, McNamara was injured and he was forced to undergo surgery nearly 2 months later. At the time, Michigan was hopeful that McNamara could return before the end of the season, but that will be unlikely. McNamara last played against UConn on Sept. 17.

Since McNamara missed out on the starting quarterback job, this injury could force him to make a decision on his return to Michigan in 2023.