Dalvin Cook will be toughest test yet for Michigan defense

All three are household names. All three had their fair share of highlight-reel plays. If they all return next year, they could become consensus All-Americans. That’s the list of top-shelf playmakers that Michigan has been asked to shut down this year.

With all due respect to Barkley, Barrett and Samuel, Cook will be the Michigan defense’s toughest defensive task all year. If the Wolverines wish to recover from the devastating Ohio State loss, that process starts and ends with containing Cook. 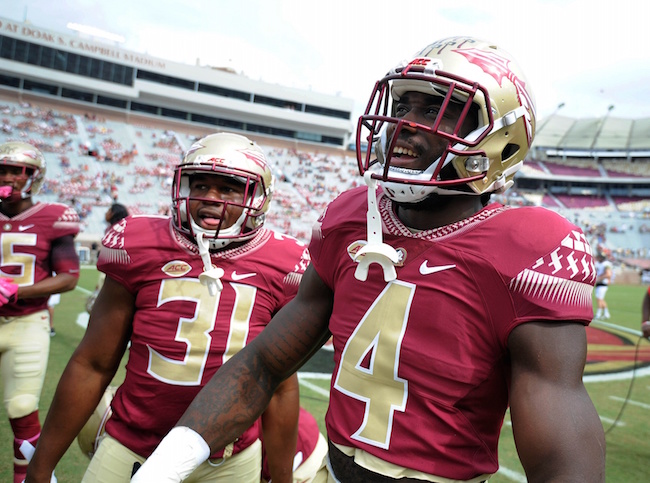 Christian McCaffrey and Leonard Fournette were considered the overwhelming preseason Heisman favorites, but Cook was right there with them. And despite a slow start to 2016, he was better than both of them and significantly better than nearly every other running back in the country.

It’s probably unfair to pinpoint one rough stretch for Cook because he’s been about as consistent as they come. He finished sixth in the country in rushing each of the last two years.

Among Power Five backs, Cook has been about as good as there is over the last two years:

You could easily argue from a statistical standpoint that Cook has been the best back in college football over the last two years. The fact that he never got a Heisman Trophy invite is a crime in itself.

Cook’s game is more than numbers. At 5-11, 213 pounds, he’s the ideal college back. He has breakaway speed, he can run you over and he can catch passes out of the backfield.

Look at the plays he made against a Clemson defense loaded with NFL talent:

Without seeing his skills as a pass-blocker, there’s definitely some Ezekiel Elliott there. If that’s not enough to get Michigan’s attention, nothing is.

Surely the Wolverines have Cook at the top of the scouting report. Don Brown has probably been watching film on him since with minute he found out Michigan’s bowl destination.

The question is whether or not Michigan will hold up against FSU’s rushing attack if it isn’t getting tackles for loss. Those occurrences have been few and far between, but there have been times when Michigan’s 13th-ranked run defense looked vulnerable.

The Wolverines were gashed by Michigan State running back L.J. Scott, who racked up 186 yards from scrimmage despite the fact that the Spartans trailed for most of the game. Iowa’s Akrum Wadley was dominant down the stretch in the upset win against Michigan, as was the Ohio State ground game.

Cook is obviously more capable than any of those backs of lighting up the Wolverines. He’d also love nothing more than to add some quality film against a bunch of Michigan’s future NFL draft picks.

That’ll be an interesting element to keep track of. Michigan defensive linemen like Taco Charlton, Chris Wormley, Ryan Glasgow and Maurice Hurst could also be playing in essentially a showcase game to boost their draft stocks. There could easily be seven Michigan defenders that wind up getting drafted.

If you think non-College Football Playoff bowl games are meaningless, remember that. 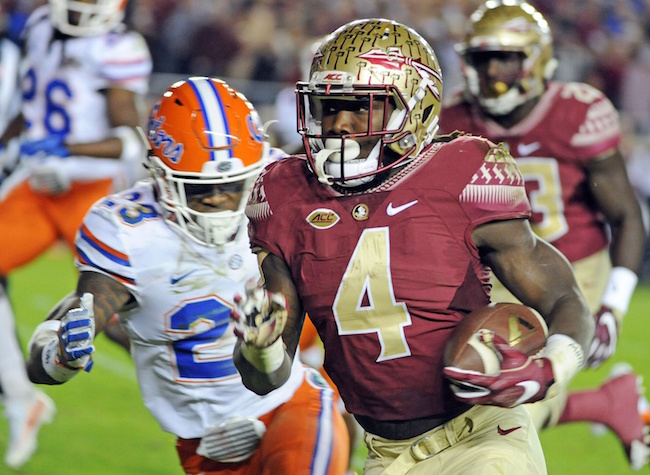 There’s no way that this should be a game in which Michigan’s front seven looks disinterested. Cook and the FSU offense are far too explosive not to take advantage of a team already finished with the season. This is the same guy that averaged 189 yards from scrimmage in his final nine games.

It’ll be interesting to see if FSU runs Cook right at Jabrill Peppers. That, according to some, is Peppers’ biggest weakness. Is this a game in which Peppers can prove his doubters wrong by blowing up Cook in the backfield? Or will it be a reason to give NFL general managers pause about drafting him high in the first round?

We don’t know. We do know that Cook rushed for at least 130 yards in more than half the games he played in since the start of 2015. We also know that the Wolverines haven’t seen a tailback that consistently dominant since Jim Harbaugh took over.

With a month to prepare, it’d be surprising to see anything less then a concerted effort to shut down one of college football’s most talented players. The last two times Harbaugh was given a month to prepare for a game — both were after downer ends to the season — his teams won by a combined score of 81-19.

Whatever special sauce Harbaugh used to dominate in those games, he’d be wise to apply it to Cook in Miami.