Two years in at Michigan, how similar was Jim Harbaugh's start to Brady Hoke's?

I’m talking to you, Michigan fan that’s ready to blast this article before you even read it. It’s easy to get defensive when you see Jim Harbaugh and Brady Hoke in the same headline. I get it. The end of the Hoke era compared to the start of the Harbaugh era was night and day.

If you’ll recall, the “Michigan is back” conversation was alive and well in the first couple years of their respective tenures. It didn’t take a conference title for the hype train the leave the station, either. It took major Year 1 improvements for the Wolverines to get back into the national conversation.

The goal at Michigan, however, is never just to be part of the conversation. To Harbaugh’s credit, he got a whole lot of people talking about the Wolverines again. He’s at the beginning of what Michigan fans hope is an era full of B1G Championships, College Football Playoff berths, and at least one national title.

There’s certainly more reason to believe that the Harbaugh era won’t take the turn that the Hoke era did. That is, finish 12-13 and post a 6-10 conference mark in the next two seasons. Harbaugh’s pre-Michigan accomplishments — leading a team to a Super Bowl and making three straight NFC title games — have a lot to do with that.

Though if one were to look at the body of work through two years, one would see a lot more similarities between Harbaugh and Hoke than it might appear. 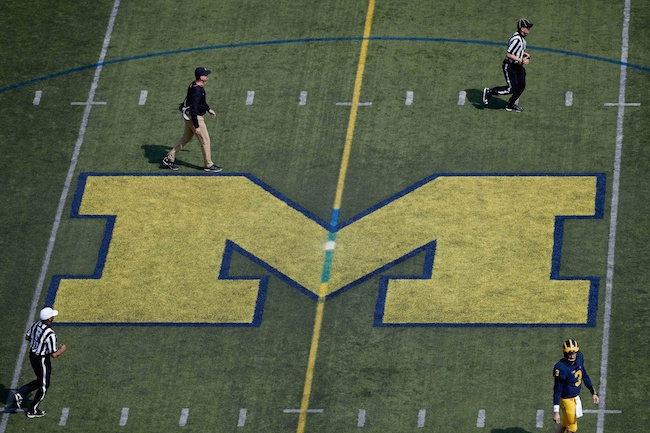 Comparing Harbaugh’s arrival at Michigan to Hoke’s wouldn’t be fair. Hoke was the out-of-nowhere candidate that amazed Michigan athletic director Dave Brandon so much that he got the job. Hiring a guy without any Power Five experience compared to hiring a guy like Harbaugh, who was arguably the top free-agent coach at the NFL ranks, was drastically different.

Having said that, Hoke became a household name when he won B1G Coach of the Year honors after leading Michigan to an 11-win season in Year 1. The Wolverines didn’t live up to expectations in Year 2 — Denard Robinson’s health played a big part in that — and hype for Hoke might’ve died down some, but the overall marks were still solid.

Obviously Harbaugh’s Year 2 — Michigan was a play away from going to its first B1G Championship — had a different feel than the 8-5 mark Hoke posted in his second season.

On paper, though, it’s hard not to notice the similarities between their first two seasons.

The recruiting rankings are an important factor in a coach’s perception. It’s easy to forget how much talent Hoke brought into Ann Arbor. As everyone knows, it was Harbaugh that got to coach and develop many of those recruits into NFL players. They were the foundation of his first two seasons.

The fact that Harbaugh won with Hoke’s roster is as big a reason as any that he’s considered the better coach. There are other factors that helped shape that perception.

A lot of the numbers in that table are surface numbers. For some athletic directors — and some fans — those eight metrics are the only ones that should be taken into consideration when evaluating a Michigan head coach. Well, and playoff/national title appearances.

Surely, plenty of Michigan doubters pointed out those numbers and predicted Harbaugh to follow in Hoke’s path.

But there’s more to it than that. For Michigan to truly be “back,” it must look the part of a national title contender. Dig a little deeper and it’s clear that Harbaugh’s team had the edge in that department.

The point differential is a key aspect of that. The Wolverines dominated in nearly all of their wins in Harbaugh’s Year 2, and looked every bit like a national power in the process. They ended their drought vs. top-10 teams under Harbaugh in 2016 — something Hoke failed to do — and probably should’ve ended it sooner.

Think about Harbaugh’s three losses vs. top-10 teams. One of them was the Michigan State miracle botched punt return in 2015. Another was the highly controversial overtime thriller in Columbus last year. The last one, was of course the Orange Bowl loss that saw Florida State score a go-ahead touchdown in the final minute. And by the way, that was without All-Americans Jabrill Peppers and Jake Butt.

It didn’t happen, but Harbaugh was a few unlucky bounces from starting 4-1 vs. top-10 teams and 7-1 vs. top-25 teams. Hoke never came that close.

RELATED: Michigan must improve in one crucial area before it can become elite

Hoke’s teams also never had national title aspirations heading into the Ohio State game. One could argue Michigan’s title hopes were still alive for The Game in both of Harbaugh’s first two seasons.

That’s maybe the biggest separator between their starts. Harbaugh’s perception is defined by more than his WWE mentality of calling out doubters or his revolutionary recruiting approach. If Michigan wasn’t in the title hunt in his first two seasons, those two things wouldn’t matter.

We don’t know how Harbaugh’s time in Ann Arbor will play out. It probably worries some Michigan fans that he hasn’t stayed at one place for more than four years. There are questions as to whether or not a guy without a college conference title is really as good of a coach as he’s portrayed nationally.

But after two years at Michigan, take a deep breath and know there’s one obvious thing that you can take to the bank.

Jim Harbaugh is a helluvalot better coach than Brady Hoke.