While annoying, the Jim Harbaugh-NFL rumors are good problem to have

They started flying as soon as Jeff Fisher was fired.

If you spent any time on Twitter Monday afternoon, you inevitably saw someone, somewhere say something like this:

There's surely a number somewhere between $10 million and $15 million per year that gets @CoachJim4UM to the @RamsNFL.

Hot takes were all over the place linking Harbaugh to the Los Angeles Rams. Many assume that Harbaugh wants back into the NFL and that Michigan was just a stepping stone to get there. Some assume that a man who has made tens of millions of dollars in his lifetime would be swayed by the almighty dollar.

None of that is based on anything factual. Until legitimate reports surface that Harbaugh has interviewed for an NFL job, it’s all just stirring the pot.

Michigan fans are inevitably anxious about the idea of losing someone who could be one of the great coaches in program history. That’s natural. If there wasn’t that feeling, it would mean that Harbaugh hasn’t done much since arriving in Ann Arbor.

But he has, and that’s why his name surfaced and will continue to surface in the NFL coaching pool. 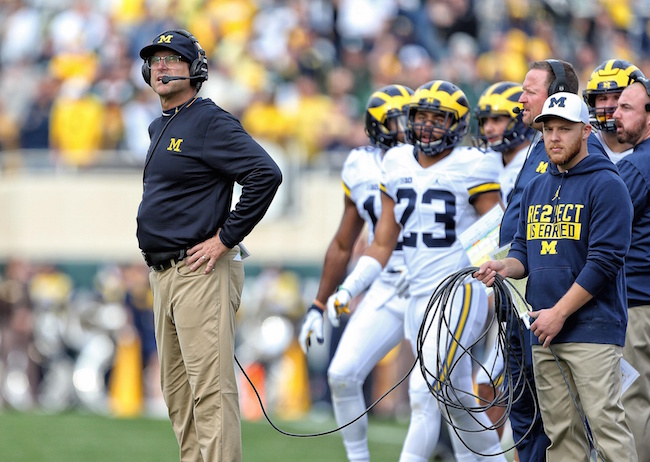 Only the great ones get that kind of call. Nick Saban knows about that. So does Urban Meyer.

When Michigan hired Harbaugh, the mission was obviously to compete for national titles with the Alabamas and the Ohio States. The program made a significant push to put itself in that conversation during Harbaugh’s short time in Ann Arbor. Like it or not, this is one of the things that comes with being a college football power.

This is unfamiliar territory for Michigan fans. Bo Schembechler and Lloyd Carr were both Michigan lifers. The NFL was never a legitimate threat to their futures at Michigan.

With the way Rich Rodriguez and Brady Hoke turned out, the last thing anyone was thinking about was whether or not they’d leave for the NFL.

This is a 21st century problem that every high-profile college coach has to deal with. Coaching salaries are at astronomical highs, and the thought of the Los Angeles Rams throwing eight figures per year at a coach seems realistic.

What doesn’t seem realistic, however, is the idea of Harbaugh bailing on the place he loves most to take on a disastrous NFL franchise. Sure, it’s Los Angeles. But do you really think Harbaugh is lacking in fame and star power? You can put him in Idaho and he’d still be one of the most polarizing figures in all of sports.

Or better yet, do you really think he’s a guy who bases his decisions on dollars and cents? And if money was an issue, Michigan would give him a blank check to stay. 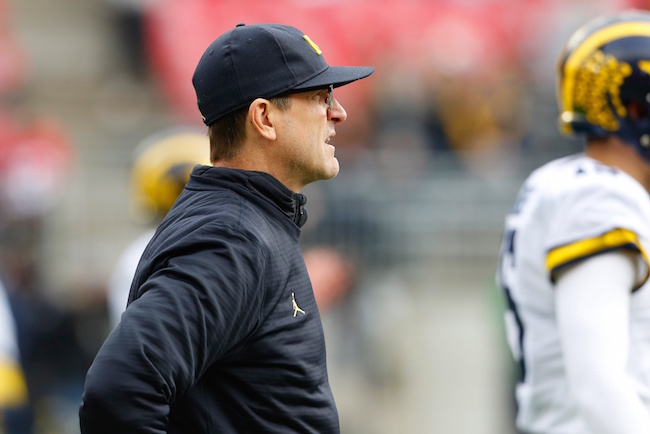 It took a messy fallout with the San Francisco 49ers for Harbaugh to realize that he wants control of his team. He wants to be able to do things his way, no matter how famous or rich he is. From recruiting to choosing to speak to the media, he wants to have final say in everything. There’s not an NFL team that would give him that kind of freedom.

If anxious Michigan fans remember one thing as these NFL rumors swirl, that should be it.

By all accounts, Harbaugh is having as much fun as ever doing things his way at Michigan. It helps when it yields results, too. Back-to-back 10-win seasons in the toughest division in college football is no small task. These aren’t even his players yet. Based on his recruiting efforts — another aspect of the job he appears to enjoy as much as anyone — the Wolverines aren’t going anywhere anytime soon.

Harbaugh came to Michigan to win a national championship. To his credit, he appears to be on that path. One of the things that any popular coach experiences on that path is NFL rumors. If Harbaugh wasn’t getting that kind of attention, it would mean Michigan was still stuck in mediocrity.

But don’t let the numbers scare you. Harbaugh has heard them before, and if he keeps winning at Michigan, he’ll hear them again.