You can say a lot of positive things about Jim Harbaugh.

He’s one of a kind. He’s changing the game. He’s a proven rebuilder of programs. He has a brand that’s second to none.

But even if you asked Harbaugh, he’d probably tell you that having never won a conference title in six seasons as a Power Five coach, he has some work to do before he’s at the top of the mountain.

That comment was sparked by Harbaugh’s recent Twitter back-and-forth with Florida State assistant coach Tim Brewster, who called out Michigan’s FBS-leading 11 draft picks for not winning the Orange Bowl.

Here was directly from Armour’s column:

If anything has become clear in the two years since Harbaugh returned to Michigan, it’s that he owns college football. Anyone foolish enough to try and test that is bound to lose.

Now, before you folks in Ohio, Alabama and the San Francisco 49ers front office start howling, hear me out.

Harbaugh was considered buttoned-up and humorless when he was at Stanford and in the NFL, as exciting as those khakis he loves so dearly. But returning to Michigan, the school where he spent his childhood and then played, has turned him into Ferris Bueller with a whistle.

Armour went on to write about how Michigan’s spring break trips to Florida and Italy have completely changed the dynamic during an otherwise stale time of year for college football.

She also referenced Michigan’s signing day event in 2016, and how in just two years, Harbaugh completely shifted the narrative of the program.

That case can certainly be made. Add in Michigan’s draft numbers — many of whom were Brady Hoke’s recruits that Harbaugh got to stay in Ann Arbor — and no one can argue that Harbaugh has done some impressive things.

But based on the ratio of replies vs. retweets, many would argue that a coach who has yet to beat his biggest rival or finish better than third in his own division doesn’t “own college football.” 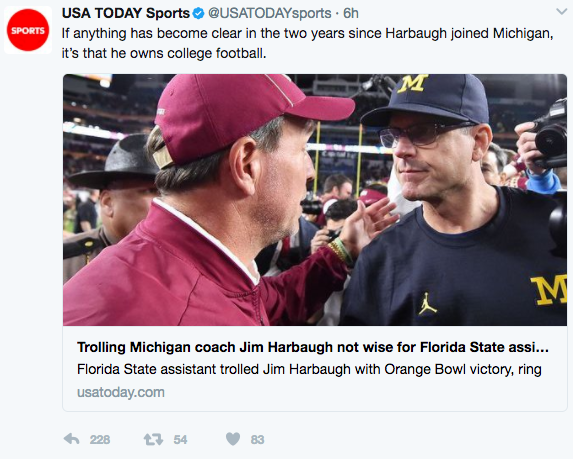 Harbaugh might own college football media and he might be the most captivating person in the sport. But “owning” is usually associated with dominating, and Harbaugh hasn’t done quite enough of that yet.

The whole column is worth a read, whether you’re a Michigan fan or not.