By beating Michigan State, Michigan clears another hurdle on ‘we’re back’ tour

By now, you’ve heard it enough.

We get it. The Wolverines are No. 2 in the country. In the first half of 2016, they destroyed teams like Bo Schembechler’s groups used to. They’re in the national title conversation. Hype, hype and more hype.

In October, it’s still mostly talk. The Wolverines could only do so much to show that they were indeed back. Beating Wisconsin — their first win vs. a top-10 team in eight years — was the first real sign of that.

The second hurdle was far more important. It didn’t matter that Michigan was taking on a 2-5 team Saturday. The Wolverines wouldn’t be considered “back” until they took down Michigan State.

Finally, they did that. 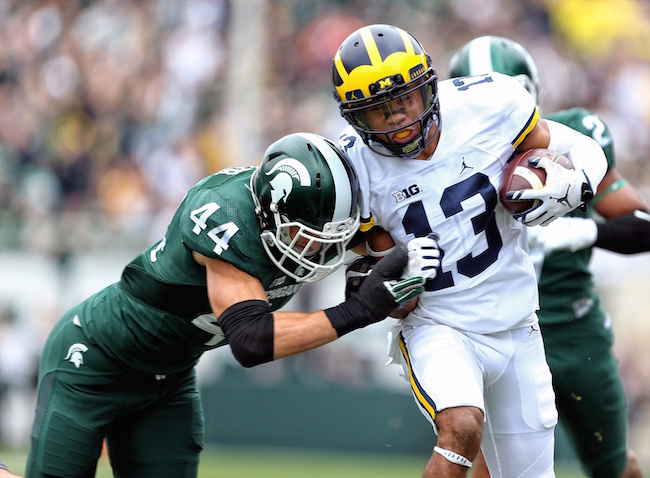 Even with five straight losses entering Saturday, some held on to the hope that Mark Dantonio had a few tricks still up his sleeve to stun Michigan. Again.

But the guy who always had Michigan’s number had nothing on Saturday. Dantonio knew he didn’t have the bullets to fire against Michigan. Even though he said that he “firmly believed” his team could beat Michigan — why wouldn’t he say that? — Dantonio saw what everyone else did.

He could’ve played all the disrespect cards in the world. For all we know, he fed his team every piece of negative content he could find. Despite a valiant comeback effort, it wouldn’t have pushed his team over the top.

Dantonio’s teams had never faced a Michigan group like the one they saw on Saturday. Michigan hasn’t had outside weapons like Amara Darboh and Jehu Chesson. The Wolverines haven’t had a playmaker like Jabrill Peppers, who added yet another notch to his Heisman Trophy campaign. They haven’t had a defense that could get after one of MSU’s quarterbacks like that.

That battle told you everything you needed to know about Saturday in East Lansing.

Dantonio tried out three different quarterbacks, partially because the Michigan defense swallowed Damion Terry whole. Before that, Dantonio threw Tyler O’Connor under the bus during the halftime interview for checking into a play that led to an interception. Rarely, if ever, do you hear Dantonio call a player out.

Brian Lewerke was the only MSU quarterback that got anything rolling. But even he fell victim to the dynamic, All-American playmaking ability of the Michigan defense.

It was fitting that MSU’s comeback bid ended on a Peppers sack. He’s the game-changer that Michigan didn’t have during those years of frustration against MSU. Dantonio knows that. Remember last year when he called TWO timeouts after Peppers entered the game on offense? That’s how big of a difference-maker Peppers is.

But Saturday wasn’t about one player solidifying a Heisman campaign (he did by the way). It was about Michigan finally living up to the talk. The Wolverines wouldn’t have had much to stand on if they somehow fell to the Spartans on Saturday. It would’ve been about as humiliating a loss as possible.

Instead, Michigan didn’t leave anything up to chance. There was more than a miraculous special teams play separating Michigan and Michigan State.

Jim Harbaugh’s most important victory to date was a nine-point win against a 2-5 team. Was it his team’s best game? Did Harbaugh twist the knife like many expected? Will people argue the Wolverines should bump Alabama off the No. 1 spot?

No, but that didn’t matter.

In Michigan’s race to return to national prominence, there was still a hurdle to clear in East Lansing. Michigan wasn’t “back” until that was cleared.

And this time, the Wolverines didn’t get tripped up in the final 10 seconds.