Surprisingly, Michigan didn’t run up the score on Rutgers; it was just that bad

Jim Harbaugh got a little fancy.

Up 27-0, he wanted to try out a fake field goal on an extra point. It was a low-risk play in a game that was already decided by the start of the second quarter. It worked.

What happened after that was complete and total destruction. The 78-0 Michigan victory was as one-sided a college football game as you’ll ever see. Michigan had 71 points before Rutgers even registered a first down. It was completely and totally embarrassing for Rutgers in prime time on ESPN.

But if you’re of the assumption that Harbaugh ran up the score, don’t be. It wasn’t like that. If it was, Michigan would’ve hit 150. The Wolverines were that good, and Rutgers was that bad.

Don’t try and convince yourself that Harbaugh tried to do anything more than get out of Piscataway with a blowout victory. The fact that he got Michigan’s most lopsided since 1940 was the result of a conservative second-half game plan. Really. 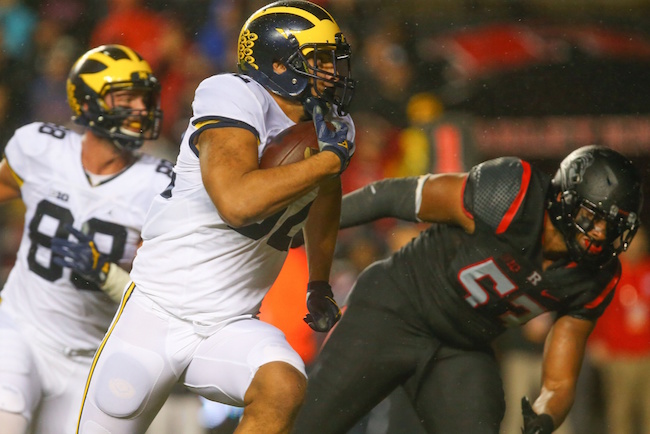 It was surprising. There were probably many that assumed Harbaugh would keep the foot on the gas, at least until he surpassed Ohio State’s 58-0 mark against Rutgers last week.

But Harbaugh didn’t have to do that. His third-stringers weren’t even a match for the Scarlet Knights in the state they were in on Saturday night.

For starters, the starters were out in the second half. Wilton Speight didn’t even play for the entire first half. Jabrill Peppers got some snaps at the wildcat. And of course, he dominated. Two of his three rushes went for a touchdown. The one that didn’t was a 63-yard run. Peppers was basically toying with the Knights.

It felt like all of Michigan was, and not in a disrespectful way. The Wolverines finished with nine rushing touchdowns. Should they have kneeled the ball instead? That would’ve been even more disrespectful.

A 601-39 yardage advantage was mostly because of the Wolverines running game.  They racked up 481 yards on 56 attempts. One of every six rushing attempts went for a touchdown.

Only two passes went for 30 yards or more, both of which came in the first half. They happened to be highlight-reel plays:

Michigan threw three second-half passes. Rutgers could’ve put its entire two-deep on the field and it wouldn’t have been able to stop the Wolverines.

Harbaugh actually brought in Shane Morris. If that doesn’t tell you how much he took his foot off the gas, then I don’t know what will.

If anyone was to “blame” for keeping the pressure on Rutgers, it was Don Brown. The Michigan defensive coordinator blitzed the occasional linebacker, albeit with backups. Still, it wasn’t like Peppers was taking down Chris Laviano in a 65-0 game.

It didn’t matter. Rutgers was as helpless as a team could be. It was a new low after last week’s embarrassment at Ohio State. This team has major issues without Janarion Grant right. Nobody knows when or if the Knights will score multiple touchdowns in a B1G game.

RELATED: After Michigan, Rutgers will have faced the toughest schedule in America

Even worse for the Knights was the fact that it was a major recruiting weekend. With official visitors galore, Rutgers looked like a high school team against the program Ash is trying to compete with. If Ash can sell a kid after that kind of performance, he’s the world’s best recruiter.

The unfortunate reality right now is that Rutgers is nowhere near the same stratosphere as Michigan. The Wolverines actually did the program a favor by not making it worse. Eventually, a defense can’t let a fullback dive turn into six.

Anybody that thought Michigan should’ve gone even more conservative, remember that second, third and fourth-stringers are competing, too. Just because Rutgers wasn’t competing doesn’t mean the Wolverines should’ve sat on the ball for an entire half.

So if you looked at the final score and assumed it was Harbaugh being Harbaugh, think again. It was just Michigan being Michigan and Rutgers being Rutgers.

Rutgers should be thankful Harbaugh — for once — showed some mercy.