It’s no secret that Jim Harbaugh plays it close to the vest.

He doesn’t reveal information unless he absolutely has to. That means he limits media availability, he avoids talking specifics about player suspensions and he doesn’t come out with a mid-week depth chart.

Instead of having a blank page in the game notes, Colorado sports information director Dave Plati decided to get a little creative. He took a stab at Michigan’s depth chart.

But instead of listing actual Michigan players, he listed a bunch of movie/television characters and celebrities. 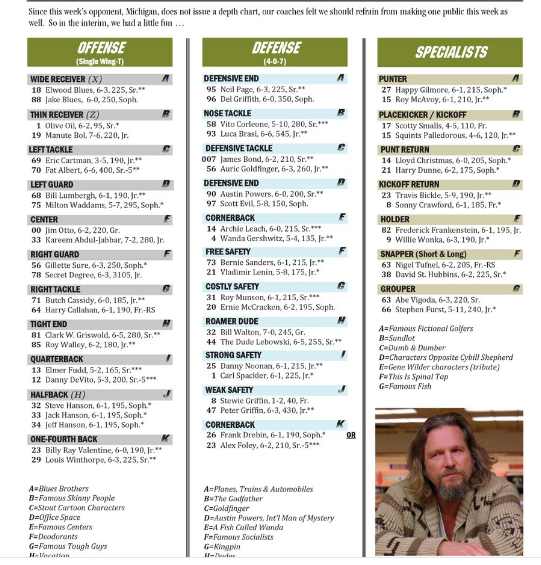 This roster might bring a lot of attention, but it could have some major personnel issues. How is Fat Albert not starting over Eric Cartman at left tackle? James Bond at defensive tackle? Wouldn’t he be better suited as a Roamer Dude?

And one has to think that Happy Gilmore and his hockey fighting skills would be much better suited at a tackling position.

Michigan still has a whole lot of talent on this roster. It remains to be seen whether or not that talent will actually translate on the football field.