As Michigan Stadium became a snow globe come to life, message board dreams became a reality.

No, it wasn’t the reality of beating Indiana. Though at one point on Saturday, a Michigan touchdown seemed like a pipe dream.

It was only two years ago that Michigan Stadium was in stunned silence after a loss to B1G newcomer Maryland. The reality was that it was Brady Hoke’s final game in the Big House. Michigan was just hoping for a bowl berth if it somehow pulled off a miracle in Columbus the following week. Meanwhile, the Buckeyes were in the midst of their national title run.

But when the final seconds of Saturday’s snow bowl counted down, that was the reality. Michigan fans chanted “Beat Ohio.” 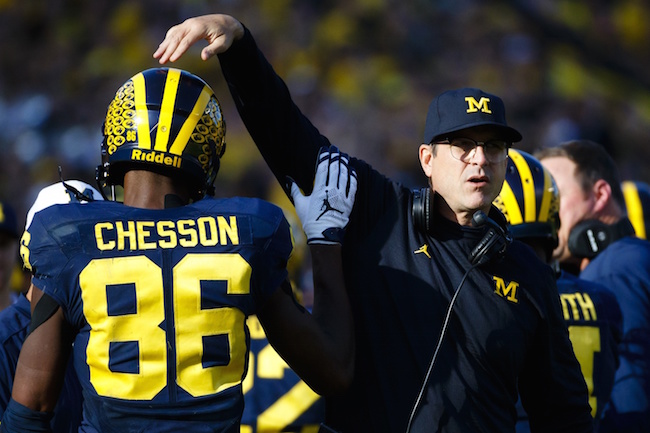 In Michigan’s perfect world, the “Beat Ohio” chants would’ve started much sooner than they did on Saturday.

Instead, the Wolverines had to grind out a win with their backup quarterback against an upset-hungry Indiana team. Two straight nail-biter games clouded what’s been a truly remarkable season for the Wolverines.

The body of work is worth mentioning because these past two weeks inevitably put a scare in Michigan fans. Trailing in the second half to Iowa and Indiana? What’s wrong with these guys?

Those concerns are natural. The offense obviously didn’t look in sync in John O’Korn’s Michigan debut. Against a talented Ohio State team on the road, that’ll obviously have to be fixed if the Wolverines have hopes of winning a B1G Championship and making the College Football Playoff.

But before getting caught up in the matchup next week, take a step back and appreciate the position Michigan is in.

This is everything the Wolverines wanted. Harbaugh was hired to be the Bo Schembechler to Ohio State’s Woody Hayes. For the first time in a while, Michigan isn’t ending the season talking about failed expectations or its promising incoming recruiting class. The Wolverines are no longer the underachieving power that dreams of being “back.”

Yeah, so what? Didn’t we realize this like two months ago?

Sure, that’s true. But Michigan still had an entire schedule to get through to get to this point. The B1G is having arguably its best year in conference history and the Wolverines made it to the Ohio State game with everything still in front of them. 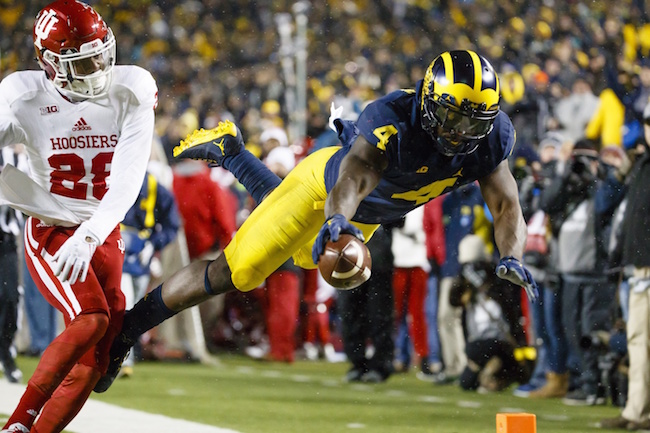 Michigan has been pushing to get back to this point for the last decade. Because of the new postseason format, we’ll never have a game with the stakes of that 2006 game. Without a conference championship game or a College Football Playoff, it was essentially a national semifinal.

Next Saturday will be every bit as meaningful for this program.

Before Indiana, Harbaugh didn’t talk about what a do-or-die Ohio State showdown would mean for obvious reasons. He still knew what it was setting up to be. After Saturday, he finally got to put Michigan’s position in perspective.

Harbaugh said this feels like 'one of the best wins I've ever been a part of … this was a playoff game.'

Michigan players understood what it means, too.

“It’s us and them,” Jabrill Peppers said of Ohio State. “The winner probably earns their spot in the College Football Playoff.”

There’s obviously still work to be done for the winner in the B1G Championship, but that’s what’s on the line next week. It’s as big as a regular-season showdown can get in the playoff era.

How big is it? College GameDay is heading to Columbus and dedicating FIVE HOURS to the pregame show. For the next seven days, Michigan and Ohio State will be the talk of the college football world. Everyone understands the magnitude of this chapter of the rivalry.

It’s been a long time coming for Michigan. Before the Wolverines can win their first national title in 19 years or win their first conference title since 2004, they have a simple task ahead. It’s the one they’ve been waiting for for the last decade. It came sooner than anyone could’ve imagined.

Beat Ohio and the dream continues.