When a muffed punt return for a touchdown, a last-second field goal or the officiating steals the headlines, it can go overlooked. Michigan’s losses, at least during the Jim Harbaugh era, seem to always be of the heartbreaking variety. Perhaps that makes it painful to look back at what really went wrong.

There’s a common denominator in Michigan’s losses the last two years. It wasn’t the officiating or a fluke play that doomed the Wolverines in each of those six losses.

If Michigan had just been average running the football, it wouldn’t have been in those situations.

The Wolverines’ ground game struggled mightily in each of their six Harbaugh-era losses. Not once did they average three yards per carry in those contests. They blew four different fourth-quarter leads, including three in 2016.

Nobody ever talks about the logic that if Michigan gains more than 17 yards on rushing plays in its final two drives against Iowa, that game isn’t decided by a last-second field goal. People forget that a Michigan three-and-out — two rushes for two yards — preceded Ohio State’s game-tying touchdown march at the end of regulation.

Yes, Michigan’s losses always seem to come down to inches. But until the Wolverines find ways to get consistent yards on the ground against top-25 teams — especially in crunch time — they won’t move into that upper echelon of college football’s elite. 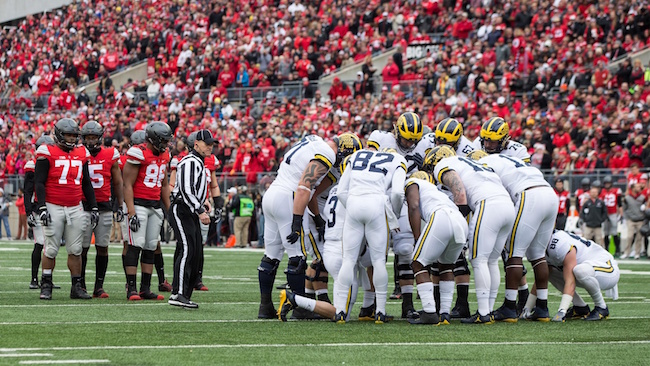 Michigan’s big-game running struggles were not the result of one specific person. Everyone involved in the offense was to blame. On paper, one might question why Michigan struggled up front in losses.

After all, the Wolverines scored more rushing touchdowns (41) than any B1G team and they finished fifth nationally in that category in 2016. They ranked 33rd in rushing yards per game, which was significantly better than the likes of national champion Clemson and B1G champion Penn State. No B1G team had a better red-zone offense than Michigan, either.

So what was the problem?

A lot of those numbers were the result of Michigan’s ability to run the ball in blowout victories. There were no shortage of those the past two years.

But look at Michigan’s rushing numbers in its victories compared to its losses the past two years:

The only time Michigan lost when it out-rushed an opponent during that stretch was the Michigan State game in 2015. And that was only a 62-58 advantage. In all six of the Harbaugh-era losses, Michigan failed to hit the century mark on the ground.

There’s obviously no rule that says a team must hit 100 yards rushing to win a football game. But it doesn’t take a brainiac to figure out that the team that struggles to pick up first downs in the fourth quarter of a close game is often the team that loses.

In Michigan’s losses, that theme almost always plays out. These are Michigan’s rushing numbers on designed run plays — quarterback scrambles and sacks don’t count — in the fourth quarter/overtime of its losses the last two years:

So yes, the numbers did improve in 2016. But Michigan still blew fourth-quarter leads in all three of those games.

It’s one thing to win a close game against a six-win Minnesota team in 2015 or against a 3-9 Michigan State team in 2016. It’s another to close out a quality, top-25 team and win a down-to-the-wire game.

Michigan’s best win of the Harbaugh era was against No. 8 Wisconsin last year. That was the first time Michigan beat a top-10 opponent since the first year of the Rich Rodriguez era in 2008.

But fittingly, it didn’t come as a result of Michigan wearing down a defense. A 46-yard touchdown pass to Amara Darboh in the middle of the fourth quarter gave the Wolverines the lead. An Odell Beckham-like interception from Jourdan Lewis sealed the victory.

A reminder for those questioning Jourdan Lewis’ height in the NFL. pic.twitter.com/5plsNh9XJp

Did Michigan get lucky? Absolutely not. The Wolverines earned the Wisconsin win and all of their other wins. There might not have been a better all-around defense than Michigan’s in 2016. The fact that nearly all of Michigan’s defensive starters are off to the NFL is nothing short of incredible.

Wilton Speight can have a Heisman Trophy season. Still, the Wolverines need to be able to run the ball down the stretch against quality teams.

Fortunately for the Wolverines, there’s hope.

The return of offensive line coach Greg Frey, who groomed All-Americans at Indiana, will be huge. He was a major part of the Hoosiers reaching consecutive bowl games for the first time in a quarter century. It’ll be his job to build up an inexperienced, but promising, new-look offensive line.

The backfield underwent on offseason facelift, too. Michigan lost its two most-experienced tailbacks in De’Veon Smith and Drake Johnson. The Wolverines also won’t have the luxury of Jabrill Peppers as a rusher/decoy, which often seemed like the only way to spark the ground game.

Whoever gets the bulk of the carries down the stretch — it could be a combination of Chris Evans, Karan Higdon and Ty Isaac — will have to be more productive than what we saw in 2016.

Michigan might’ve caught a few unlucky bounces, but it wouldn’t have been in those situations if it could’ve gotten the running game going earlier. More than anything else, that’s what kept the Wolverines from reaching the B1G Championship the last two years.

And as long as that trend exists, don’t expect Michigan to make any trips to Indianapolis.