Why Michigan’s road to Columbus, while friendly, might not be ideal

Two weeks ago at Rutgers marked Michigan’s only time leaving the state until the middle of November. The Wolverines didn’t exactly get a rude welcome in their first road test of 2016. In fact, Rutgers basically rolled out the scarlet carpet for each one of Michigan’s 11 touchdowns.

Did the Wolverines get better that day? Probably not. Will they get better when they host their fifth unranked foe at home on Saturday? Not likely.

Michigan drew a favorable schedule this year. The Wolverines, in all likelihood, will have faced one top-25 team before the regular season finalé at Ohio State. Wisconsin was a legitimate opponent and even Colorado is proving to be better than originally expected. But those were home games.

Trips to Michigan State and Iowa won’t show if Michigan is playing at a playoff level. Home games against Illinois, Maryland and Indiana probably won’t push Michigan to its limit, either.

Michigan has all the makings of a team capable of winning a B1G Championship and representing the conference in the College Football Playoff. We won’t know how the Wolverines stack up against OSU until that final game.

We have no idea how Michigan will respond against a quality opponent on the road, which is probably what it’ll have to do to earn a playoff spot.

Michigan’s schedule might’ve been viewed as a blessing, but it could wind up being a curse. 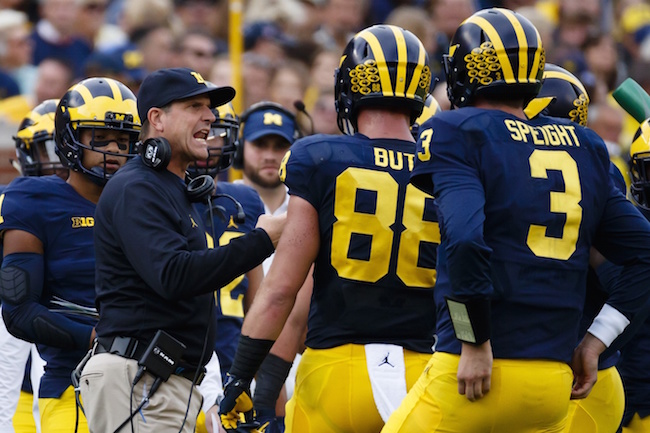 Jim Harbaugh’s debut with the Wolverines came in a raucous road atmosphere against a solid Utah squad. The attention of that night was more focused on Harbaugh. That was before we knew that Michigan would turn into a College Football Playoff contender.

Since that game at Utah, Michigan hasn’t been tested on the road. Look at the teams the Wolverines faced on the road under Harbaugh:

Michigan’s road opponents since the Utah game were a combined 24-34 overall and 9-26 in conference play. A 7-6 Penn State team was Michigan’s toughest road opponent in that stretch.

When Michigan travels to MSU and Iowa, both will undoubtedly be tough atmospheres. Still, neither are top-25 teams for a reason. Could the Wolverines get pushed and have to rally? Sure, but Michigan will still likely be a double-digit favorite for both of those games and have far more talent to fall back on. And rallying against one of those teams is a different ballgame than trying to do so against someone like Ohio State.

So what’s the point of all of this? Well, through no fault of its own, Michigan will be in unchartered territory when it travels to Columbus. The schedule set up well for wins, but not for quality wins.

Nobody is saying Michigan is overrated. The Wolverines have been dominant and deserve to be No. 3 in the country. But there’s no way for Michigan to simulate what Nov. 26 will be like in that atmosphere against that good of a team with that much at stake.

Ohio State, on the other hand, got to travel to Oklahoma and Wisconsin for prime-time showdowns against top-25 teams. A young OSU team grew up because of those two high-pressure road games.

Michigan won’t have that luxury. The way that the schedule played out this year was favorable for a team hoping to pile on the wins. Nobody minds an 11-0 start. The Wolverines wouldn’t surprise anyone if they stormed into Columbus undefeated and rightfully confident.

Harbaugh will exude that confidence. But for as much as attention Michigan’s Harbaugh-led turnaround gets, his team has yet to face a quality road test since Utah.

Michigan’s season will be defined by what it does in Columbus. If the Wolverines don’t beat Ohio State, win a B1G title and make it to the playoff, it’ll be a letdown. It won’t matter that they started 11-0 and spent most of the season as a top-four team. The odds of Michigan making the playoff field with one win vs. a top-25 team and no division title would be slim.