Once again, Michigan ends up on the wrong side of craziness

Sooner or later, it has to even out. Right?

The only way to describe the ending of Friday night’s Orange Bowl was fittingly frustrating. The Wolverines finally looked like they weren’t going to leave it up to chance. Finally, it wouldn’t be a last-second field goal or a controversial fourth-down spot that determined it all for Michigan.

There had to be Michigan fans thinking that when Chris Evans ran in the go-ahead score with a minute-and-a-half to play. Rallying from 12 down in the fourth quarter and taking a late lead was supposed to be it.

In many ways, that was the story of the Wolverines’ 2016 season. They sat at 9-0 with a chance to lose a game and still make the College Football Playoff. But a few plays was all it took to make that dream seem like a blur. 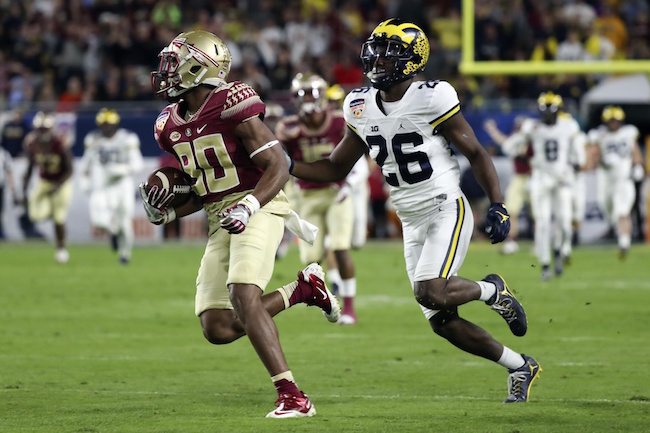 Michigan ended up on the wrong side of craziness before the ball was even snapped. We didn’t find out until a few minutes before kickoff that Jabrill Peppers was out of the Orange Bowl with a hamstring injury.

Some assumed it was a Christian McCaffrey/Leonard Fournette situation. Apparently that wasn’t the case at all and Peppers really did suffer a hamstring injury late in the week. Michigan conspiracy theorists were probably ready to point to that when Florida State came out firing.

But just in case Peppers was still the target of that hate, consider this postgame tweet:

Jabrill Peppers has tears in his eyes. Appears heartbroken he couldn't go. Says he has decisions to make.

We’ll never know what would’ve happened if Peppers had played. Maybe he would’ve had a head of steam of some of Florida State’s line-drive punts. Perhaps he could’ve sparked the offense when it couldn’t do anything in the first half. Maybe he could’ve tripped up Dalvin Cook on one of his long runs.

And just in case one catastrophic injury wasn’t enough, Jake Butt was lost for the game after a catch and run in the second quarter. Would he have provided the difference as Wilton Speight’s most reliable target? Perhaps, but we don’t know.

The amazing thing was, despite all of that — the Peppers/Butt injuries and the early hole — Michigan finally looked like it wasn’t going to make excuses and it was going to mount its biggest comeback of the Jim Harbaugh era. The chances were there.

But fluky things have a way of showing up for Michigan at inopportune times. Who would’ve guessed that Jourdan Lewis would get beat for the go-ahead touchdown? Or that Michigan’s kickoff coverage team would have a major lapse in the final minute-and-a-half?

Michigan’s backbreakers are never one thing. But there’s always something.

It’s amazing to think about a stat like this:

Harbaugh has 6 losses at Michigan. The Wolverines led in the final minute of 4 of them.

You can chalk that up to a variety of things. Maybe it’s the fact that the Wolverines don’t have a consistent run game that can close it out. Or maybe this year, it was the fact that Michigan had a bunch of home blowouts before the schedule got real at the end of the season.

Just don’t pin it all on the officiating. Could more calls have gone Michigan’s way? Absolutely, but there’s no guarantee that offsides call would’ve sparked a Michigan rally in the final 20 seconds.

It’s easy to look back on losses and handpick those moments. Michigan’s always happen on a national stage with Twitter referees firing away.

Let’s not call Michigan cursed or even unlucky. Lord knows Mike McCray was lucky to get that late Christmas gift in the third quarter.

Those terms are subjective. Perspective is important to remember with these first two Michigan teams of the Harbaugh era. Some might always think “what could’ve been.” That certainly applies to the 2016 team. There’s no easy way to swallow a 10-3 pill after a 9-0 start. 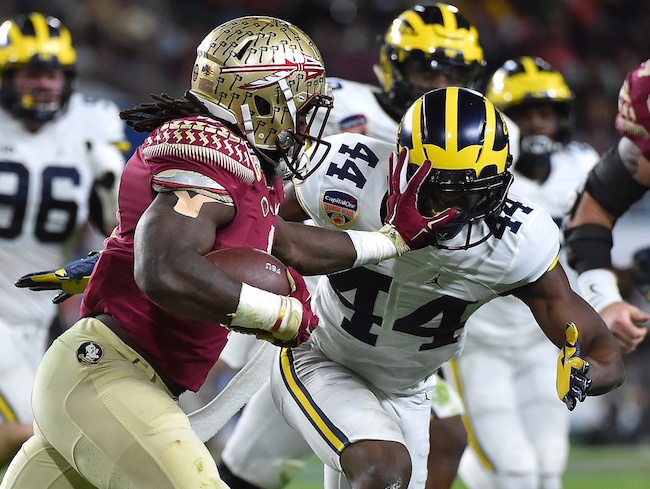 But that won’t numb the pain of Michigan’s defeats. Florida State added to the Wolverines’ collection of crushing losses of the Harbaugh era. It was a game that many will remember and point to one specific thing as the reason Michigan lost.

Michigan has become the face of crushing losses. That doesn’t usually happen to teams that win 20 games in two seasons or to teams with as good of a coach as Harbaugh.

The truth is, there’s no one rhyme or one reason for the crushing losses. If there was, Harbaugh would’ve found a way to fix it by now.