Wisconsin proves once again that it's legit, and now Michigan is, too

Michigan, on the other hand, hadn’t left Ann Arbor since its highly-publicized spring break trip to Florida. The Wolverines didn’t have a win vs. a top-25 team, either.

Still, it was Michigan that came into Saturday as the higher-ranked team and the 11-point favorite. Some were wondering how Wisconsin would handle this kind of test. Others wanted to see Michigan beat a team that’s actually competing for something in 2016.

Michigan got the win, and with it, a feather in its cap with the first College Football Playoff poll nearing. Wisconsin, for the first time all year, didn’t pull off the top-10 upset.

But somewhere in between Alex Hornibrook’s dime to Dare Ogunbowale and Jourdan Lewis’ Air Jordan/Odell Beckham pick, it probably should’ve hit you.

Both of these teams — with those defenses— are among the best 10 teams in the nation. If the first part of 2016 and Saturday told you anything, it should’ve been that Michigan and Wisconsin are both legitimate. 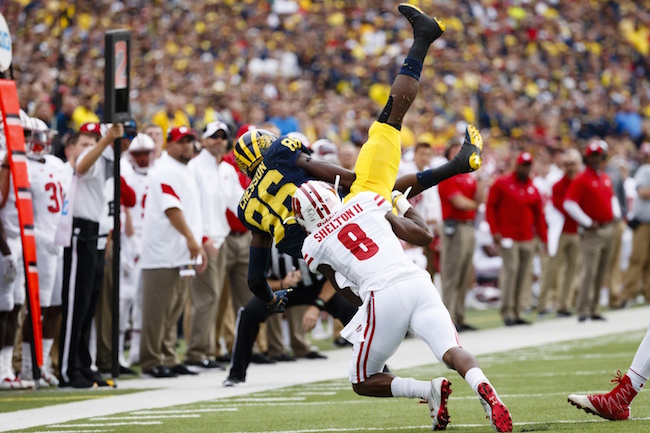 Add in some sub-freezing temperatures and it would’ve looked and felt exactly like a classic B1G showdown. In many ways, it was.

Both coaches played the field position game in the second half and let their defenses make plays. It seemed like if there was going to be a big play made in the fourth quarter, it was going to come on the defensive end. Wilton Speight’s touchdown pass to Amara Darboh didn’t really tell the story about the game that was.

This was a game in which both quarterbacks looked bothered throughout the afternoon. Alex Hornibrook was 9-for-25 with a touchdown pass and three interceptions. There were plenty of freshman moments for him in his second career start The top-rated defense in the country with 100,000-plus screaming fans behind it would make a fifth-year senior a little uneasy.

RELATED: Jordan Lewis makes one of the craziest interceptions you’ll ever see

And even though Speight came up with the big touchdown pass late, he spent his afternoon flustered by that vaunted Wisconsin defense. T.J. Watt was in his ear all game. So was Jack Cichy (that tip that led to the Derrick Tindal interception was a thing of beauty).

Does Michigan win that game more comfortably if it hits one of its three field-goal attempts? Certainly, but lets not pretend like this Wisconsin defense got lucky.

The Wolverines came in averaging 52 points per game. Even in games that they had been “out-hit,” they still found a way to hit the 50-point mark. Saturday was different than anything Michigan had seen all year on that side of the ball. To their credit, the Wolverines made enough plays on offense to win.

But Wisconsin has now held three top-10 opponents to less than 14 points. All of those came away from Camp Randall Stadium, too. If anybody was somehow still waiting to see if Wisconsin was for real, Saturday showed just that. If the Badgers take a steep hit in the rankings, it’ll only be because voters haven’t watched this championship-level defense play yet.

For Michigan, beating a team like that legitimizes the top-five ranking. The Wolverine defense is every bit as dominant as it was hyped up to be. They’ll see better offenses this year, but that was still a Wisconsin team that hung 30 points in East Lansing.

With its first top-10 win since 2008, Michigan has indeed turned the corner. The Wolverines are legitimate national title contenders now. Nobody should question whether or not this team will be battling Ohio State for a B1G East crown in late November.

The same goes for Wisconsin. Who would’ve thought that the Badgers would head into the Ohio State game 4-1 with the lone blemish being a seven-point loss at Michigan? Few, if anyone, had that kind of projection.

It would be interesting to see both of these teams compete on a neutral field. A lot would have to play out for that to happen. Michigan would still need to finally take down Ohio State. And Wisconsin could need to win out and beat Nebraska in the process.

Saturday should’ve showed that both of these teams are in it for the long haul. If they play their cards right, they’ll meet again in a couple months.