There’s plenty of excitement over the renewal of the Michigan-Notre Dame rivalry.

The two historic rivals will meet in 2018 for the first time of the Jim Harbaugh era. Naturally, the Irish are already marketing it as one of their headliner games.

But Notre Dame isn’t exactly hyping the Michigan showdown in a traditional sense yet. For now, it’s just being used in recruiting.

Four-star IMG Academy cornerback Houston Griffith, the son of Big Ten Network analyst Howard Griffith, shared some mail he received from Notre Dame. It was a sports card, similar to what many teams likely send recruits.

It had Griffith’s background information and it even forecasted what his freshman season (2018) would look like in South Bend. 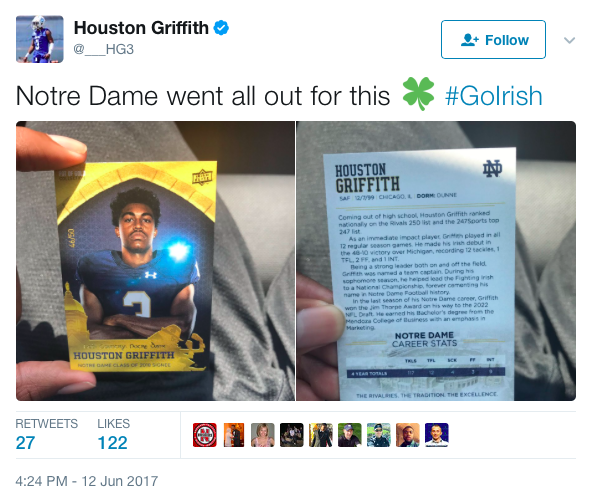 You might notice the score of that Michigan-Notre Dame game.

So yes, the Irish are selling recruits on the vision of not only beating the Wolverines, but hammering them 48-10.

For what it’s worth, Notre Dame is coming off a four-win season while Michigan is 20-6 in the Harbaugh era. Michigan also leads the all-time series 24-16-1, though Notre Dame won the last matchup 31-0.

Interestingly enough, Griffith is being recruited by both Michigan and Notre Dame.

Perhaps his tweet will cause Michigan to promote the matchup to recruits with a different final score.