Just because something has been done before doesn’t mean it’s likely to happen again.

When news came out earlier in the week that Wilton Speight was reportedly out for the season — Michigan still won’t confirm that — the attention shifted to John O’Korn. Many are expecting the former Houston transfer to get at least one start and possibly more.

The question was asked, then quickly answered. Has a backup quarterback ever come in and led a team to an incredible late-season run? Yes, of course. It was only two years ago that J.T. Barrett went down against Michigan and Cardale Jones became the toast of the college football world.

So naturally, this question surfaced:

John O'Korn time. Can he be Michigan's version of Cardale Jones as late-season replacement? https://t.co/lCissLOWz6

In Michigan’s ideal scenario, yes. O’Korn would step in and dice up the best defenses in the country en route to a national title. For all we know, he has that in him. We might not really get an answer to that question unless O’Korn starts against Ohio State.

But O’Korn doesn’t have to be Cardale Jones 2.0 for Michigan to reach its ultimate destination. The belief that Michigan’s playoff chances rest on O’Korn’s shoulders are not fair. Could he play a big part in that? Certainly, but he doesn’t have to be the driving force behind some historic run. 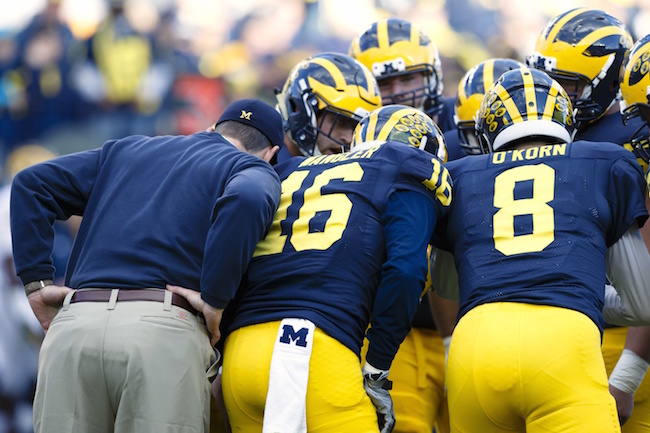 If you’ll recall, Ohio State’s 2014 run was much more than Jones. That offensive line cranked it up to another level in those final three games. And remember Ezekiel Elliott? He AVERAGED 232 rushing yards and nearly three scores per contest in OSU’s postseason run.

It was also the coming-out party for the Ohio State defense. Against three high-powered offenses, the Buckeyes allowed an average of 18 points per game. They forced turnovers, they dominated the line of scrimmage and they didn’t allow long scoring drives.

That’s what Michigan needs to fall back on if it wants to make its own postseason run.

The Wolverines got to 9-0 because of their defense. And frankly, they were a last-second field goal away from being 10-0 coming off an 11-point output. They still have the nation’s best third-down defense (19 percent) and the nation’s best red-zone defense.

Those are the areas that Michigan must continue to succeed in to make a late run. Is Michigan going to need O’Korn to make some big throws in key spots? Absolutely. But if the Wolverines take care of business on that side of the ball, those high-pressure moments won’t be as frequent.

And if ever there was a reason to put more emphasis on the ground game, this is it. Michigan couldn’t run the ball against Iowa.

Michigan might not have an Elliott, but it does have several capable backs. No other B1G team has four players with at least 400 rushing yards. And that was with Speight under center, who is durable but not as mobile as O’Korn.

O’Korn — if he plays — will present a different look than teams have seen out of Michigan all year. That’s obviously why Harbaugh is keeping this so close to the vest. If he plays his cards right, he’ll have Indiana’s and Ohio State’s defensive coordinators watching game film from O’Korn’s Houston days and Michigan’s first 10 games.

Defenses are going to try and make O’Korn beat them. Eight-man fronts will be common. You can bet that Don Brown is sending the kitchen sink at O’Korn in practice. By all accounts, O’Korn has handled this situation well.

If O’Korn is the guy, he’ll have to be as poised as ever. He’ll be asked to make smart decisions in high-pressure situations unlike anything he’s never experienced. Harbaugh will stand behind him the same way he stood behind Speight when he pegged him as the Day 1 starter.

But don’t assume that O’Korn needs to match arguably the best start to a career in college football history in order for Michigan to win a national title.

Jones had plenty of help. If Michigan reaches that ultimate destination, O’Korn will, too.