By now, you know that the letter ‘M’ isn’t to be used by Ohio State this week.

Ohio State crosses out the letter ‘M’ on everything. Go on OSU’s campus and you’ll see it crossed out on everything from university buildings to speed limit signs.

Naturally, OSU wanted to show that anti-Michigan pride off on Monday morning. From their official Twitter account, Ohio State football showed those crossed-out ‘M’s across campus: 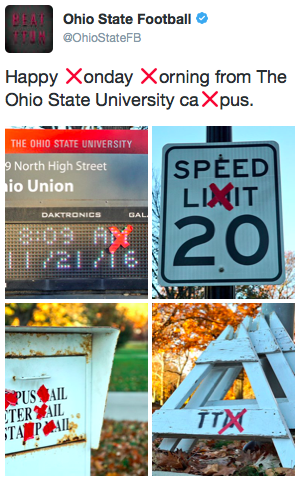 What’s the problem, you ask? Well, Ohio State crossed out three ‘M’s. But for whatever reason, the ‘M’ in the word ‘from’ wasn’t crossed out.

We gave OSU plenty of time to delete the tweet, but the mistake wasn’t caught. The original tweet was posted early on Monday morning, as mentioned.

OSU is going to great lengths to let everyone know it’s rivalry week. Everyone makes typos, it’s just odd that OSU’s official account was blind to an obvious one.

But if that’s the biggest loss of the week for the Buckeyes, they’ll take it.