The Michigan redshirt sophomore already became the first player to win three B1G individual awards, including the conference player of the year. In case you haven’t heard, he’s also up for the Heisman Trophy.

But Pro Football Focus Big Ten analyst Josh Liskiewitz isn’t buying it. As in, he isn’t buying Peppers as an elite defensive player, nor is he buying him as one of the nation’s top-five players.

In fact, when news came out about Peppers’ Heisman nod, Liskiewitz tweeted that he’s not even a top-six player on his own team:

Jabrill Peppers was like the seventh best player on his team

For the record, Liskiewitz has seen every snap Peppers played this year. Yes, all 933 of them. And if any Wolverines fans are wondering if Liskiewitz has a reason to not buy into Peppers, consider this; he’s a Michigan grad.

We gave Liskiewitz a chance to defend his strong stance on why Peppers is getting too much hype. Here’s what he had to say about Michigan’s first Heisman candidate since 2003 (interview shortened for length):

SATURDAY TRADITION — So why do you hate Jabrill Peppers?

LISKIEWITZ — Hahaha, I’m glad you started with that because I think the bigger point is that you can be an outstanding player and not be a Heisman finalist. It’s a real thing. It’s possible. I fully expect people to look at it as me hating on Jabrill, but that’s not the case.

There’s a lot of awards we are gonna give him. Our All-B1G team just came out. He was our All-B1G slot corner, which is one of about 10 different positions he played. We’re in the process of writing up a number of awards and he’s going to win the award for most-versatile player. He was also our B1G punt returner of the year.

So it’s not like he’s a bad player. I think the bigger point is that there were a lot of really, really strong defensive players in college football this year, and I think a couple were deserving of being considered for the Heisman, one of them being Jonathan Allen, the defensive tackle from Alabama. I’m all for defensive players being up for that award. I think it needs to happen on a regular basis.

So when he’s a glorified defensive back — yes, they put him at linebacker but he’s not a true linebacker — I just don’t see the full impact he has…I just don’t see how anybody can watch every single game he plays and think, ‘Yep, he’s the standout guy on that defense.’ 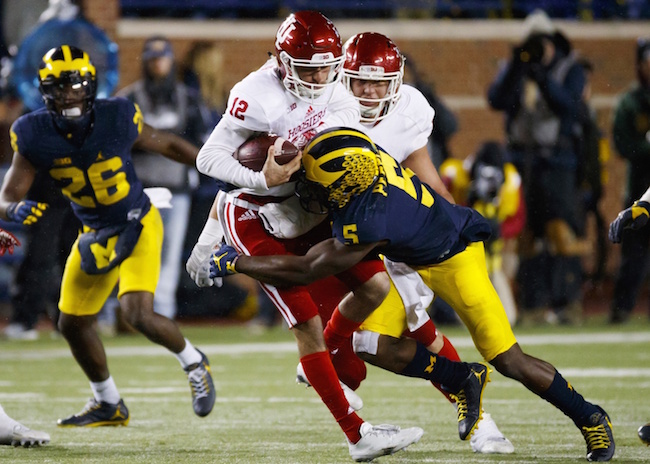 ST — Really, though? The seventh-best player on his own team? You can make the case for six guys being better than him?

LISKIEWITZ — I think I could. To be fair to Peppers, there’s a level of him needing to be accounted for by defenses that isn’t really going to be captured in our grading.

But when I look at what Channing Stribling did at corner without Jourdan Lewis for part of the year…Jourdan Lewis has been the best cornerback in college football the last two years. When you have two corners like that, I don’t get how Peppers is considered better than them.

ST — What’s the biggest thing you think Peppers struggles with on defense?

LISKIEWITZ — Anytime he’s going backwards. Anytime he’s in coverage, I think he’s shown some deficiencies. I don’t think he shows the same level of instincts as he does going forward. He’s had a number of coverage busts, whether the defenses have exploited them or not. Colorado certainly did.

When he is making plays going forward, that’s fine, but it’s not like he’s defeating blockers to get there. So many of his pressures — and he has a bunch of them — were unblocked. Most of his tackles for loss were unblocked. Now a lot of them are instinctual plays where he’s just getting there before the blockers do, and that certainly counts for something.

But he’s not a guy that I want taking one-on-one on a blocker, hoping he sheds to make a play. That’s just not gonna happen with him on a consistent basis at all.

ST — So I’m guessing you didn’t have him as your B1G Defensive Player of the Year? If you were giving that award out to one player, who would it be?

LISKIEWITZ — That’s a tough call. I would’ve gone with either Nathan Gerry of Nebraska or Jake Replogle of Purdue. Those two guys were absolute standouts all year. Obviously Replogle was in a tough situation at Purdue, but I think he elevated everyone else around him. I believe he was our top-graded interior defender in the country, even ahead of Allen.

Gerry was just such a force in the back end. He’s excellent against the run and he’s outstanding in coverage…I want to say quarterbacks had a rating in the 20s when throwing at him (ratings in the 30s are throwing the ball away).

ST — The B1G Defensive Player of the Year sort of has to have that national reputation. Do you think that helped Peppers win an award like that?

LISKIEWITZ — I don’t think there’s any question about that. I think that’s always the case…I don’t know if it was just the fact that Peppers played so many different positions and he’s such a great athlete. Everybody loves watching an athlete like that.

I think that has a lot to do with that. But when you look at that defense, the real MVPs of that defense were Jourdan Lewis and Taco Charlton.

ST — Doesn’t that add to it, though? Does the simple fact of being able to throw a million things at Peppers and that he can just dissect any given part of a playbook and play that position successfully, do you think that in itself is the sole reason he’s in New York?

LISKIEWITZ — I don’t think there’s any question that’s worth something. But I think there’s a level of romanticism of a defensive guy who can contribute on offense. People see him returning punts and making these ridiculous cuts, leaping over defenders.

The first game of the season against Hawaii, he leaped over another defender. That kind of set the stage.

ST — Let’s say I’m giving you the ability to pluck one person from the B1G and say, ‘You’re going to New York.’ Who’s your guy?

LISKIEWITZ — I would take Curtis Samuel. You talk about versatility, he had 1,500 yards from scrimmage and averaged about 120 per game.

You think about what you got with that Buckeye offense when you really break it down — yes, they got good running from the quarterback and Mike Weber as well — but that passing game, there wasn’t that much outside of the Oklahoma game.

Samuel was the receiving option. Look at their loss against Penn State. He had the huge touchdown run and then they only ran him twice more that game. I think that’s a big reason why they lost that game.

They beat Michigan in double overtime. Who got the game-winning touchdown? That’s my guy if I’m sending a B1G-er to New York.

ST — People assume Peppers is going to the NFL after this year. Barring a miracle, he will. I’ve seen the Tyrann Mathieu and Patrick Peterson comps. Not to just stick with Arizona Cardinal DBs, but what’s the main comp you’ve seen for Peppers?

LISKIEWITZ — Well, it’s funny because it’s actually another Arizona Cardinal that I see a lot of Peppers in. Deone Bucannon is the one I’ve seen the most of. It’s telling because he was a safety in college and he became a linebacker in the NFL, but he’s a guy that can cover. Well, he doesn’t stand out in any one thing he does, either.

Peppers is a significantly better athlete than Bucannon. But to me, there’s a level of worry that there should be. When NFL teams look at Peppers in coverage, they need to decide if part of his struggles back there just because he’s not big enough to be a true linebacker. He’s just not big enough. That’s never gonna happen and that’s fine.

Are those coverage issues just a matter of him having to do so many different things? Is what he was asked to do in college just not compatible with what we’re doing here. They’re going to need to look at a lot of film on him.

I think teams need to do a lot of research and decide if Peppers is getting better in coverage. I know he was at No. 21 on our draft board. Even that, boy, I’d be a little scared to take him that high.