When I looked at Michigan’s 2016 schedule, I assumed that the Wolverines wouldn’t have a headliner game until they traveled to Michigan State in the last week of October. I looked past the non-conference slate and the three B1G teams that began the season outside of the top 25.

That meant that Wilton Speight would have seven weeks to ease into his role as the starter before his first major showdown. Many liked the fact that Speight and the Wolverines would have to leave the state of Michigan once — to go to Rutgers — until mid-November. That’s a dream schedule for a preseason title contender and for a first-year starting quarterback.

So, I — among others — jumped the gun on that one. Speight’s real first test is on Saturday against a Badger defense that’s as battle-tested as they come.

A few days ago, the Badger defense gobbled up first-year starter Tyler O’Connor, who already had wins at Ohio State and at Notre Dame under his belt. Even without captain Vince Biegel, who will be out with a foot injury, Wisconsin intends to do the same to Speight.

Just like they did for O’Connor, the Badgers can present Speight with many of the same problems. The blitzkrieg of Wisconsin linebackers in the backfield is enough to make any quarterback uncomfortable, much less one making his fifth career start. 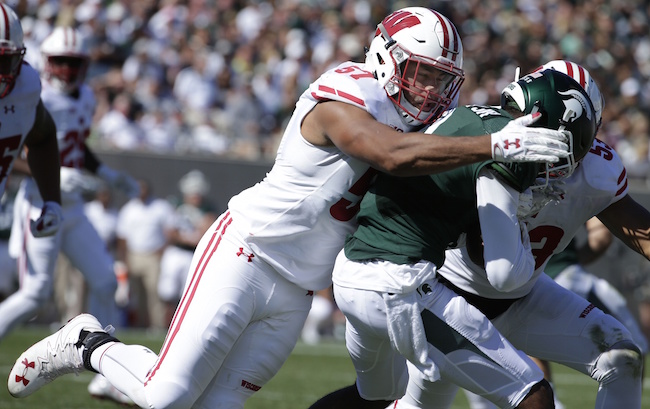 The Wolverines haven’t allowed many sacks this year (five in four games), but they haven’t seen a group blitz like Wisconsin will. Compare that to last week against Penn State when Speight faced three non-starting linebackers. He joked that Michigan ran the same play eight times in a row and that he couldn’t help but laugh.

Wisconsin’s defense is no joke. The Badgers pressured O’Connor on 51 percent of his drop backs last week. He was so out of rhythm that when he finally got time to throw in the fourth quarter, he didn’t see wide-open receivers.

We haven’t seen how Speight responds to that kind of pressure. He doesn’t have the world’s quickest delivery, and his pocket presence is still a work in progress.

Jim Harbaugh knows that. He also knows that empty-backfield and four-wide sets aren’t ideal for keeping a quarterback upright against a blitz-happy defense. Speight will have to know where his protection is at all times, especially in obvious passing situations.

That’s really where Wisconsin thrived against MSU. In third-and-five or longer, O’Connor was 2-for-8 for 30 yards with two interceptions and two sacks.

So far, Speight has been productive on third downs. Michigan is seventh in FBS with a 54.4 percent third-down conversion percentage. Wisconsin, on the other hand, is 11th in defending third down.

Will there be a noticeable differenence in that department without Biegel? Perhaps, but while Biegel is arguably the best player on that side of the ball, there are plenty of other Badger defenders who have been disruptive. Biegel is actually tied for ninth on the team in tackles and he was only responsible for just two of Wisconsin’s 21 tackles for loss. T.J. Watt, Jack Cichy and T.J. Edwards are all plenty capable of pinning their ears back in getting to the quarterback.

The other question is whether or not Michigan’s receivers will be able to get open in those critical spots. Derrick Tindal and Sojourn Shelton are ballhawks unlike any the Wolverines have faced in 2016. And if there’s any hesitancy from Michigan’s veteran receivers on balls thrown in between the hashes, it’s likely because they know what D’Cota Dixon is capable of.

The easiest way to get heat off Speight, of course, is by running the ball effectively. The likes of Leonard Fournette and LJ Scott didn’t have any success doing that against the Badgers. Achieving some sort of balance against this unit would be an accomplishment in itself.

Even if Michigan establishes the run, there will be moments in which Speight will have to come up with a big throw in a big spot.

Speight’s goal on Saturday is simple — handle the pressure, and get out with a quality victory against a quality team. By now, he’s probably heard a million times about how Michigan hasn’t beat a top-10 team since the Rich Rodriguez era. For Michigan to truly be considered a title contender, that drought obviously has to end on Saturday.

The time has come for Speight and the Wolverines to truly show that they’re back. It just came four Saturdays sooner than we all expected.