Wilton Speight didn’t have to throw the ball deep much last week. When you win by 60 points, five-step drops in a season opener don’t seem like a risk worth taking, especially for a guy making his second career start.

This Saturday was a different story.

Speight got more opportunities to step into throws and take shots downfield. For most of the afternoon, he was successful doing that. Jehu Chesson, Amara Darboh and Jake Butt were floated passes in-stride and Michigan’s offense looked up to snuff.

Speight did something that took Jake Rudock arguably half a season to do.

Reminder: It took Michigan every bit of 6 weeks to hit a pass like that last year. Speight's timing is on point early in week two

Speight led Michigan to a victory with his arm. By day’s end, he had four touchdown passes, 312 passing yards and no turnovers in a 51-14 Michigan win.

You might not have noticed, but Michigan absolutely needed Speight to lead the offense on Saturday. The Wolverines ran for less than three yards per carry in the first three quarters. De’Veon Smith is still not at 100 percent, Ty Isaac still doesn’t look like a feature back and Michigan’s biggest running plays are still coming from  receivers.

And on the flip side, Michigan allowed 252 yards rushing in the first three quarters. To UCF. There’s no way the Wolverines should be getting dominated at the line of scrimmage like that. Those issues have to be ironed out before Michigan starts B1G play. 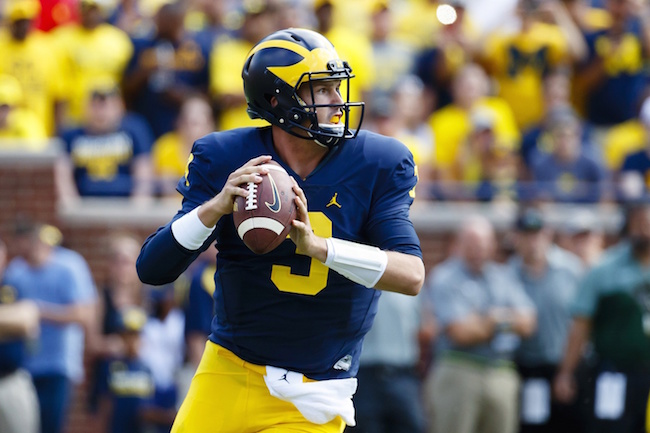 That’s perhaps the thing that can put this Michigan team ahead of last year’s. When last year’s group struggled to run the ball, it lost. Simple as that. The Wolverines ran for 2.5 yards per carry in losses last season.

Speight showed on Saturday — against a lackluster UCF team — that he’s capable of leading the offense. People might just chalk those up as typical numbers you’d expect to see from a quarterback of a top-five team.

But Speight looked comfortable.  The coaching staff needed to see what kind of touch he put on a deep ball with a real blitz. By most accounts, he passed that test.

The beauty of Speight’s situation was that the schedule allowed for this kind of development. The first-year starter likely isn’t going to see an above-average pass-rush for several weeks. He didn’t have to start his career on the road like Rudock did. Instead, he got to operate in the comfort of his own home without worrying about what game flow would dictate.

It’s a luxury that few teams have. Michigan’s defense is good enough that Speight shouldn’t be put it many tough spots early in the season. Piece by piece, Jim Harbaugh is going to continue to open up the playbook for him.

Speight is going to have to do a lot for this team if Michigan is going to reach its College Football Playoff aspirations. There was a feeling that whoever was named the Wolverines’ starter was ticketed for success. While that might be true, we still had to see it.

On Saturday, we saw it.