Like Jake Rudock before him, Wilton Speight maturing at perfect time

On the calendar, it was two months ago.

Wilton Speight dropped back for his first pass as a starter for Michigan in 2016. Adrenaline pumping, Speight made an awful read. He expected an interception on his first play to warrant a verbal beatdown from Jim Harbaugh. Instead, Harbaugh smiled and let him know that he was going to make mistakes.

It was a similar approach to the one the Michigan took with Jake Rudock last season. After Rudock struggled against Utah, Harbaugh stood by him. Rudock, of course, was arguably the most-improved player in the B1G. Few players in the conference transformed over the course of season as much as Rudock did.

In a dominant showing against Maryland on Saturday, Speight looked far different than he did in early-September. They said on the ESPN broadcast that it felt like that first interception from Speight was “light-years ago.”

Even though that isn’t the right use of “light-years,” the point was understood. Speight is the latest Harbaugh pupil to show dramatic midseason improvement.

That’s not a bad sight in the first week of November. 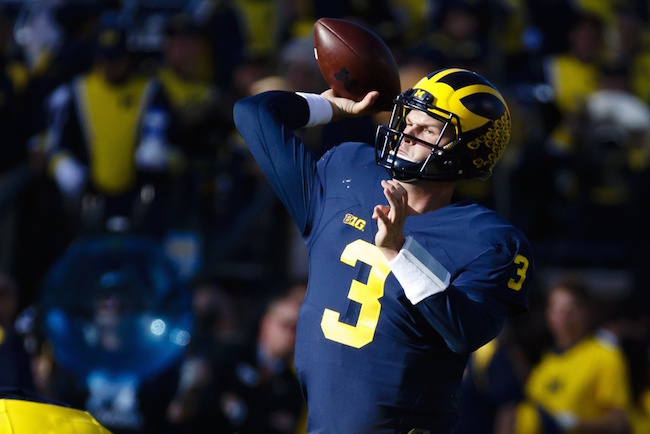 Man will look at the box score from Saturday and think the obvious.

“Michigan whips another weak B1G opponent. How many weeks until they play Ohio State?”

The Wolverines were indeed far more talented than Maryland. If Michigan didn’t win by three touchdowns, it might’ve been viewed as a letdown. That obviously wasn’t an issue after about the first 20 minutes.

Having said that, Maryland still could’ve given Speight problems. The Terps came into Saturday ranked No. 17 in passing yards allowed. Keep in mind that they stymied the B1G’s two leading passers. Yes, they were without two starting defensive backs on Saturday, but they were last week at Indiana, too.

Whatever the case, Speight diced up the Terps.

Whatever throw he wanted, he got. When he needed to buy extra time in the pocket, he evaded the Terps pass rush and kept his eyes downfield. When he got a clean pocket, he dropped dimes. Like, a lot.

Fast start for No. 3 @umichfootball.@WiltonSpeight finds Amara Darboh for the early TD. https://t.co/FaP0UOIgMh

It seemed like every ball Speight threw in the first half was an on-target strike. Check downs, fades, posts…you name it, he hit it.

How good was Speight? By halftime, he had 292 passing yards and three touchdowns. That was a Michigan record by 30 yards. Without much throwing in the second half, finished the day with a career-high 362 yards.

It actually could’ve been a much better day than that. Speight connected with Drake Harris on a bomb, but it was called back on a borderline offensive pass interference. He dropped one into the arms of Jake Butt, but the All-American couldn’t quite come down with it.

Did Maryland’s defense apply the pressure that Speight will inevitably see at Ohio State? No, but one couldn’t help but notice his improved pocket presence. The game looks like it’s slowing down for Speight. The Ben Roethlisberger comparisons never looked more legitimate than they did on Saturday.

Even NFL players noticed how much Speight developed:

lol @WiltonSpeight got to have the best deep ball in country

It wasn’t long ago that teams like UCF loaded the box and dared Speight to throw it deep. To his credit, he took advantage of that.

It wasn’t long ago that Speight was battling for the starting job. To his credit, he took advantage of the opportunity.

There’s this assumption that whoever takes over the starting quarterback job at Michigan is destined for massive improvement. While Harbaugh is obviously known for molding quarterbacks, there’s no guarantee that dramatic improvement happens. It’s not easy to develop as a first-year starter playing under that kind of spotlight.

But in the first week of November, Speight certainly looks like a different quarterback than he was two months ago. DJ Durkin found that out the hard way on Saturday.

As Michigan makes its November playoff push, Durkin won’t be the last victim of one of Speight’s aerial assaults.