Ranking coaches in the B1G can be a pretty easy task. It’s easy to place a number beside a guy, failing to give any reasoning behind his placement on a “power rankings,” list.

At Saturday Tradition, though, we don’t want to just give you the rankings. We want to provide you with a detailed description of each head coach and why he’s ranked in his selected spot.

This was a practice that was kicked up from the ground last year and, since there’s still several months until football season gets underway, it’s worth revisiting. So, let’s continue our 2017 #B1GCoachRank:

Where team was when he was hired: Mediocre at best.

Once upon a time, Michigan State was a team that missed three consecutive bowl berths. The John L. Smith era closed with the Spartans losing eight of their final nine games to cap a four-win season in 2006. The program had one coach since 1973 that stayed more than five years.

In stepped Dantonio, who didn’t exactly set the world on fire in three seasons at Cincinnati, but he did produce the program’s first winning season in 23 years. He was also five years removed from helping Ohio State win the 2002 National Championship as the team’s defensive coordinator.

Dantonio, a former Michigan State assistant, might not have been the splashiest hire but he certainly proved to be the right hire.

Everything that happened on that cold, damp day in Columbus was perfectly fitting for the Dantonio era. The Spartans went into Columbus as heavy underdogs against the unanimous preseason No. 1 Buckeyes. MSU wasn’t given much of a shot to win that day with first-team All-B1G quarterback Connor Cook sidelined.

So naturally, Dantonio turned to the defense and the running game to do the heavy lifting. And to the surprise of the college football world, that plan worked. The Spartans stymied the Ohio State rushing attack, which was led by Ezekiel Elliott and J.T. Barrett. Michigan State won the battle in the trenches and found a way to put themselves in position to stun the Buckeyes in the final seconds.

You could make a solid argument that at the time, losing to Central Michigan at home in 2009 was more embarrassing. But the Illinois loss this past season got the nod for a few reasons.

For starters, MSU and Illinois was such a basement matchup that it was bumped to ESPN News for a noon kickoff. That was embarrassing in itself for an MSU program that some believed could win the B1G again.

There was also the fact that MSU faced a 2-6 Illinois team that was outscored 81-25 the previous two weeks. On top of that, the Illini started a freshman making his third career start. It was a prime chance for MSU to finally end its 0-5 start to B1G play.

The Spartans actually got a go-ahead touchdown in the final three minutes. Then they committed two costly pass interference penalties and allowed Illinois to score the game-winning touchdown on a quick, four-play, 75-yard drive.

And just to twist the knife a little deeper, that loss officially eliminated MSU from bowl contention for the first time in the Dantonio era. Rock. Bottom.

The winningest senior class in Michigan State history (2015) was a byproduct of the gems Dantonio landed 2011. It wasn’t hyped as one of Dantonio’s best — it ranked 32nd nationally — but it was certainly one of the more productive recruiting classes in recent memory in the B1G.

Here are some of the future stars Dantonio signed in 2011:

Thomas was the only four-star recruit of that bunch, yet that core played a big part of winning two B1G Championships. Groups like 2011 helped earn Dantonio the reputation as someone who could maximize talent as much as any coach in college football.

What could get him fired: Man, that’s a tough question to answer right now.

In the beginning of the offseason I wrote that I thought as long as Mark Hollis was at MSU, Dantonio’s job was safe. Keep in mind that was after a disastrous 3-9 season. Dantonio earned the right to turn around the program again just like he did 10 years ago.

That was before MSU embarked on an offseason that was even more disastrous than the regular season.

Since the end of the 2016 season, 10 Michigan State players either transferred or were dismissed from the team. That includes the three players who were kicked off the team after they were charged with sexual assault for an alleged Jan. 16 incident. Add in Auston Robertson, who was kicked off the team after his own sexual assault case, and that’s four Spartans who were booted after being charged with sexually violent crimes.

MSU’s issues — off the field — would have to continue into the 2017 season for the “Fire Dantonio” conversation to gain legitimate momentum. The Spartans can miss two more bowls and Dantonio could probably keep his job if his team stays out of legal trouble. But if this type of behavior becomes the norm for MSU, Dantonio’s days are numbered. 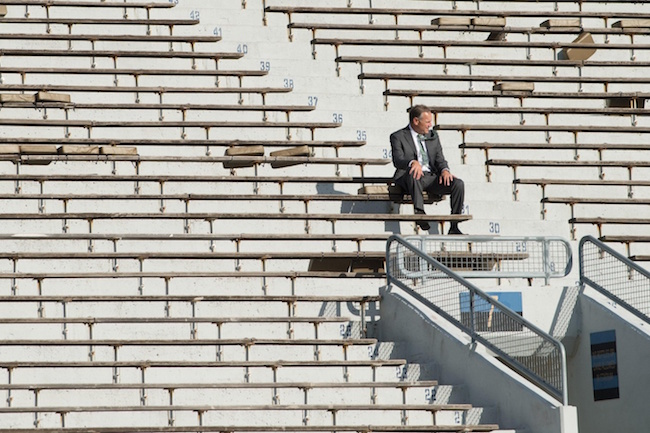 Why he’s at No. 2: It’s easy to be a prisoner of the moment with Dantonio. I can already see the Facebook comments.

“Did they beat any B1G teams besides Rutgers?”

“Lol. His program is in shambles right now.”

It was one awful year. Dantonio is not getting a free pass for that. His reputation took a serious hit — locally and nationally — for all of MSU’s offseason problems. Elite coaches aren’t supposed to have years like that.

But he’s at No. 2 because his résumé still trumps every B1G coach not named Urban Meyer. Entering 2016, his team had three straight top-six finishes. Dantonio led MSU to a Rose Bowl victory, a Cotton Bowl win and a College Football Playoff berth during that stretch.

One season didn’t throw all of that out the window. If it did, we’d just rank B1G coaches in their team’s order of finish every year.

Will Jim Harbaugh or James Franklin pass Dantonio in the next year or two? Possibly. They both caught up a lot on the last year, but they still have some more catching up to do.