It appears many followers of the bizarre Connor Cook free-fall have had a similar reaction in the last 24 hours.

“Ohhhhhhhhhh, now I get it.”

“It” is understanding why a quarterback once projected as a borderline first-rounder fell all the way to the third day of the draft. Everybody knows about the rumors of Cook’s off-the-field personality, all of which came from anonymous sources. But even that didn’t seem to explain the whole story.

DetroitSportsRag.com uncovered the secret truth about Cook’s dad, Chris. They did some digging and found out that he’s been sending sexist, racist, bigoted tweets for years.

Here are some of the ugliest tweets that DSR discovered from Cook’s now deleted account (NSFW): 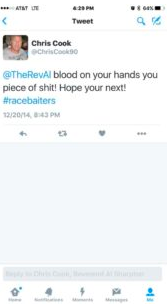 So yeah, Cook’s dad has issues. DSR reported that it’s widely known in East Lansing that parents avoid sitting near him during games. He’s hardly the first or last crazy parent to attend a sporting event.

Let me make the following clear: I’m not condoning anything Chris Cook ever said, tweeted, mumbled under his breath or yelled from the rooftops. That behavior is immature, and frankly, extremely embarrassing.

But if Cook was indeed passed on because of his dad, then that’s a bit ridiculous.

RELATED: Todd McShay has a surprise B1G player in his way-too-early 2017 mock draft

Nobody needs to be reminded of the pitfalls of social media. Laremy Tunsil did that for us all last week. Even Cook himself was in hot water earlier in his career for some of his tweets.

Having said that, don’t assume that Chris Cook’s social media tirades plummeted his son’s draft stock. This is the 21st century, where players of parents often misuse their Twitter accounts to tweet what they yell at their TVs. Organizations deal with trolling fans across all of their social media platforms. Chris Cook is barely a blip on their digital radar.

You can probably look up and down the first round and find parents who are overbearing and under the impression that their son should’ve been the top pick. We all know Chris Cook is one of those parents. His social media bashing of any media member who says something negative about his son proves that. 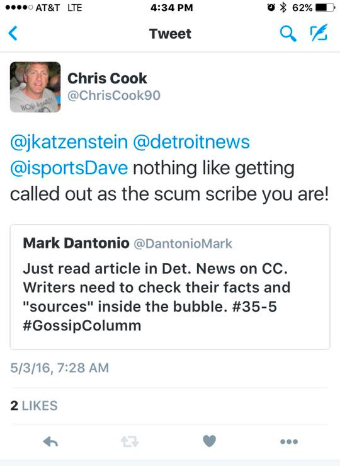 Still, it couldn’t have been a major factor in Cook’s free-fall. And if it was, why?

Why are we to assume that this is an “apple-doesn’t-fall-from-the-tree” case? It shouldn’t be. Assuming a player’s father is representative of his personality makes no sense. There have been high draft picks with fathers who murdered, raped and stole. That didn’t hold them back. And Chris Cook’s behavior, while disgusting, shouldn’t have held his son back from being drafted in the first two days.

If you want to point to Cook’s 56-percent passing as a senior, that’s fine. If you want to say that he was an unfortunate victim of a shallow quarterback class, be my guest. If you want to hold on to the notion that the captaincy thing dropped him three rounds, I’ll even allow that. For all we know, it was a combination of those things that prevented his accomplishments from doing the talking.

But let’s not take the easy way out and assume that Connor Cook’s dad was responsible for the free-fall. Detroit Sports Rag shed some light on an unknown detail of this saga, and after Cook dropped, that’s exactly what we were looking for.

Just don’t add those two facts together and decide this mystery is solved.