The focus entering Saturday’s spring game at Michigan State was on the guys who weren’t on the field.

Three unnamed players and one assistant weren’t going to be in action because they were suspended during an ongoing sexual assault investigation. We didn’t get any closer to getting a resolution to that on Saturday.

But we did get closer to resolving the MSU quarterback battle. And for at least one afternoon, Brian Lewerke gave Spartan fans some hope for the future.

Lewerke, who entered the spring as Mark Dantonio’s top choice to win the job, looked like a guy who was ready to make that next step. He was poised in the pocket, he went through his progressions and he delivered on-target throws.

Was he perfect? Of course not. Two interceptions in a spring game isn’t a big deal, especially working with a young group of receivers. Still, there was much more good than bad. That sentence hasn’t been said or written  about MSU football very much since the end of the 2015-16 season.

Positives have been hard to come by lately in East Lansing. It’s early, but Lewerke certainly looks like he can be a bright spot in 2017 and beyond. 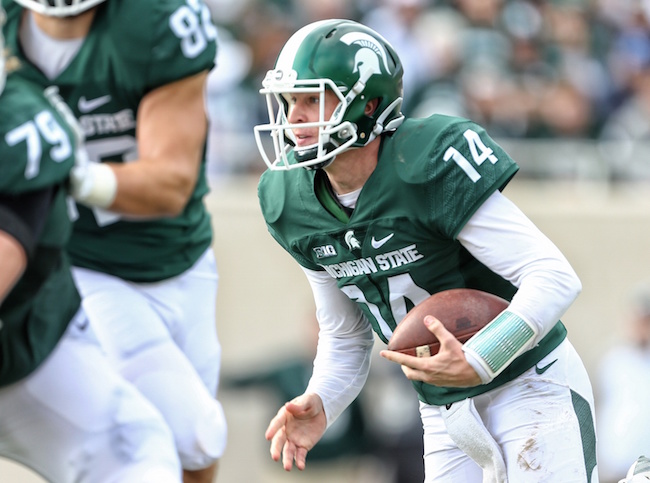 Saturday was a prime opportunity for Lewerke to get some separation in the quarterback competition. Damion Terry was still sidelined after postseason surgery while Messiah deWeaver was out with an injury, according to color commentator and former MSU linebacker Darien Harris.

Lewerke came out like a guy who was ready to take the reins of the starting job. Mark Dantonio said that Lewerke had a mistake-free first drive.

With a relatively unproven group of receivers, there was a clear go-to guy established early. Trishton Jackson caught just about everything thrown in his direction, including a 39-yard reception on Lewerke’s first pass of the afternoon.

Go figure that the play of the day, a one-handed grab from Jackson on a Lewerke pass, didn’t even count:

Regardless of the penalty, that play was one of several times that Lewerke worked the sideline well. He showed that he could make what Harris called “NFL throws” on back-shoulder fades. That’s a good foundation to work with.

It was obvious that there were still some chemistry issues. He threw an interception on the first play of the second quarter on what looked to be a miscommunication between he and his receiver.

It’s spring football and Lewerke is a sophomore. That happens.

What you didn’t want to see was a guy that looked like the game was too fast for him. If a spring game is too fast for a quarterback, he has no chance in the fall. In a controlled environment, the game looked like it slowed down for Lewerke.

He wasn’t lost without his two best offensive weapons — Corley and LJ Scott — on the field. Speaking of that, Madre London looked like a man in search of more work in 2017. He ripped off 127 yards on 15 carries, including this 75-yard score.

London, Lewerke and Jackson all showed flashes of play-making ability. MSU obviously needs much more of that in 2017.

But perhaps most importantly, MSU needs a guy under center that’s calm, cool and collected. Harris brought up a couple of good points about Lewerke on the broadcast. One was that his level doesn’t change much. He doesn’t get too high and he doesn’t get too low.

Another thing Harris brought up was a story about former MSU tight end Josiah Price. Apparently the other day, Price was in need of a guy to throw him balls for a workout. He called up Lewerke and he was there in five minutes.

That’s the type of personality MSU needs in a leadership position right now.

These are uncertain times. Having multiple players and an assistant involved in a sexual assault investigation is extremely serious, which Dantonio reminded everyone earlier in the week. For the first time in a long time, there’s major pessimism surrounding the Spartans.

Dantonio even pulled out the microphone and tried to pump up the 25,000 fans (approximately) that showed up to Spartan Stadium on Saturday afternoon. Compare that to the 51,000 fans that were on hand last year (that was good for seventh nationally).

Optimism is hard to come by after a 3-9 season. It’s even harder to come by when you’ve had the offseason that MSU has had.

Lewerke reminded MSU fans that regardless of what happens off the field, there are at least a few reasons to be optimistic about might happen on the field in 2017.