A lot has been made about the line for the Michigan-Michigan State game.

The Wolverines were originally 18-point favorites, but that line is all the way up to 24.5 points. Given how dominant Michigan has looked and how lackluster Michigan State has looked, that’s not much of a surprise.

Some are believers that you throw everything out in a rivalry game and expect the unexpected. That’s all Michigan State can hope for because if the first part of 2016 suggested anything, things could get out of hand for the home team on Saturday.

Having said that, we don’t know what’ll happen. Michigan could continue to demolish lesser-skilled teams and finally get revenge on Michigan State. On the flip side, it would be the most Mark Dantonio win ever if the Spartans knocked off Michigan.

Either one of those storylines could play about and you’d still see national pundits saying they weren’t surprised. That’s rare for a game with a 24.5-point spread. Perhaps there’s no safe bet.

But there’s one thing you can count on. The battle for the Paul Bunyan Trophy is going to be an ugly one, one way or another. 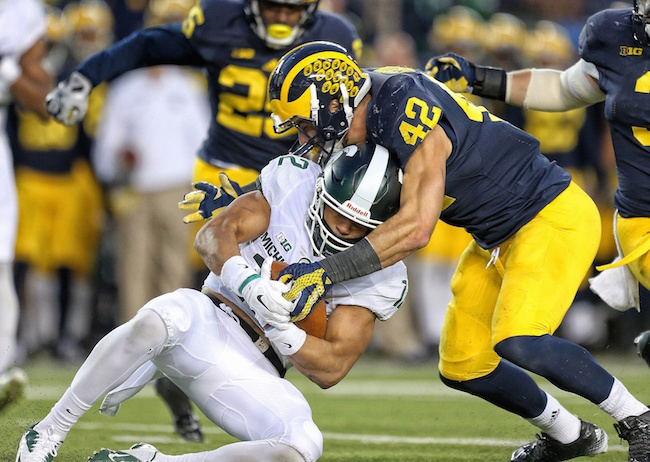 A rivalry game is ugly? Real bold, guy. Next you’re going to suggest that there’s no love lost and that there’s some extra juice for this one.

That’s obvious. But this year’s showdown has different implications than previous years. More juice. Less love lost. Given what’s on the line for both teams, any scenario will be more painful for the loser than most years.

Let’s say that chalk plays out. Michigan strolls into East Lansing, routs MSU and continues its undefeated start. MSU would suffer its sixth straight loss, and worst of all, it would be at the hands of the Michigan. If you think those boo birds were loud against BYU, just imagine how loud they’d be for another sub-par effort against Michigan.

RELATED: Mark Dantonio: I firmly believe we can beat Michigan

And on the flip side, what are the chances Michigan is cordial in defeat? If Harbaugh has a chance to run up the score, you can bet he will. That would create an ugly scene in itself. MSU already committed its fair share of personal foul penalties in 2016. Count on a few more if Michigan starts to run away with it.

And if Michigan did cruise, how many “little brother” quotes would you see? You’d lose count.

That’s what happens when a team finally gets over the hump. Michigan thought that was last year. Then the unthinkable happened:

You’ve been seeing that clip all week. You’re going to see it again all day Saturday. Michigan has been desperate to make that play a thing of the past. Until the Wolverines beat MSU and end the losing streak, it’ll haunt them.

The relief Michigan fans would feel to shake off that debacle would inevitably yield some gloating. After all, it’s a rivalry.

But there’s also the other scenario to consider. What if MSU somehow knocks off Michigan? The MSU seniors would have their fourth straight win against Michigan. It would be their best moment in a season full of disappointment. You know they heard about the Wolverines handing them a long-awaited beating.

I can picture the postgame quotes now.

“Nobody believed in us.”

“We still own the state of Michigan.”

You couldn’t blame an MSU player for saying that. Riley Bullough, who’s about as politically correct as any MSU player, even admitted that there’s extra motivation knowing the Spartans can spoil Michigan’s season.

And for Michigan, falling to MSU yet again would be crushing. Having the unbeaten season end after being a 24-point favorite would be more brutal than last year’s loss. Tempers would flare on the Michigan sideline if that nightmare became a reality.

Both of these teams have visions of ending losing streaks that they’re tired of hearing about. One of them will look back fondly on Oct. 29, 2016. It’ll mark a turning point. Weeks or years of frustration will end.

One will dominate the news cycle and have bragging rights for another 12 months. You can say that about every rivalry game, right? That’s true, but given the circumstances, there’s a different feeling heading into Saturday.

Regardless of how things play out, expect plenty of fireworks in East Lansing.