Whatever chip Michigan State once had is now gone

For the third straight week, Michigan State had zero fight.

Absolutely none. When times got tough, MSU got conservative. When the Spartans needed to get a third-down stop, they couldn’t get off the field.

Nothing went right. Well, at least for the stretch from MSU’s first possession to the final five minutes of the game. But that was far too late.

BYU came into East Lansing and handed a lost team its third straight loss. That doesn’t happen to Mark Dantonio’s teams. They’re supposed to do the little things and take care of business at home.

Instead, the Spartans showed once again that they’re a long way from the MSU program we’ve grown used to seeing. Forget preseason rankings or even September rankings. It’s time to seriously adjust expectations in East Lansing. 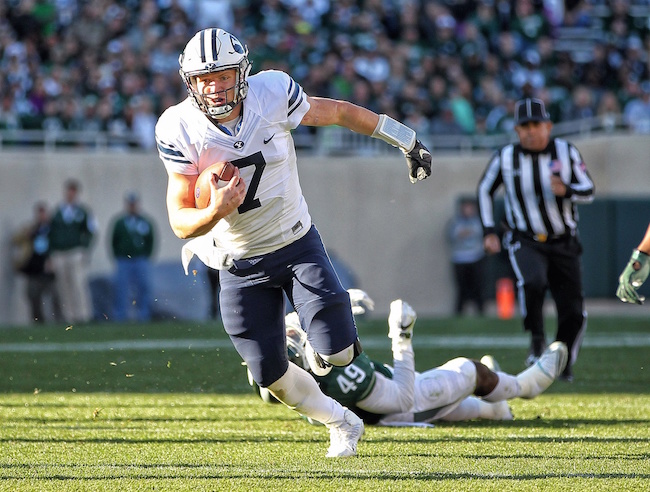 If you watched the first MSU possession, you probably told yourself that everything was going to be OK. Tyler O’Connor looked like he was in a groove converting three third-downs. The running game was rolling with Gerald Holmes, who capped off the drive with the game’s first touchdown. It was actually MSU’s longest possession of the season.

Ah, a sigh of relief.

But that was short-lived. O’Connor couldn’t convert a third down to save his job. Literally. He failed to convert his next seven third downs and was subsequently pulled for Damion Terry. And then Terry, of course, was picked off.

It was an unusual sight. Even in the rare instance when MSU quarterbacks struggled, they always seemed to have the ground game to fall back on. But that was also non-existent following the opening drive.

The Spartans couldn’t get anything going with Holmes. And what happened to MSU’s bevy of tailbacks? LJ Scott must be in some sort of a doghouse again because he only got three carries for nine yards. And any mobility that O’Connor had is clearly gone.

MSU lacks a go-to possession receiver, a guy who can get him the ball and a line that can give him time to throw. No wonder this team is so awful on third downs.

It’s probably unfair to single out the offense because the defense is just as guilty. What’s the trend with this unit in all three losses? The defense completely falls apart down the stretch. It doesn’t matter that it gets off to a solid start.

The Spartans have no fight, nobody stepping up and nobody capable of making big plays. Is that all because they’re without Riley Bullough and Jon Reschke? That might have something to do with it, but it can’t be all of it. 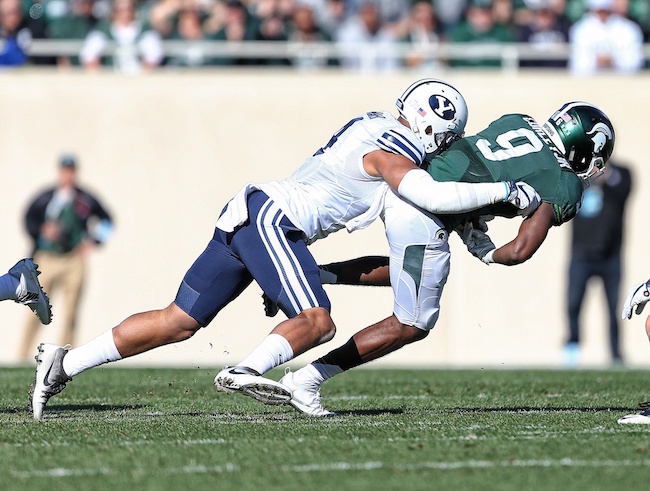 The Spartans made a name for themselves last year by winning six games decided by seven points or less. Whenever this group finds itself in a close game, it crumbles.

That’s blame on everyone, including Dantonio. He’ll be the first to admit that.

It’s rare to see this kind of a drop-off from a team that’s months removed from a College Football Playoff berth. But MSU is in the midst of some kind of funk right now.

The troubling thing is that the schedule won’t be kind to the Spartans. They still have showdowns against Michigan, Ohio State and they have to travel to Maryland and Penn State. All of those teams would be favored against the Spartans right now.

This is unlike anything Dantonio has ever been through in East Lansing. At least in 2012 and 2009 those losing streaks involved close games that didn’t go MSU’s way. That’s not the case at all with this team. The Spartans are just getting beat by teams that want it more.

Nobody knows what the exact fix is for this group. The Spartans problems are deeper than a couple linebacker injuries or a quarterback switch. As Dantonio said before Saturday, it’s a variety of things that plagued the Spartans.

Dantonio’s teams always thrived on people not believing in them. Well, the Spartans got their wish.