It was six weeks too late, but Michigan State finally stopped the bleeding

Seven straight losses, zero wins at home vs. Power Five teams and a complete, team-wide collapse. From powerhouse to doormat. From force-to-be-reckoned with to punchline. From title contender to toilet bowl participant.

The fall of Michigan State was as sudden as any we’ve seen in college football. Heading into Saturday, MSU was set to host a Rutgers squad that was awful by its own impossibly low standards. And still, it was considered a coin-flip game on College GameDay.

Don’t let your calendar fool you. The last two months were more like two years for Michigan State.

But on Saturday, the Spartans did the very thing that they made look so difficult in 2016 — win a football game. 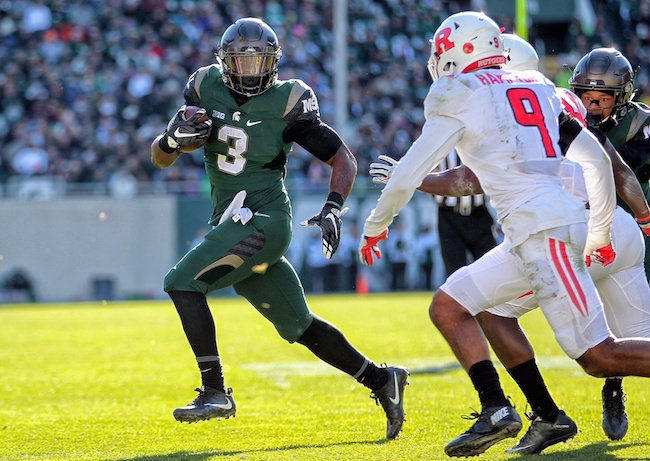 MSU finally delivered a laugher to a fanbase that probably forgot what joy felt like. Their first B1G win didn’t provide any moment that made an MSU fan think the unthinkable.

“We can’t lose to Rutgers at home, right?”

That was the thought all week, but it certainly wasn’t on Saturday. For the first time all year, the Spartans did everything right on offense. A defense that didn’t have Malik McDowell was pretty solid, too.

Yeah, it was Rutgers. But it was also Michigan State.

The old “winning games isn’t easy” cliché was the story of MSU’s season. If there was ever a year to appreciate the value of a win, this was it. How much did MSU appreciate a blowout win against Rutgers?

Mark Dantonio: "It's a good feeling. You woulda thought we won a championship in that locker room."

MSU still has seniors that are playing their final games in green and white. The team still has underclassmen looking to solidify starting jobs for next year. Spartan Stadium, somehow, still has 70,000 fans — give or take — showing up on fall Saturdays.

This team still had plenty to play for. Even with bowl eligibility out of reach, that was obviously on the minds of MSU players on Saturday. If it wasn’t, they would’ve mailed it in like they did a few other times in 2016.

Instead, it was a complete and total beatdown. The Spartans got that 2015 feeling back. Actually, they didn’t even have that feeling in 2015 or any of their other 57 seasons in the B1G.

#MichiganState 49-0 win against Rutgers is their 2nd largest conference shutout since joining #B1G (54-0 over Indiana in 1957). #Spartans

Go figure. MSU hadn’t held a Power Five team to less than 24 points all season. Save your jokes about Rutgers not being a Power Five team. The Scarlet Knights put up an average of 30.5 points the last two weeks.

Everyone is probably wondering where that was all season for MSU. Even though it came against Rutgers, the Spartans wouldn’t have lost seven in a row if it came out with that kind of fire.

So what does that mean moving forward?

Well, MSU has games against a pair of top-10 teams to end the season. On paper, MSU is still a 1-6 B1G team that won’t have any business being on the same field as Ohio State and Penn State. Nobody expects the Spartans to play with those teams.

But perspective is everything in college football. MSU fans remember watching Nebraska celebrate like it won a national title after it pulled off that upset in Lincoln last year. Maybe the Spartans will get the chance to know what that feels like.

The calendar will tell you that MSU is playing for a five-win season — at best — with two weeks to play. No bowl, no conference title, no college football playoff.

No pride? No, MSU still has some of that.