Just another Michigan State-Wisconsin game. Two better-than-average, middle-America teams kicking off at noon on Big Ten Network. Fire up the “these teams both feel like they can compete in the B1G” storylines. Get ready to hear about both of them being top 25 programs nationally. Look around the field and you’ll find as many four-star recruits as you’ll see in a Virginia Tech-North Carolina game. Ho hum.

If you didn’t pay attention during non-conference play, that might be what you expect to hear. Or if you just want to stay entrenched in your lazy narratives, that’s probably how you view this game.

But while you were sleeping, Michigan State and Wisconsin were busy capitalizing on prime non-conference opportunities. Both beat top-25 teams away from their respective homes. Both enter conference play with the proverbial chip on their shoulder. Wisconsin’s chip stems from an awful showing in a win against Georgia State last week while Michigan State’s is from, you know, being Michigan State.

This is anything but your ho-hum B1G opener. It’s No. 11 vs. No. 8. A division title and possibly a shot at the College Football Playoff is up for grabs.

As usual, Mark Dantonio was right. This game is certainly bigger than last week’s showdown at Notre Dame. 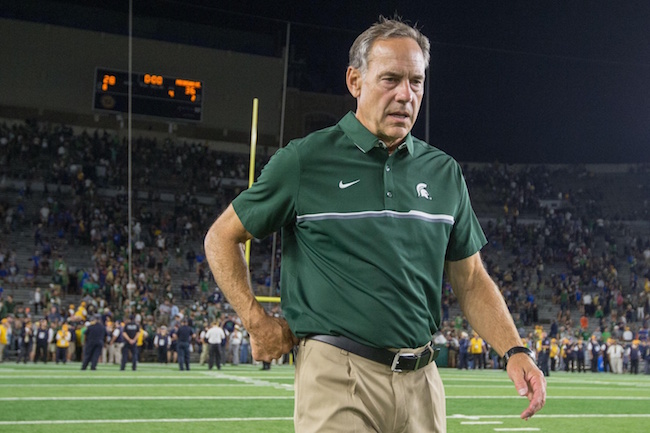 So what if it isn’t some prime-time, high-television audience showdown? If you have any interest in the B1G divisional races, you’ll be up early to watch this one.

This game is worth your undivided attention, regardless of what time or what network it’s on. You could throw this game on ABC at 8 p.m. and it would be plenty worthy.

Just look at what these teams have done against each other since Mark Dantonio took over in East Lansing:

I mean, who could ever forget this?

Will we see another ending like that on Saturday? Probably not. But if we did, it would be even more epic because there’s even more at stake.

Everybody looks at Wisconsin’s schedule and writes it off as a legitimate playoff contender because inevitably, the Badgers have two losses coming in the next month. Here’s a crazy thought. What if Wisconsin gets through this murderous stretch with only one loss? A B1G title berth and a shot at the College Football Playoff is very much alive.

Michigan State showed last week that there’s no rebuilding mode in East Lansing. Much like Ohio State, the Spartans answered those questions with an impressive road showing against one of college football’s traditional powers.

Maybe that’s how these teams should be viewed. After all, Wisconsin is one of nine teams nationally with double-digit wins in five of the last seven seasons. MSU hit the 11-win mark in five of the last six seasons. In that stretch, the Badgers and Spartans accounted for eight of the possible 12 division titles.

Nobody is saying that this is Michigan-Ohio State, but both of these teams seem to be dismissed nationally when it comes to discussing B1G powers. The lack of massive fan bases, preseason All-Americans and five-star recruits compared to traditional powers certainly play a major part in that.

But regardless of pre-game hype, there will be more at stake in this one than any game a B1G team has played all year, including Ohio State’s headliner in Norman last week.

Who cares if this one kicks off at noon on a regional network? Who cares that Wisconsin — if Corey Clement doesn’t play — will take the field without a starter on either side of the ball who came into Madison as a four-star recruit? Who cares that MSU’s highest recruiting class ranking of the Dantonio era is 17th?

There will be plenty of talent, highlight-reel plays and implications on Saturday morning/afternoon. Don’t be fooled by kickoff time slot or recruiting rankings these programs usually earn.

Just look at the national rankings. Those usually tend to do the talking for these two teams anyway.