It can shift one’s perspective dramatically because ultimately, football is a wins and losses business. It isn’t the only thing that determines a quarterback’s value, but it definitely factors heavily into the equation. The last 10 quarterbacks drafted in the first round won at least eight games in their final college seasons. All but two of the first-round quarterbacks since 2010 accomplished that feat.

Quarterbacks that don’t win games on the college level aren’t often touted as blue-chip NFL prospects. The Jay Cutlers and Jake Lockers of the world exist, but they’re few and far between.

Quarterback A was former Michigan State star Connor Cook. As you’ll recall, Cook was in the first-round discussion at this time last year after finishing his career as the Spartans’ winningest quarterback in program history. That was the biggest notch on his belt during the pre-draft evaluation period.

So who was Quarterback B? Raise your hand if you guessed Tyler O’Connor.

Yes, the guy who was under center for arguably the most disappointing season in MSU history compared that closely to Cook.

One quarterback finished ninth in the Heisman Trophy voting. The other got to start nine games.

If an NFL front office brings up MSU’s 2016 free fall to O’Connor — that’s inevitable — he’ll take responsibility for the things that were in his control. MSU struggled on third downs, the passing game often sputtered in the second half and he didn’t make all the plays he needed to dig the Spartans out of holes.

But O’Connor doesn’t want 3-9 to be the only number that NFL teams look at.

After all, he wasn’t responsible for the fact that MSU finished 112th in turnovers forced and 111th in tackles for loss in 2016. Unlike Cook, O’Connor didn’t play on a team that had five players drafted and two All-American offensive linemen. And the one time O’Connor did start with that 2015 group — he filled in for an injured Cook at Ohio State — MSU earned arguably its most important regular season win ever.

O’Connor’s goal isn’t to deflect blame or say that he accomplished as much as Cook did. It’s to make sure the NFL gives him a fair look, and not one with a 3-9 filter. 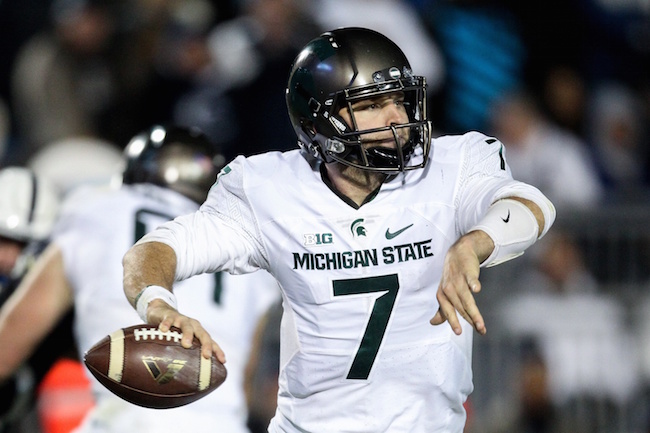 O’Connor isn’t afraid to speak candidly about his numbers compared to Cook’s. And in a recent conversation with Saturday Tradition, he made sure to note that he wasn’t lessening Cook’s MSU career accomplishments by doing so. They were road roommates for four years at MSU and they still talk several times a week.

Cook, who dealt with a different kind of scrutiny, helped O’Connor throughout the pre-draft process. Avoiding social media helped. O’Connor said he doesn’t read about himself, but that he’s aware of the knock on him heading into the draft.

The lack of live action won’t help O’Connor in the pre-draft process, but like MSU’s 2016 record, he doesn’t believe that should be a deal-breaker. O’Connor pointed out the fact that Matt Cassel completed 20 of 33 passes for zero touchdowns in his college career at USC and he was still drafted. Last week, the 12-year veteran quarterback signed a two-year contract with the Tennessee Titans.

RELATED: Seven B1G prospects that helped themselves at the combine

Like Cassel, O’Connor spent most of his college career as a backup. Not getting the starting job until his fifth season in East Lansing made for limited film on him, but it did have a major benefit.

O’Connor spent five years in the same pro-style system. How rare is that? None of the top projected five quarterbacks in the draft — DeShone Kizer, Patrick Mahomes, Mitchell Trubisky, Deshaun Watson and Davis Webb — played in a pro-style system in 2016.

The fact that O’Connor played with the same co-offensive coordinators his final four seasons — a rarity in today’s age of college football — helped, too.

That doesn’t mean O’Connor is viewed in a higher regard than any of the top quarterback prospects. But he believes that advantage makes him a “safe pick” at the end of the draft.

“I’ll put my knowledge of football compared to anyone in this draft class,” O’Connor said, “and I would bet on myself.” 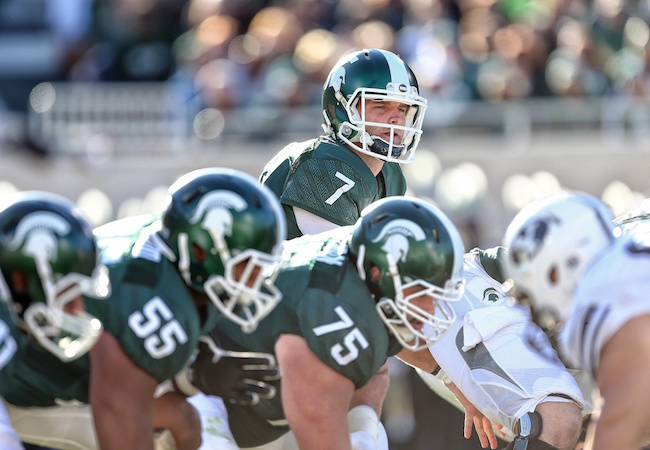 O’Connor credited the MSU system for giving him the foundation he needs to make the transition to the next level. He got a different type of coaching to help him prepare for his pro day.

The last couple months, O’Connor trained in Scottsdale, Ariz. with quarterbacks coach Jeff Christensen, who runs Throw It Deep. Kirk Cousins (a former Spartan), Jimmy Garoppolo and Cardale Jones were just a few of the notable clients that Christensen worked with.

While O’Connor was there, he worked out with NFL quarterbacks like Drew Stanton (another former Spartan), Tom Savage, Brock Osweiler and E.J. Manuel. Surrounded by NFL veterans, O’Connor felt like he held his own.

“To be honest, it’s very rewarding and confidence-building because I see what they do and I see what I do and I’m right there with them,” he said. “The opportunity to be with guys like that is something that I’ll never forget regardless of how this all turns out.”

Since he began training with Christensen, O’Connor said his footwork has improved significantly and his release is quicker. The lower-body changes also resulted in him being “much more” accurate.

Busting out the dance moves while training @TylerOConnor7. Incredibly talented QB. He has what it takes to play in the NFL. #ThrowItDeep pic.twitter.com/8G1QaE64YK

#MSU QB @TylerOConnor7 training with @J_ChristensenQB & @QBCoachPreston in hopes of making it to the #NFL next season. #TID #Football #QB pic.twitter.com/qoOuOJ2hGq

O’Connor understands that regardless of how much he improves before his pro day, other quarterback prospects will attract more attention. He estimated that at least 12 quarterbacks — 15 were invited to the combine and he wasn’t one of them — are slotted ahead of him right now.

The experience O’Connor had in Scottsdale led him to a different conclusion.

“I’ve thrown with some of those guys that are in front of me and I know that I’m better than them. I know that I throw the ball better than them,” he said. “I was with a top-five quarterback out in Scottsdale — I won’t say his name — and it wasn’t even close throwing the ball. I’m not saying that to be cocky or anything, but I’m just very confident in what I do and I’m very confident in what I’ve been taught and in my ability.

“I know that I can play in this league. If this guy that I was with is a top-five rated quarterback right now, then I deserve to be, as well.” 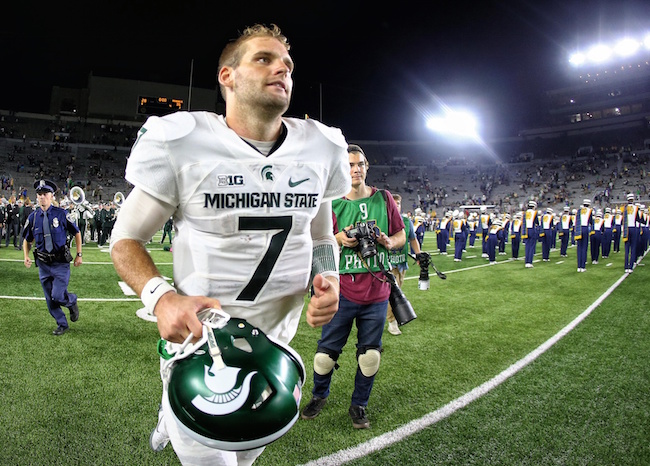 O’Connor just relocated his training from Scottsdale to Chicago. He still works with Christensen and will continue to do so until MSU’s pro day on March 22.

The daily routine is pretty simple.

“I work out three times a day, eat healthy and watch a lot of Netflix,” O’Connor said.

O’Connor’s TV subscriptions are up, but his weight is down. After he ended the season in the 228-230-pound range, the former MSU quarterback hoped to weigh in at 220-222 pounds at his pro day. By virtue of three workouts per day and a lower daily caloric intake, O’Connor dropped down to 219 pounds without checking the scale for two months.

RELATED: Five B1G prospects that didn’t help themselves at the combine

Physically and mentally, O’Connor feels like he’s in the best shape possible ahead of his all-important pro day.

“When I get my chance at our pro day, I’m just gonna show that I’m with the guys that they saw at the combine,” he said, “and maybe they should’ve invited me to it and given me that opportunity.”

O’Connor can’t go back in time and work out at the combine, nor can he undo 3-9. He wouldn’t mind if NFL teams focused on how he performed in road victories at Notre Dame and Ohio State, but that’s out of his control, too.

Through all the ups and downs of his atypical career, O’Connor said that it taught him how to be steady. He learned never to get too high or too low, no matter what the situation is.

But he’d still welcome the high of his life at the end of April.