For whatever reason, I convinced myself that Michigan State wouldn’t name a starter at quarterback until AFTER the Notre Dame game on Sept. 17. I thought that Mark Dantonio would continue to say that Tyler O’Connor was leading the race but that Damion Terry would still be heavily involved. The B1G’s most high-profile quarterback battle would be just that for the next month.

I should’ve known better. Dantonio doesn’t do business like that. He never has and never will.

That’s fantastic news for Michigan State. All reports have been positive surrounding O’Connor, and Dantonio’s announcement solidified that.

Even though he’s a fifth-year senior, this is all new for O’Connor. There’s still going to be a learning curve for the new QB1. Things aren’t going to come as easily for him as they did for Connor Cook. The comparisons will be there — both Ohio natives who were overlooked by you-know-who — but the expectations are obviously different.

O’Connor’s situation as a one-year starter resembles Jake Rudock’s situation more than Cook’s. Fortunately for O’Connor, he’s had four years to learn the offense, and based on Dantonio’s confidence in him, it shows. 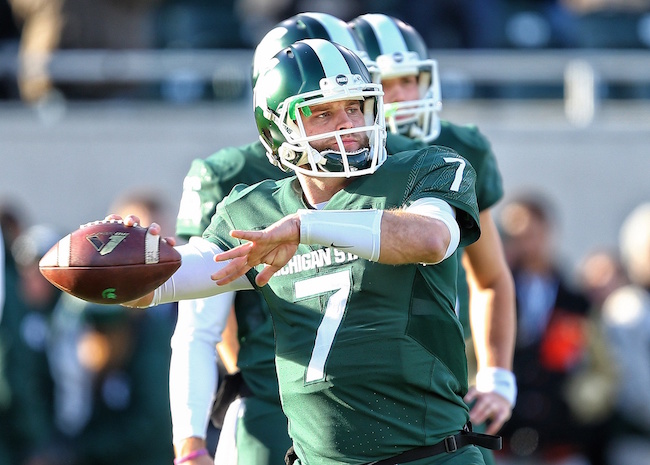 Dantonio still could use Terry in situations, just as he did last year against Ohio State. But as Dantonio saw from Ohio State last year, a wishy-washy quarterback battle that carries into the season can be a headache.

And if there wasn’t an even battle, why continue to present it as a competition? Michigan State players knew who the best quarterback on the team was. By giving O’Connor the nod earlier than expected, Dantonio gave him the confidence he needs to own that role.

Playing quarterback at MSU has become a position worthy of national attention. That’s the standard that Cook and Kirk Cousins created. MSU was slotted as a preseason top-15 team because there’s an expectation that the quarterback position, while uncertain, will be taken care of. O’Connor is now in that spotlight, but it’s one that Dantonio feels he’s ready for.

The question is no longer whether or not MSU has its offensive leader. No matter how much MSU runs the ball this year — expect it to be a lot — it has its guy.

Only time will tell if O’Connor can lead MSU through a challenging schedule the way Cook did. The Spartans still only have one game until Sept. 17, and it’s at home vs. Furman. We won’t know then how good O’Connor is. We might not even know on Sept. 17 against Notre Dame.

But now, MSU has a direction. And if we’ve learned anything about Dantonio’s Spartans, the destination usually exceeds expectations.