Mark Dantonio said on Tuesday that Michigan State’s starting quarterback is to be determined. Whether or not he’ll actually announce that before Saturday’s game against Northwestern is anyone’s guess.

It’s a hot topic of conversation in East Lansing with the team in the midst of a rare three-game losing streak, and a lot of the blame is centered around poor quarterback play. In Saturday’s loss to BYU, Tyler O’Connor struggled for the third straight game, and Damion Terry wasn’t much better in relief.

Dantonio actually listed three quarterbacks as possible starters this week, none of which will be available to speak to the media. The MSU coach stressed that the team’s only focus is on beating Northwestern.

If he wants to make that happen, it might not be a bad idea to give Terry full reins of the offense. 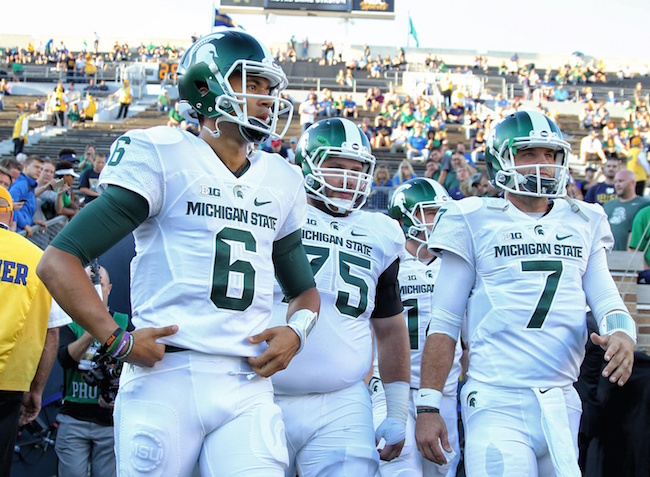 That’s not some “grass is always greener” hot take. Frankly, there’s no quick fix for the obvious struggles of the MSU offense. It won’t change the fact that MSU still lacks a possession receiver and the offensive line isn’t nearly as good as it was last year.

But Terry’s mobility could, at the very least, present some problems for Northwestern.

The Wildcats will have had two weeks to prepare for MSU, likely assuming that O’Connor will be under center. If Northwestern had a say, O’Connor would start. His mobility is average at best, while Terry is a true dual-threat quarterback.

Mobile quarterbacks have been problematic for the Northwestern defense. In three of their four games vs. FBS teams this year, the Wildcats allowed a quarterback to run for at least 40 yards. The only time they didn’t was against C.J. Beathard, who has become a pocket passer.

The Wildcats haven’t exactly been stout containing mobile quarterbacks dating back to the start of 2015:

Armstrong’s 132 yards a few weeks ago were a career high. Sure, Northwestern responded well against Beathard the following week, but Terry is a lot closer to Armstrong than he is to Beathard right now. And right now, O’Connor looks an awful lot like a struggling Beathard.

Two weeks ago, Beathard was sacked six times against Northwestern. What are the odds that a fresh Northwestern defense comes into East Lansing and does the exact same thing to O’Connor? Given how poorly the Spartans have protected and how much O’Connor has struggled with pocket awareness, it’s pretty likely.

RELATED: Whatever chip Michigan State once had is gone

So why not give Terry a shot? At the very least, he can make something happen on broken third downs. There have been a lot of those with O’Connor under center. As a result, the Spartans have been disastrous on third downs.

After the first quarter in the last three games, the Spartans converted just 25 percent of of their third down opportunities. As referenced in the B1G Power Rankings, only one FBS team has a worse season-long conversion rate than that.

Here’s an example of a play that Terry can make that O’Connor can’t. Instead of taking a coverage sack, Terry uses his legs and converts:

Heading into 2016, O’Connor appeared to fit the build of MSU quarterback better than Terry did. Put them in a controlled environment, and O’Connor probably looks like the better option.

But MSU needs someone that can improvise, sustain a drive and get some sort of rhythm going. That isn’t O’Connor.

It doesn’t matter if Terry isn’t quite the passer that O’Connor is. As we’ve seen from quarterbacks like Trace McSorley, J.T. Barrett and Tommy Armstrong, you don’t have to be the world’s most accurate passer to be a successful dual-threat quarterback. Those three quarterbacks are all in the top five in the B1G in yards per game. Not surprisingly, their teams are a combined 14-2.

Nobody is saying that Terry will enter the lineup and become one the B1G’s best offensive weapons. But MSU is in free fall right now, and as Dantonio said, getting more production out of the quarterback position will help turn that around.

Everybody keeps debating whether or not Dantonio should punt on 2016 and play for the future by starting Terry.

Who’s to say Terry doesn’t present MSU with the best chance to beat Northwestern on Saturday?