Where team was when he was hired — A bit stunned. Nobody thought that Jerry Kill’s health would allow him to coach into his 70s, but they certainly didn’t predict a midseason decision to resign, either. After all, Kill was the reigning B1G Coach of the Year. Rough start to 2015 aside, he had Minnesota a game away from playing for the B1G Championship in 2014.

On top of that, Kill stepped down in the middle of Michigan week. The Gophers were set to host the much-hyped Wolverines in a primetime game in Minneapolis.

There was no settling in or shuffling of the deck for Claeys. He was tasked with taking a 4-3 team — that most recently suffered a brutal home loss to Nebraska — and righting the ship for three straight matchups against top-15 teams. No, the Gophers didn’t win any of those games. But they were within a touchdown late in the fourth quarter in all of them.

Minnesota could’ve mailed it in like a few other teams did when they lost their coach, and given their injury situation, it could’ve gotten ugly. The fact that they didn’t was a credit to Claeys.

If you’re going to face a MAC team in a bowl, you’d better win. Claeys got his team ready to play in a Monday night bowl game in Detroit against a MAC team. That’s easier said than done.

Against a solid quarterback, Minnesota held CMU’s passing attack in check all night. And the Gophers’ highly criticized quarterback, Mitch Leidner, delivered one of his better performances as a starter.

It might not have been the prettiest game, but Minnesota didn’t exactly take the prettiest route to earn a bowl berth. Most five-win teams don’t get the offseason boost of an extra month of practice. On top of that, Claeys got to put his stamp on something better than a home win against Illinois. Ending Minnesota’s 11-year bowl victory drought was a nice feather in Claeys’ cap. 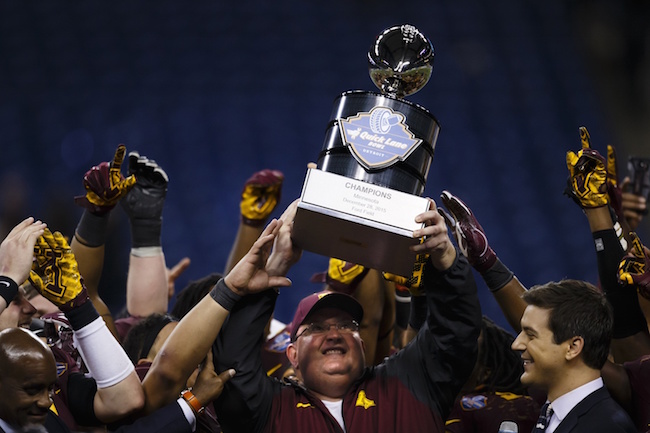 Losing to a 10-win team like Wisconsin is by no means “embarrassing.” But compared to losses vs. Michigan, at Ohio State and at Iowa, it wins by default.

Minnesota had a prime opportunity to end Wisconsin’s 11-year winning streak in the battle for Paul Bunyan’s Axe. The Badgers were coming off a gut-wrenching home loss to Northwestern and their postseason fate was already sealed. It was a chance for the Gophers to finally get one back on their home turf after Wisconsin spoiled their B1G West hopes a year earlier.

But Minnesota kept shooting itself in the foot. The Gophers turned the ball over five times and without Corey Clement, the Badgers still dominated on the ground. It was easily the worst game Minnesota played after Claeys took over, and against its biggest rival no less.

Claeys got an outpouring of support from recruits when it was announced that he was taking over for Kill. That was key. Also key was the fact that Minnesota’s golden recruit — four-star linebacker Carter Coughlin — stayed on board. The U.S. Army All-American could’ve easily flipped to Ohio State or Oregon. Instead, he kept his commitment, which helped keep that group in place.

Claeys couldn’t keep everyone, but his relationships prevented Minnesota from taking a significant step back in the recruiting department. 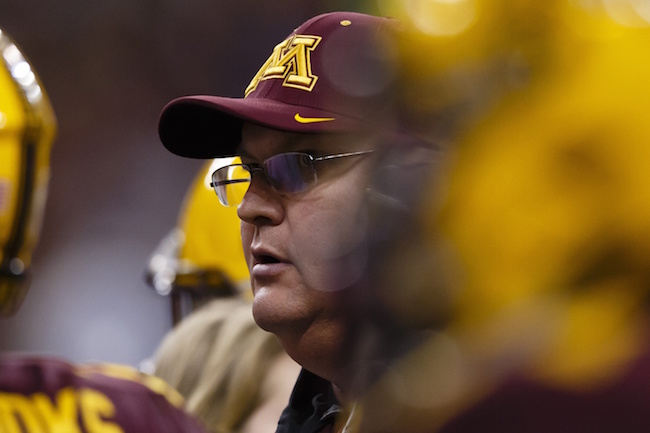 What could get him fired — This is a little bit trickier than some people might realize. On one hand, Claeys is a confident, well-liked guy who prevented Minnesota from completely going under after Kill resigned. You won’t find a bad thing said about him right now because frankly, the sample size is too small. He appears to have the support of the administration, which is obviously a major factor in deciding a coach’s future.

But Minnesota athletic director Mark Coyle was just hired this offseason. He has no allegiance to Claeys or anyone from Kill’s original staff, much of which is still in place. Coyle’s job will obviously depend largely on the success of the football program. We don’t know what kind of expectations Coyle has for the team in 2016.

We do know that Coyle spent one year at Syracuse, where he fired football coach Scott Shafer before the regular season finale because of a four-win season. We also know that Coyle has a five-year deal and that Claeys has a minimal buy-out on his three-year deal.

Claeys knows that he was to win in his first full season as a coach. Repeating a five-win season might not give a new AD much confidence. Josh Whitman’s firing of Bill Cubit at Illinois reminded everyone that short-term contracts — cheap ones, especially — make it easier to justify a firing.

How can Claeys make sure that he’s safe? Reaching the 8-10 wins that he talked about would do the trick.

Why he’s at No. 10 — Don’t underestimate how difficult it is to take over a program midseason. Claeys gets a lot of credit for doing that. Minnesota actually improved a lot in the second half. Because of that, he’s ahead of every first-year B1G coach or Darrell Hazell, whose teams have continually struggled against the B1G.

If we were doing this a year ago, one could’ve made a legitimate argument to put Kill at No. 4 behind only Mark Dantonio, Jim Harbaugh and Urban Meyer. But this is Claeys’ team now, and there are still questions about how he’ll do in all facets of being a head coach.

Can he land a top-30 recruiting class? Can he make the right calls in the fourth quarter of a game? Can he establish a culture of winning in a locker room that’s still filled with guys who planned on playing for Kill?

We’ll find out in 2016. If he does those things successfully, Claeys will still be on this list in 2017.