Jerry Kill was in a staff meeting breaking down a game plan for his team’s upcoming matchup with Ohio University. The then-Minnesota coach made a bold prediction to everybody in the room.

“Shannon Brooks will have a big game. I promise you guys.”

On the surface, it was normal for a coach to predict a running back matched up well with an opponent. With the frequency Kill’s teams ran the ball, he knew what to look for.

He was a true freshman without a single carry.

Brooks only made his collegiate debut two weeks earlier on the kickoff return team because K.J. Maye and Antonio Johnson were dehydrated playing in the altitude at Colorado State. In the second half, Brooks was supposed to get his first carry, but a miscommunication with Mitch Leidner on a zone read led to a fumble and cost him that chance.

Still, Kill was ready to give him another shot. Even better, he was convinced that the guy who only got two Power Five offers was ready to go off.

Brooks made his coach look like the smartest guy north of Georgia.

Not only did the freshman tailback bust loose on a 40-yard scamper for his first career touchdown, he ran in the go-ahead score with 30 seconds left to give Minnesota a nail-biter victory.

Just as Kill drew it up.

“It was like, ‘Wow. Coach, you called it,’” Minnesota receivers coach Brian Anderson said. “The rest is history.”

Brooks finished his first year in Minneapolis with 709 rushing yards — the fourth-most ever for a Minnesota freshman — and seven touchdowns. He ran for as many yards per carry as Heisman Trophy runner-up Christian McCaffrey and finished with four touchdown runs longer than 35 yards. On three separate occasions, Brooks earned B1G Freshman of the Week honors.

His immediate rise didn’t make him a household name like freshman sensation Saquon Barkley, but Brooks made believers out of plenty of people in that Ohio game, including himself.

“That really told myself that I can do it,” Brooks said. “It motivated me and gave me a lot of confidence.”

Brooks enters his sophomore season with no shortage of expectations — expectations few thought he could reach. 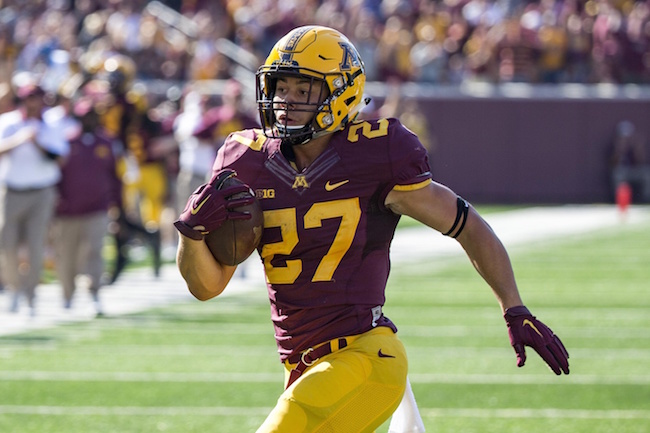 That’s how it reads on Brooks’ official bio page. But make no mistake about it, Brooks definitely did not play his high school football in one of the largest metropolitans in the country.

Anderson remembers flying into Atlanta and making the hour-and-45-minute drive north. Through winding roads and mountains he drove to get his first in-person look at the unknown tailback. Anderson hadn’t even heard of Brooks until a Minnesota grad assistant made him watch his video. Brooks didn’t make the regular trips to satellite camps or showcases where Anderson could’ve seen him and given him the conventional first-hand evaluation.

When Anderson arrived, he was greeted by Brooks at the door. He quickly realized he was glad he made the trip.

“Dude,” Anderson said. “He’s a good-lookin’ cat. I fell in love with him right away.”

It was a different first impression than the one SEC coaches got when they looked at Brooks. They saw a back who was 5-11, 195 pounds at best. Never mind the fact that Brooks had over 2,000 yards from scrimmage and 20 touchdowns as a junior. They didn’t show interest when Brooks finished his high school career with 5,797 yards and 68 touchdowns in just 36 games, either.

Despite being in the heart of SEC country, he didn’t get a single offer from an SEC school.

“They look at different kind of backs,” Brooks said. “I probably didn’t pass the ‘look test’ that they wanted.”

Nick Chubb, another Georgia tailback in Brooks’ region, passed everyone’s look test. A five-star recruit, Chubb had his choice of any school in the country. Like most of the state’s top players, he picked the University of Georgia and became a Freshman All-American.

But before he did that, he faced off with Brooks in a battle for the ages. When Brooks was a sophomore at Pickens High School, he and Chubb combined for over 600 yards from scrimmage. Chubb racked up over 300 yards compared to Brooks’ 100-plus yards rushing. But Brooks also had over 200 yards receiving — a school record — and led his team to a victory.

Twice he upstaged Chubb. And while Chubb had slightly better career production, it wasn’t heads and shoulders above Brooks like their offer lists would’ve suggested.

“I’m sitting there going, if Nick Chubb is playing in the same region, how come he’s not getting recruited at all?” Anderson said.

Anderson did his due diligence on Brooks. He talked to coaches and teachers, all of whom praised his mindset and work ethic. Outside of Georgia Tech, no other Power Five school recruited Brooks as a senior.

Whatever it was, Anderson saw through it. After they got Brooks up to Minneapolis for a visit, he was set on becoming a Gopher. It didn’t take any teeth-pulling once Brooks got the Power Five attention he felt he deserved.

“You’ve got to drive off the beaten path sometimes to find players like that,” Anderson said. 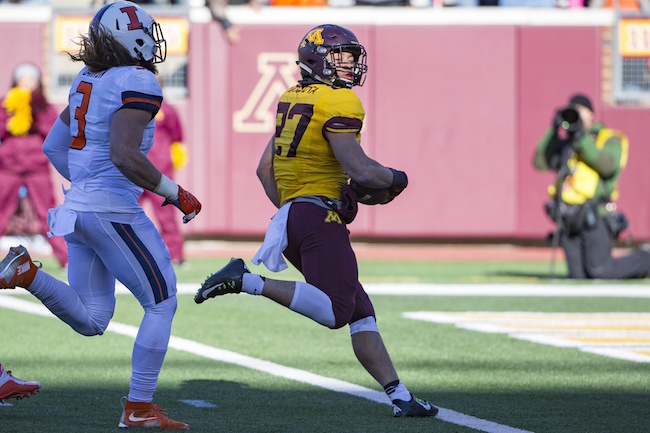 Anderson did that back in 2011, too. He made the trip to Mobile, Ala. to see a 5-10 kid play basketball. The recruit lived in the heart of SEC country but he didn’t have any Power Five offers. Louisiana Tech, South Alabama and Northern Illinois were the only schools that showed interest in him after he missed all but one game of his junior football season with an ankle injury.

But after Anderson did his homework and watched him run the point on his high school basketball team, Minnesota offered him a scholarship.

That player was K.J. Maye.

A three-star running back out of Texas was recruited by Power Five schools, but nobody wanted him to at running back. Instead of playing defense, he decided that he wanted to play running back and got back in touch with a school that recruited him early. He became a part of Kill’s first recruiting class at Minnesota.

That player was David Cobb.

A 5-9 cornerback from Coffeyville (Kan.) Community College caught Minnesota’s eye after he earned second-team all-conference honors as a true freshman. When he was in high school in Delaware, he was more heralded on the basketball floor than on the football field. Still, the Gophers staff liked the potential they saw in the two-star recruit.

That player was Briean Boddy-Calhoun.

None of those players were four-star recruits, yet all of them ended their careers with All-B1G honors. All of them could have NFL careers in front of them because Minnesota went off the beaten path. 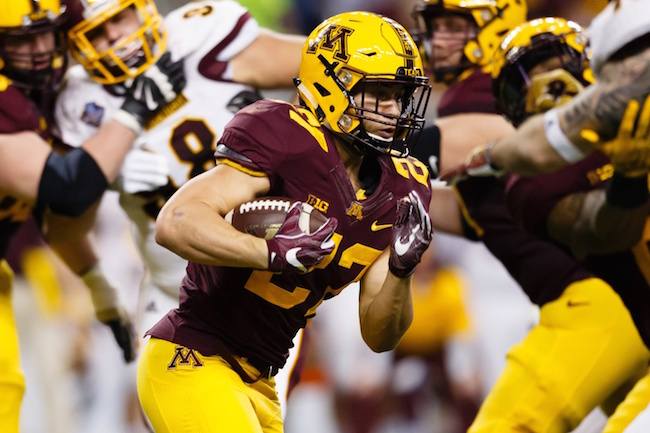 No gloves, no tape, no elbow pads.

All Brooks wore on his first day of practice at Minnesota was the required gear. Just like he did when he met Anderson at his front door in Georgia, Brooks made a lasting impression.

“He came out in just whatever we wore that day, and got it on.”

Brooks’ gear — or lack thereof — reflected his personality. No frills, no flash, no hype. Not surprisingly, Brooks isn’t big on projecting potential.

“I don’t really believe in the star system,” he said. “I don’t really look at that. I just go out there and and work to try and get better every day.”

That’s exactly what Brooks did throughout 2015. After he got his first official carry against Ohio, he averaged 88 yards from scrimmage on less than 14 touches per game. The two times he hit 17 carries in a game, he rushed for 170-plus yards.

As the season progressed, the Gopher coaching staff tried to find creative ways to get the emerging freshman the ball. They put him in on kick returns. They subbed him in for Maye and ran jet sweeps. They even drew up a halfback pass against Iowa, which Brooks tossed to Drew Wolitarsky for a 42-yard touchdown.

Still, the coaching staff didn’t feel like Brooks got a full workload. That could change in 2016.

“It’s a priority,” Anderson said. “We need to get Shannon at least 20-plus touches a game. Maybe kickoff returns, maybe the screen game. Obviously he’s going get his touches in the backfield with Rodney (Smith) and on jet sweeps. We’re going to maximize his ability to be a big-play guy for us.”

RELATED: ‘Holder of the Year’ Peter Mortell doing everything and more to fulfill NFL dream

Smith was and is the biggest threat to Brooks’ workload. Fittingly, he was also a lightly recruited back from Georgia with only one other Power Five offer from Georgia Tech. A year apart in school — but the same in eligibility — both have aspirations of forming a Marion Barber-Laurence Maroney-like duo for years to come in Minneapolis.

“If we didn’t have Rodney Smith, I could for sure see (Brooks) being a David Cobb-type tailback,” Anderson said. “We’re fortunate enough to have two of them and maybe use them in different variations and looking to get the ball in their hands.”

It was Cobb’s workload in 2014 that drew Brooks to Minnesota. He finished that season with a whopping 314 carries, which was good for third in the nation. His carries and yards (1,626) were both single-season records at Minnesota. Brooks called it “a dream” to play in a system that featured tailbacks like Minnesota did.

Even though Kill and his ground-and-pound system are gone, Brooks still has high aspirations in Tracy Claeys’ offense. Brooks graded his breakout freshman season a ‘C.’ An ‘A’ sophomore season would be 1,200-1,500 yards and 12-15 touchdowns. Winning a B1G rushing title is also within his sights. Anderson can envision Brooks developing into a first-team All-B1G back.

That would make Anderson look like the smartest guy north of Georgia.