It’s been one year since Jerry Kill’s sudden retirement. Last October, Kill’s mid-season announcement stunned the college football world. He delivered a moving, passionate speech about how difficult it was to step down.

At the end of that speech, he lobbied for Tracy Claeys to become the team’s full-time coach. Claeys was Kill’s guy all the way back at Saginaw Valley State University in the mid-1990s.

Kill’s wish was granted when interim athletic Beth Goetz signed Tracy Claeys to a three-year deal — without an agent present — that would keep him in Minneapolis through the 2018 season. It was the obvious move. It allowed Minnesota to keep Kill’s longtime staff together and provide stability.

But the three-year deal Claeys signed didn’t scream “long-term stability.” Three years in today’s college football world is miniscule. It’s easy for an opposing coach to use a contract like that as “negative recruiting.”

The Gophers gave Claeys the keys to the car, but they didn’t sign over the title. Claeys’ contract was short in length because Minnesota knew it had a new athletic director coming in. That’s who will determine Claeys’ future.

And regardless of the fact that Claeys’ contract runs through 2018, the final five games could determine if he’s around for two more years. 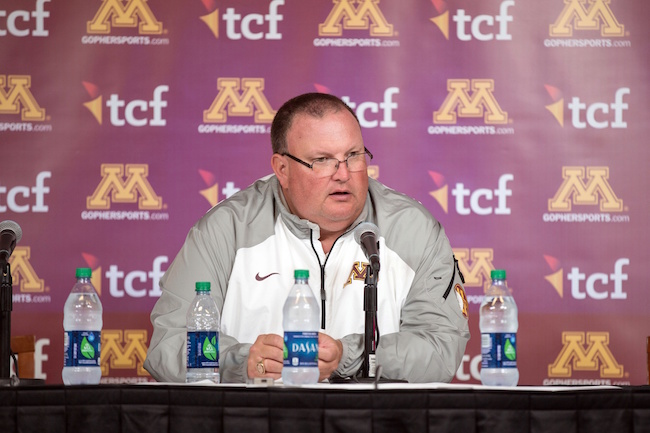 “The hot seat” is often associated with a coach that hasn’t lived up to expectations and is in jeopardy of getting fired. Claeys’ situation is different, but it could involve similar win-now pressure.

When Mark Coyle was brought to Minnesota from Syracuse, he didn’t have to make an immediate decision about Claeys’ future. It was slightly different than what Illinois had with new athletic director Josh Whitman, who fired recently-hired Bill Cubit months after taking over.

Ok, just because it’s cheap to fire someone doesn’t mean that’s the best move. That’s correct. Coyle isn’t going to look at Claeys’ buyout and bring in a new guy just to bring in a new guy. But if Claeys struggles down the stretch— or plays like it did against Rutgers — it would certainly add more incentive to that argument.

Minnesota will be favored to win the next two games and get to 7-2. Going into that Nebraska game at 7-2 would be huge for Claeys.

The realistic goal still has to be eight regular season wins. That was the number Claeys threw out in the beginning of the season. He was confident his team could win between 8-10 games. With that favorable schedule — Iowa was the only preseason top 25 team — the Gophers were in prime position to do just that.

For that reason, people like Kirk Herbstreit picked the Gophers to win the B1G West. Nebraska and Wisconsin both greatly exceeded expectations, so it wouldn’t necessarily be a massive letdown if the Gophers didn’t get to Indianapolis.

Getting to eight wins would mark the first time in program history that the Gophers reached that total in three of four seasons. That’s something Claeys could stamp his name on and convince his new boss that he’s the right guy for the future. 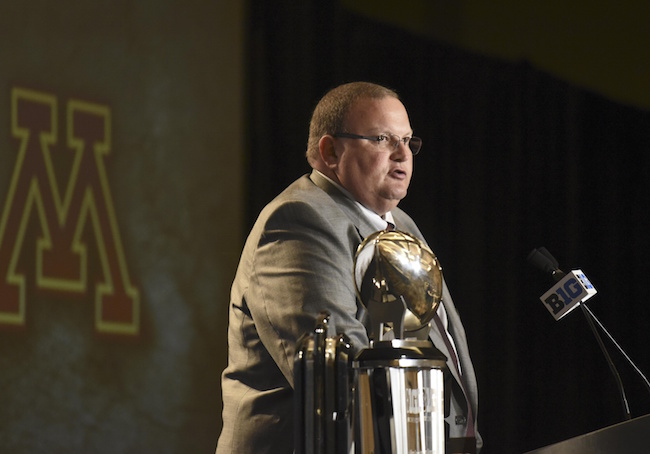 But what happens if Minnesota finishes the season with six or seven wins with a loss to Illinois or Purdue? Claeys would be at 8-9 or 9-9 with a 6-9 mark against Power Five teams. Unless Minnesota pulled off a big upset at Nebraska or at Wisconsin, Claeys would be 0-5 against ranked teams since he took over.

The sample size is small, but because of the timing of Coyle’s hire, he’s only going to get a small sample size to decide if Claeys is the guy or not.

Will Coyle make that decision after 2016? We don’t know. We do know that in his only year at Syracuse, Coyle fired Scott Shafer after a four-win season (right before leaving for Minnesota). We also know that the Gophers are in the midst of a massive facilities upgrade that it would like to capitalize on.

Coyle doesn’t owe anyone the benefit of the doubt, even if Claeys is by all accounts someone who does things the right way. They’ve only known each other for a few months. They actually met by grabbing some ice cream together at the local Dairy Queen.

Still, the chances of Coyle going to bat for Claeys like Kill did are slim to none. Coyle doesn’t want his performance to be evaluated on someone else’s decisions. One of the smart things the Gophers did for Coyle was structure Claeys’ deal to make it easy to get out of, or easy to extend.

That decision is coming, and it’s coming sooner than many realize.