What expectations should really be in P.J. Fleck's first year at Minnesota

Ok, I apologize for using P.J. Fleck’s word. I promise that’ll be the last time it’s used in this story.

But beyond a gimmicky word, what is it that Minnesota can become in its first year under Fleck? Is this a team that can legitimately threaten to win a B1G title? Or are the Gophers due for a little bit of a drop-off in Year I of the Fleck era?

Sitting here in the second week of March, we don’t know the answer to that question. But we do have some perspective, both about what kind of program he inherited and what kind of a coach he is.

Let’s not forget that just four years ago, Fleck was the inexperienced hire who looked in over his head after a 1-11 first season at Western Michigan. Now, he’s in a different situation. He inherited a nine-win team with some pieces to build on.

So what should expectations look like? I broke that down into a few categories. 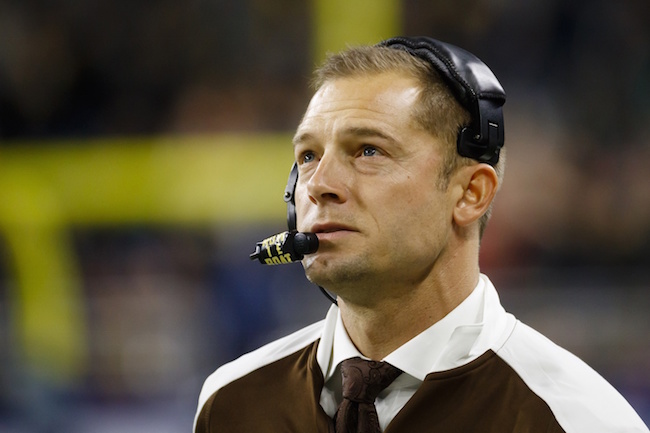 We don’t have any idea who will be Minnesota’s quarterback on opening day 2017, but many feel that anyone is an upgrade compared to Mitch Leidner. You can debate the merits of that argument all you want, but the reality is, Minnesota must improve in the passing game.

Last year, Minnesota was 111th nationally in total passing and only two programs threw for fewer passing scores than the Gophers did. Woof.

Fortunately, Fleck and Kirk Ciarrocca know a thing or two about building up a passing game. Only 11 teams passed for more touchdowns than their Western Michigan offense did in 2016. Obviously it helps when you have a first-round talent like Corey Davis. Minnesota doesn’t have anyone that good on the outside, but keep in mind that Davis was a two-star recruit who became the most productive receiver in FBS history.

Fleck knows how to maximize talent, and even with a new face at the quarterback position, he should still be able to do the same in Year 1. At the very least, the Gophers should have an average passing attack in 2017.

Lost in the shuffle of Fleck’s passing game prowess is his history of utilizing a two-back system. In three of Fleck’s four seasons in Kalamazoo, at least two backs got 150 carries. Only one of them failed to average at least 4.5 yards per carry.

In other words, don’t expect him to try and shake up one of the better backfield duos in the country.

Rodney Smith’s breakout season was a saving grace for how truly awful Minnesota’s passing game was. Add in a full season of a healthy Shannon Brooks and it’s not crazy to suggest the Marion Barber/Laurence Maroney comparison. That’s how good they are and how well they compliment each other.

Expect Fleck and Ciarrocca to look for more ways to get them involved in the passing game. They’re clearly Minnesota’s top two offensive weapons.

If you’ve ever wondered why there hasn’t been any national preseason hype about Minnesota, consider this. Since the start of the decade, the Gophers have had ONE recruiting class ranked in the top 50 (247sports). That’s it. Jerry Kill’s regime had a knack for discovering guys like Brooks, Briean Boddy-Calhoun and KJ Maye and turning them into studs. That’s a hard model to sustain.

Fleck’s biggest overnight difference should be in recruiting. We already saw him salvage the 2017 class, which was in flux when Tracy Claeys was let go. With a full recruiting cycle, Fleck is going to recruit at a historic rate for Minnesota.

In 2018, Fleck already has commitments from the top Minnesota recruit, the No. 8 Illinois recruit and a top 25 dual-threat quarterback recruit. He’s going to bring a different kind of recruiting presence in the Midwest that should make the Gophers significantly more talented from the jump.

And remember that beautiful new facility Minnesota is building up? It’s scheduled to be ready by January of next year. That’s going to make an immediate impact on Fleck’s ability to get kids to the Twin Cities.

Don’t be surprised if Fleck pulls in a top 35 recruiting class and makes a serious push toward the front half of the conference rankings.

So, how many wins?

That’s a tricky question at this stage of the game because I hate to run through schedules and predict games in March. Having said that, Minnesota returns 14 starters. Penn State is the only B1G team that returns more starters on the offensive side of the ball.

According to Phil Steele, the Gophers have the B1G’s second-least brutal schedule. So with that in mind, shouldn’t one expect a win increase in 2017?

Not necessarily. In fact, I set the expectations bar at seven regular season wins. I think Minnesota’s schedule is more difficult than Steele suggested and I still question how the defense will improve losing a coordinator like Jay Sawvel.

If this team wins eight regular season games, Fleck will have Minnesota’s boat rowing in the right direction.