The Gophers got a gift that they needed. Badly. The boycott fallout was still fresh. A no-win situation put a black eye not only on Minnesota football, but on the entire university. Despite the boycott, the 10 suspended Minnesota players were still out for the Holiday Bowl. Minnesota traveled with eight healthy defensive backs.

Late in the third quarter, everything was typical Minnesota. The Gophers were hanging around against a solid team, and getting zero help from the passing game. All signs pointed to a hard-fought Minnesota loss.

That looked even more evident when during Minnesota’s best drive of the day, Mitch Leidner lofted an ugly pass into several Washington State players. An interception would’ve given the Cougars the ball back up four points, which felt like 20 points the way Minnesota’s offense was moving.

Plays like this are why Mitch Leidner is a top-10 pick, amiright? pic.twitter.com/8X0TVf0chf

That was the game-winning touchdown for the Gophers in Tuesday night’s victory. But don’t let that fortunate bounce fool you. It took a whole lot more than luck to win the Holiday Bowl.

Remember the great offensive guru, Mike Leach? His offense couldn’t figure anything out against a Minnesota defense that was hanging by a thread. Wazzu averaged 40 points per game in Pac-12 play. Entering Tuesday night, the Cougars had the No. 2 passing offense in FBS.

This group was supposed to SHRED the Gophers. Vegas thought so. That’s why Minnesota was a 10-point underdog. How could Washington State not light up a middle-of-the-pack B1G team coming off an ugly national scandal?

If you watched on Tuesday night, you saw what many others did. Minnesota wanted that game more. Don’t tell the Gophers that was a meaningless bowl game. 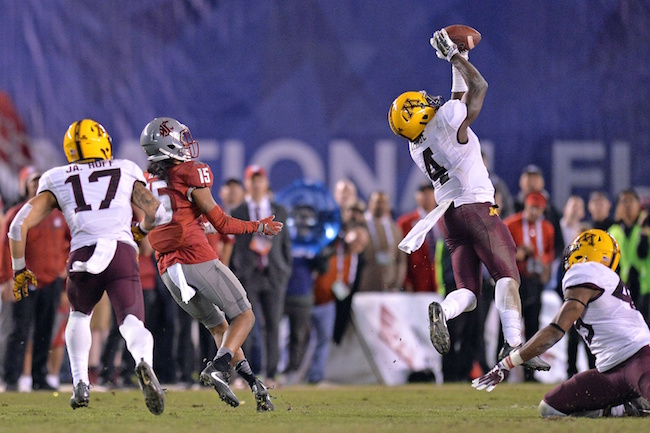 Jalen Myrick didn’t look like he was checked out when he was draping Wazzu receivers. Blake Cashman didn’t look timid when he chased down Cougar ballcarriers in the backfield. Shannon Brooks didn’t look like he thought the season was over when he carried the Cougar defense for a critical first-down run late in the fourth quarter.

Many expected Minnesota to be focused on anything but football. After all, the Gophers missed two whole practices leading up to the Holiday Bowl. And with increased uncertainty about Tracy Claeys’ future, how could 18-22 year-old-kids shift back to football and pick up their most-impressive win in two years?

That was actually Minnesota’s first win vs. a ranked team since beating Nebraska in Nov. 2014. They had lost eight straight against ranked foes entering Tuesday night.

RELATED: How will Minnesota come out in Holiday Bowl? That’s anyone’s guess

But Minnesota cranked it to a new level on defense. Much of that credit belongs to defensive coordinator Jay Sawvel, who dialed up the perfect game-plan to shut down Luke Falk’s rhythm.

That was the fewest points Minnesota allowed in a bowl game since 1962. In fact, Claeys became the second Minnesota coach ever to win multiple bowl games. And amazingly, he’s only been running the show for 14 months.

What Tuesday night might’ve did was complicate Claeys’ future even more. Athletic director Mark Coyle seemed set on extending Claeys before the boycott, but those talks went to the back burner when Claeys sided with the players instead of his bosses.

Coyle saw how inspired the Gophers played against a quality team in adverse circumstances.

And just in case you forgot, that was Minnesota’s ninth win. Do you know how many other nine-win seasons Minnesota has had since joining the B1G? One. That might be impossible for Coyle to ignore. 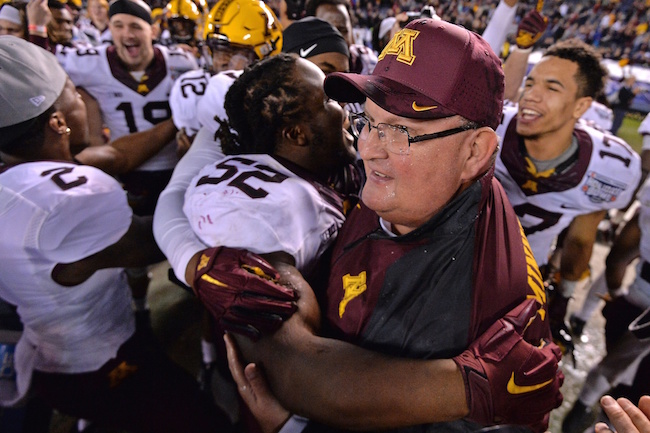 Had the Gophers laid down and played as many expected them to, Coyle’s decision was easy. Now, he’ll be a major scapegoat in the Twin Cities if he boots the guy who just capped off one of the best seasons in program history.

It’s funny because if you think back to the preseason, Claeys predicted 8-10 wins for his team. Others had the Gophers as legitimate B1G West contenders.

Even though Minnesota accomplished both of those things, it still had the feel of a frustrating season entering Tuesday night. Who knows what happens if that ball doesn’t tip to Brooks. Maybe the fourth-quarter woes that plagued the Gophers against Penn State and Wisconsin would’ve resurfaced.

We’ll never know. One play might’ve changed the result, and at the same time, it validated one of Minnesota’s best postseason defensive performances ever.

The last thing anyone would’ve called Minnesota before Tuesday night was “lucky.” The ball finally bounced the Gophers’ way. Gift-wrapped in the form of a tipped pass, Minnesota got an overdue present.

Ten days ago, it wasn’t clear that Christmas would come at all for the Gophers. But hey, better late than never.