Actually, go ahead. Just be ready for a whole lot of sarcasm and some bad jokes from angry fans. None of it is too vicious. They’re mostly just tweets from Gopher fans who’ve seen one too many interceptions from their three-year starting quarterback:

you're forced to watch

Mitch Leidner's been a bit of an enigma for #Gophers fans: pic.twitter.com/UgEV1Z4qDW

After the Holiday Bowl, those tweets will die down. No longer will fall Saturdays be spent wondering why Leidner can’t quite put it all together. His long career will end and he’ll get a chance to play in the NFL. He won’t be a first-round pick like Todd McShay once wrote — we debunked that one quickly — but somebody will roll the dice on the 6-4, 230-pound quarterback.

Leidner’s career, while frustrating to many, hasn’t been all bad. The cumulative numbers are actually better than most would think. Leidner racked up a 23-16 record as a starter, he’s second on Minnesota’s all-time total offense list (!) and he helped the Gophers win eight games in three of four seasons for the first time in school history.

So you have a guy who was essentially the face of the program during its best four-year period — not quite a golden era but the pun still counts — and yet, he was criticized more than any Gopher on a weekly basis.

When you dig deeper, it’s even more complicated than that. 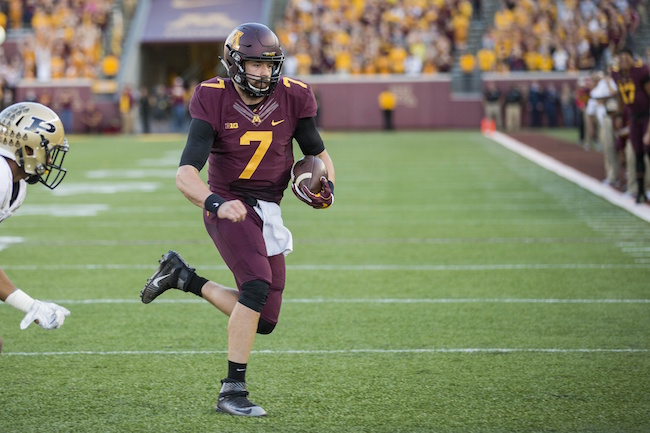 You can spin the stats to make Leidner’s career look however you want it to look. Because it’s practically impossible to quantify as a whole, let’s break it up into sectors.

The rushing, of course, was where Leidner thrived. He wasn’t the fastest or the most powerful ball-carrier in the world, but he moved well for a guy his size, especially in the red zone.

His 32 rushing touchdowns were the most ever for a Gopher quarterback. Believe it or not, he was tied with Laurence Maroney for fourth among all Minnesota players.

Yeah, he tied the three-year starting running back who was drafted in the first round.

Perhaps even more impressive, Leidner was the first quarterback in Minnesota history to run and throw for 30 career touchdowns. But for now, we’re sticking with the rushing. We’ll get to the passing later.

Some might think that Leidner’s numbers are skewed because most of the impressive ones are cumulative. But if you look at his rushing totals for just 2016 against FBS opponents, they’re pretty solid:

Leidner actually had more rushing touchdowns than every B1G player not named Saquon Barkley, Corey Clement, Justin Jackson and Rodney Smith. Is he more elusive than any B1G starting running back? No, but the guy had a nose for the end zone and he provided an element that few teams have.

Some might look at those numbers and just take the good with the bad. Unfortunately for Leidner, there was plenty of bad. 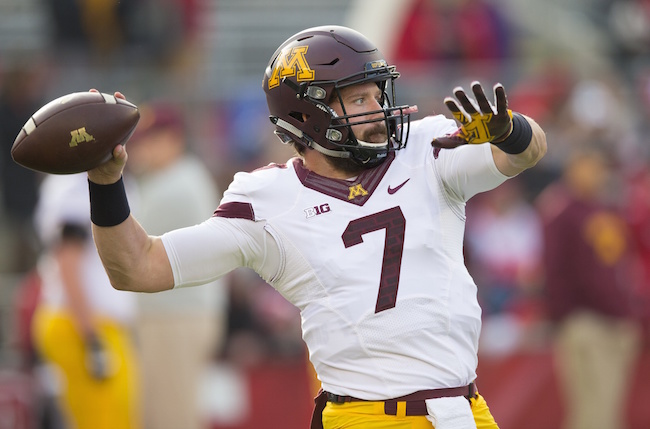 There was a scary stat about Leidner heading into the second-to-last game of the season. Outside of the Indiana State (FCS) game, he had ONE touchdown pass all season. ONE. Leidner had thrown a total of 206 passes vs. FBS teams to that point and only ONE went for a touchdown. Sure, the Gophers weren’t exactly overflowing with pass-catchers in 2016, but that’s hard to do.

For now, we’re going to eliminate the Indiana State game. It’s not because we want to make his numbers look worse than they are, but nobody is going to remember or care about what a guy does against an FCS team.

Just looking at Leidner’s numbers vs. FBS foes in 2016, it’s hard not to get squeamish:

Ok, is taking out the Indiana State game unfair? Fine, we’ll throw it back in there. Happy?

You shouldn’t be, because even with that four-touchdown effort (57 percent of his touchdown passes in 2016), it’s still not pretty. Leidner threw one touchdown pass every 41 passes. No Power Five quarterback had a worse ratio.

To put that in perspective, Rutgers benched its starting quarterback midway through the 2016 season. Even he had one touchdown pass every 29 attempts.

Minnesota obviously isn’t a team that works downfield a whole lot. And when the Gophers are in the red zone, they’d be foolish to throw the ball. They have two talented backs and a quarterback that can run. Touchdown passes are going to be down with those two variables.

But ignore the lack of touchdown passes and just look at Leidner’s interceptions. It’s not pretty there, either.

Purdue quarterback David Blough threw 21 interceptions in 2016. That was five more picks than the next-highest FBS total. Blough threw an interception once every 24.6 passes. Leidner threw a pick once every 23.9 passes. That’s a bad ratio for a guy who wasn’t asked to throw the ball a ton (eighth in the B1G in total passes).

Still, Minnesota was 7-4 in the games Leidner started in 2016. All four of those losses came to teams ranked in the current Associated Press top 25. The Gophers didn’t beat any top-25 teams, but Leidner didn’t lose to anyone that was supposed to.

That actually might be the best way to sum up his career.

Leidner never actually beat a team that finished in the Associated Press top 25. But he also won at Michigan and at Nebraska in 2014, which snapped historic losing streaks. That helped Minnesota clinch its first top-25 ranking in the final AP poll since 2003.

But Leidner could never lead the Gophers past rival Wisconsin and finally bring Paul Bunyan’s Axe back to the Twin Cities. Had he held on to that double-digit halftime lead and not imploded in the second half in Madison two weeks ago, Leidner’s career might be ending on a different note.

In many ways, Leidner’s time at Minnesota mimicked Joel Stave’s at Wisconsin. Both were longtime starters who had their fair share of issues as passers, and both were criticized endlessly for it. But both won games, and both said and did all the right things — unlike the 10 Minnesota players who were suspended for the Holiday Bowl.

Can you imagine if Stave and Leidner let the Twitter trolls get to them? It’s probably a good thing that neither of them had Twitter accounts during their college careers.

Like Stave, Leidner was a guy who seemed to have the support of the only people who actually mattered. They trusted him. Leidner led in ways that weren’t seen in three-and-a-half hour windows on fall Saturdays. That won’t show up in the box score. That won’t matter to the people who yelled at their TVs after every Leidner incompletion.

So how will Leidner be remembered? That depends on who you ask. The responses will probably be all over the map.