Minnesota was the butt of the joke.

On the College Football Playoff rankings show, the panel discussed Wisconsin’s chances to run the table and possibly sneak into the field as a two-loss team. ESPN college football analysts Joey Galloway and Danny Kanell jokingly told Kirk Herbstreit not to sleep on “his” Gophers.

They said they were “Herbstreit’s Gophers” because it was Herbstreit who made the bold preseason prediction that Minnesota would win the B1G West.

Herbstreit was quick to wiggle his way out of the panel’s not-so-subtle mocking of him putting faith in Minnesota. Without actually saying it, Herbstreit said that he’s not picking the Gophers to take down the Badgers and ruin Wisconsin’s run to the B1G Championship.

It came off as Herbstreit saying, “Minnesota is not on the same level as Wisconsin.” Based on their polar opposite schedules, that’s 100 percent accurate. Wisconsin has four better wins than Minnesota’s best win.

But with all of that considered, Minnesota, Wisconsin and Nebraska are all tied in the B1G standings. This Saturday, the Gophers travel to take on the Huskers. Everyone keeps forgetting that the Gophers still control their own B1G West destiny, which is more than Nebraska can say right now.

So maybe the division is better than Herbstreit expected when he made the initial prediction. Still, the Gophers have to like that for the second time in three years, the division is there for the taking with three games left. 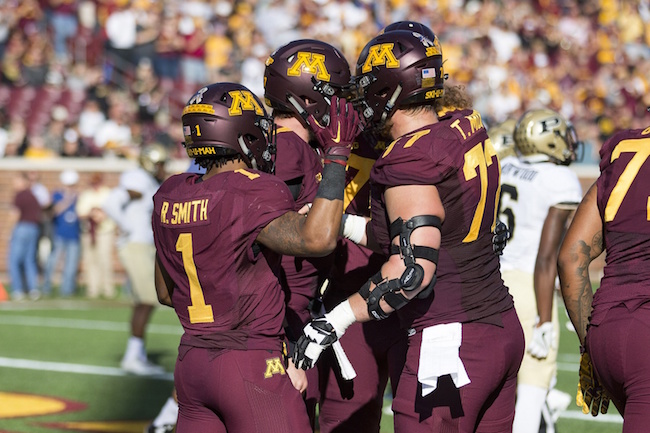 Nobody is saying that the Gophers are destined to win the West. If that happened, it would be one of the biggest surprises of the season, not only in the B1G but nationally, as well.

Winning at Nebraska and at Wisconsin are both daunting tasks. Even beating an improved Northwestern team at home will be a challenge.

But the Gophers knew that in order to get to their first B1G Championship that they would have to knock off the likes of Nebraska and Wisconsin. Even Herbstreit, or anybody else that predicted Minnesota would win the West, knew that would likely have to be the case.

After two heartbreaking losses to start the conference slate, the Gophers put themselves in position to do more than play spoiler. They can flip this entire division upside down.

The beauty of Minnesota’s situation is that the pressure won’t be on them in Lincoln, or if they can make it to Madison without another loss. They won’t have to deal with a murmuring from the crowd like they did when they fell behind to Rutgers at home. For the first time since the Penn State game, they get to be the ones that can silence the crowd.

As we know from 2014 in Lincoln, they’ve done that before:

It’s ironic because this is a very similar situation to the one the Gophers were in two years ago. During that surprise 2014 season, Minnesota needed victories at Nebraska and at Wisconsin to keep their division title hopes alive. The regular-season finale at Camp Randall was essentially the B1G West title game.

Minnesota can still put itself in the same scenario. The Badgers have been hearing for weeks about running the table, getting to a B1G Championship and possibly to the College Football Playoff. All they would have to do is beat their rival for the 13th straight time in another B1G West title game.

The Gophers would be riding a six-game winning streak — if that scenario played out — with everybody still picking the Badgers.

Can you picture how much pressure would be on Wisconsin?

But let’s get back to the matter at hand. One game at a time. Minnesota is focused on winning at Nebraska and continuing the Huskers’ fall from the top 10.

After Tommy Armstrong’s scary injury at Ohio State on Saturday night, he’s not a guarantee to play. The Huskers’ only game without Armstrong under center the last two years was a 10-point loss to Purdue. And even if Armstrong does play, he’ll be tasked with getting around an emerging Gopher defensive line.

On paper, the matchup still favors Nebraska. The Huskers were 7-0 for a reason. The effort that they showed in Madison — when Armstrong was in the game — proved that they’re certainly top-25 worthy.

But there are several holes in any team that allows 62 points. And while their four straight victories came against teams with a combined 5-19 conference record, the Gophers averaged 37 points per contest during that stretch.

How? For those who haven’t been paying attention, tailback Rodney Smith has been really, really good this year:

Like Penn State, Minnesota hasn’t lost in over a month. Have they looked like a top-15 team? No, but did Iowa last year? Who’s to say that the Gophers aren’t another win-ugly team?

As we know, college football gets crazy this time of year. As soon as we start penciling teams into playoff spots and assuming victories, we’re always thrown for a loop.

Everyone has penciled the Gophers out of the B1G West race even though they’re tied for the lead with control of their own destiny. Experts are backing out of preseason predictions when really, the road to a B1G title is the same as it’s always been for Minnesota.

Galloway, Herbstreit and Kanell can joke all they want. But a few weeks from now, that sarcastic prediction might have a more serious tone to it.

Don’t sleep on the Gophers.