The University of Minnesota has announced that it will be cutting some ties with the Minneapolis Police Department, following the death of George Floyd.

On Monday, Floyd died after a Minneapolis police officer dug his knee into his neck for several minutes, despite Floyd stating that he could not breathe. Four officers connected to the death were fired, but the University of Minnesota is now wanting to distance itself from the department.

Wednesday, the university announced that the relationship between it and the police department will not move forward. University of Minnesota President Joan Gabel released a statement:

Today I am announcing two immediate changes regarding our relationship with MPD.

First, I have directed Senior Vice President Brian Burnett to no longer contract with the Minneapolis Police Department for additional law enforcement support needed for large events, such as football games, concerts and ceremonies.

Second, I have directed University Police Chief Matt Clark to no longer use the Minneapolis Police Department when specialized services are need for University events, such as K-9 Explosive detection units.

Not all ties will be cut with the Minneapolis Police Department, as there will still be joint patrols that directly enhance the safety of the university community.

Below is the complete release from the University of Minnesota: 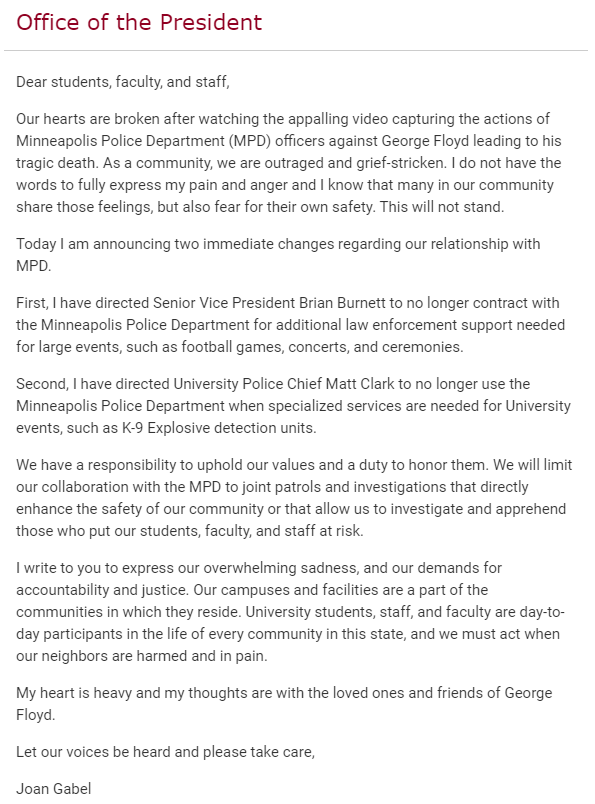