Why Minnesota is a bit of an enigma heading into 2019

Here’s a riddle for you: what do you call a team too relevant to be considered a dark horse yet too unproven to consider it a favorite?

The Golden Gophers are preparing to put the oars in the water for the third year of the P.J. Fleck era, and it’s probably the most anticipated college football season the state has experienced in at least a season. Coming off a 7-6 season, which included breaking a 14-year losing streak to Wisconsin and a victory over Georgia Tech in the Quick Lane Bowl, Minnesota’s end to the 2018 campaign has sparked a lot of interest entering 2019.

Nobody really seems to agree on where Minnesota will finish this year, though. Whether the Gophers are poised to be one of the contenders in the West or if they’ll be clawing for bowl eligibility at the end of the year again. At this point in the offseason, Minnesota is basically the Jack-in-the-box of the B1G.

Predictions vary for the Gophers based on what media projection you read. Stadium’s Brett McMurphy has Minnesota as one of the five B1G teams that will miss a bowl game this year. Athlon Sports pegs Fleck’s bunch as another seven-win squad, finishing fifth in the division with a 4-5 league record.

ESPN, on the other hand, has a very different opinion.

According to ESPN’s Football Power Index (FPI), Minnesota has a win total projection of 8.4, but is favored in 10 games. The only games in which the Gophers will be the underdog are against Penn State and Iowa. And, if it played out that way, it would be enough to get Minnesota a spot in the B1G Championship Game in early December, based on ESPN’s other FPI projections. 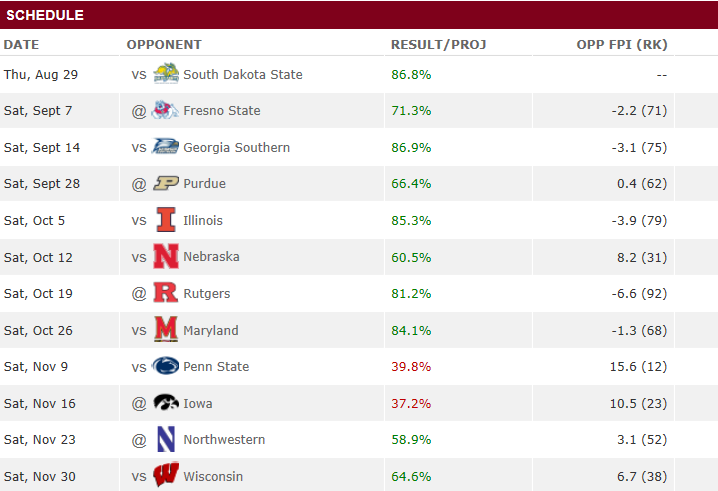 The vast difference in projection creates quite the storyline, doesn’t it? Some media outlets consider the Gophers a fringe bowl team. Others expect them to be hunting for a division title. Even I’ve made the claim that Minnesota would win the West at the conclusion of spring football.

Why, though, is there so much variation in Minnesota’s 2019 projections? Why is Fleck’s third year in Dinkytown such an enigma? There are a few reasons.

A lot is going right for Minnesota

One of the youngest and most inexperienced teams in college football last season gets one year older. Ending on such a strong note last season — winning three of the final four contest — and adding another spring under their belts, the Gophers have all the pieces in place to make a push for a division title.

That group has the potential to be one of the most well-balanced and efficient offenses in the B1G this fall. Even though a lot of that talent is still relatively young, it’s arguably the most skilled the Gophers have been offensively since the Laurence Maroney-Marion Barber days.

Minnesota returns eight starters defensively, too. That includes defensive back Antoine Winfield Jr. and linebackers Carter Coughlin and Kamal Martin. The change from Robb Smith to Joe Rossi at defensive coordinator was a huge benefit for Minnesota, and the Gophers’ defense will have a more simplistic defensive approach, which should result in dramatic improvement from a year ago.

Hey, it worked for the final four games in 2018, with the Gophers holding Purdue, Wisconsin and Georgia Tech all under 20 points in three victories. Imagine what Minnesota can do with Rossi working with the defense for a full offseason.

And, of course, there’s Minnesota’s schedule. It’s not “easy” by any stretch, but it is favorable. The Gophers get Nebraska, Penn State and Wisconsin at home, and two of the three cross-division games are against Maryland and Rutgers. Trips to Purdue, Northwestern, Iowa and Fresno State won’t be easy, but it’s certainly manageable.

Hitting 10 wins and winning the West is  quite a leap for Minnesota, but it’s far from impossible.

So, here’s the concern with the Gophers

If everything was positive in Minneapolis, there wouldn’t be quite the gap in projections among the media outlets. The bottom line is that, while Minnesota returns a lot from last year’s team, that 2018 squad was incredibly inconsistent.

After starting the year 3-0 in non-conference play, the Gophers dropped four straight games, including blowout losses to Maryland (42-13) and Nebraska (53-28). They also lost a 55-31 contest to Illinois. None of those three teams were bowl eligible.

Because so much of Minnesota’s returning talent is still on the green side, inconsistent play is still a concern. Performances may not be quite as hit-or-miss as they were a year ago, but a 12-game schedule takes a toll on a football team, particularly ones with limited experience.

Is that reason enough to think the Gophers won’t reach the postseason? Probably not. Certainly, though, if Minnesota’s performances are inconsistent, it could be the difference between winning six to eight games or hitting the nine or 10-win mark.

What should be the expectation in Year 3?

To put it simply, Minnesota is going to be a contender in the B1G West. It has the talent, there’s an additional year of experience and the offense could be one of the best in the conference. Factor in a favorable schedule, and the Gophers are sitting pretty heading into 2019.

That’s not to say Fleck will have his program challenging for a spot in the top 10 or a bid in the College Football Playoff. It’s not close to that level yet. But the B1G West is possibly the most open division in the country and Minnesota will be in the mix.

Everyone in the West is enduring some growing pains. Wisconsin, Iowa, Northwestern and Purdue all lost a significant number of contributors. Nebraska is still trying to gain its footing under Scott Frost. Minnesota is kind of in that sweet spot right now.

Are the Gophers ready to take the next step? That’s really the question everyone is asking. And it’s what makes Minnesota such an enigma entering the season.