Tennessee developed a habit in the last few years.

It seems that every year is supposed to be “the year” in Knoxville. Expectations are always high, and like clockwork, they’re never met. Chalk it up to the ever-competitive SEC — SEC East teams all compete NOT to play Alabama — or the top-10 recruiting classes. In a football-crazed place like Knoxville, hype isn’t hard to come by.

Dominant seasons, however, are. Usually, dreams of a national title or a BCS/College Football Playoff berth are dashed by the end of October and the rest of the college football world writes Tennessee off. Then the Volunteers — with their four and five-star recruits — match up with an above-average B1G team and blow their doors off.

Maybe that’s what repeats the cycle of unfulfilled promise for Tennessee fans. They see what their underachieving team can do against a B1G team full of three-star athletes and they use it as the launching point for the following season.

That narrative could play out exactly like that this year. Tennessee has a Music City Bowl matchup with a Nebraska team that looked disinterested down the stretch. The only difference is that instead of facing a good, not great B1G team in Florida, the Volunteers will get that matchup in the state of Tennessee.

B1G teams fell to Tennessee each of the last three times and four of the last five in the 21st century. Can the Huskers stop the B1G bleeding?

There’s been a lot of that at the hands of Tennessee. 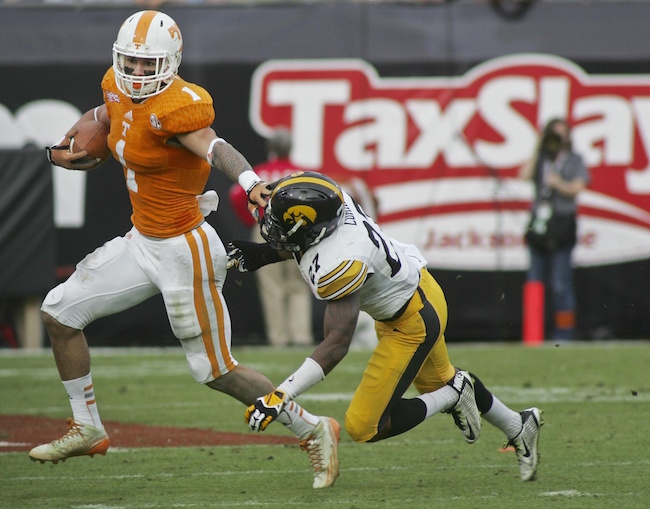 For one reason or another, the Vols have been a yearly thorn in the B1G’s side come bowl season. And while they haven’t done much in the regular season to boost the SEC’s brand, they certainly have in the postseason.

Speaking of those matchups, here’s how each of them went in the 21st century:

Let’s focus on the two most recent games, because frankly, the wins against Wisconsin and Michigan happened before current players were in high school.

Most troubling the last two years was the fact that the B1G looked severely overmatched against Tennessee’s athletes. There was a noticeable discrepancy in speed and explosion off the line of scrimmage. For two teams that prided themselves on winning the battle in the trenches, Tennessee provided about the most humbling experience possible.

Keep in mind that Northwestern actually had a top-10 defense for most of the 2015 season. The Wildcats had several All-B1G players on that unit, and for most of the afternoon, Butch Jones’ offense carved them up.

Nobody feasted more in those two matchups than Jalen Hurd. The Tennessee running back gashed Northwestern for 130 rushing yards and a touchdown, and he racked up 122 rushing yards plus two scores against Iowa.

Instead of dealing with the 6-4, 240-pound behemoth, the Huskers’ toughest matchup will be Josh Dobbs, who has been at Tennessee for basically the last decade. Unlucky for Nebraska, Dobbs played some of the best ball of his career down the stretch.

RELATED: It’s only two games, but beating the SEC still matters for the B1G

In his final four games, he completed 69-of-86 passes (80 percent) for 969 yards, 11 touchdown passes and one interception. Oh, and he also ran for 393 yards and four touchdowns. The ugly regular-season finale loss to Vanderbilt covered up the fact that Dobbs led the Vols to an average of 50 points in those final four games.

And keep in mind, he can do this:

So yeah, Nebraska will have its hands full, regardless of what history suggests about Tennessee vs. B1G teams. Nebraska would’ve been a significant underdog at full strength. This was the team that was outscored 125-30 by ranked teams.

Now, the Huskers’ chances are looking even worse.

They’ll definitely be without the likes of Jordan Westerkamp and Nathan Gerry, both of whom are arguably their best players on each side of the ball. And with each passing day, it’s looking less and less likely that Tommy Armstrong, Jr. suits up one more time. If Ryker Fyfe is the guy — with all due respect — that will play right into the Tennessee narrative.

Two years ago, the Vols faced an Iowa team that was a mess at quarterback. Jake Rudock (the Iowa version) was benched in the middle of the game in favor of the inexperienced C.J. Beathard. The Hawkeyes weren’t a disaster on offense, but Tennessee was up 28-0 in the first 18 minutes of the game.

Against Northwestern last season, the Vols put the clamps on first-year starter Clayton Thorson. The Cats already had the B1G’s most one-dimensional offense coming into the Outback Bowl. Against the Vols, they were a no-dimensional offense.

Without Armstrong, Nebraska is in danger of falling into that same trap. They absolutely don’t want Fyfe throwing the ball 45 times in a game. The last time that happened, the Huskers lost to Purdue.

Nebraska’s only chance is taking advantage of Tennessee’s 111th-ranked run defense. Just as they did in last year’s Foster Farms Bowl, the offensive objective should be clear as day. Nebraska will do everything in its power to control the clock, and keep Dobbs from getting into a rhythm.

This scenario feels exactly like the Tennessee rhythm — get written off by the national pundits and go beat up on a good, not great B1G West team. All signs point to Nebraska completing the trilogy.

Anything but another Tennessee rout would be a surprise ending.