When Taylor Martinez went down with what turned out to be a season-ending foot injury, in stepped a redshirt freshman gunslinger. Tommy Armstrong Jr. brought mixed emotions to Nebraska fans. Some were excited to see this young, big-armed quarterback get an opportunity. Others preferred he sit out for a year and let former walk-on Ron Kellogg III manage the most-important position.

Nerves came with watching a redshirt freshman operate behind a preseason top-25 team. The Huskers had hopes of getting back to the B1G Championship and erasing the 70-point disaster from 2012. Was Armstrong too inexperienced to get them there?

The Huskers hedged their bets and ultimately rolled with a two-quarterback system. If you turned on “Big Red (Over)Reaction” after a game, you heard callers debate that subject back and forth.

On Saturday, Armstrong will run out of that Memorial Stadium tunnel for the last time. Assuming he plays — still not a guarantee with his hamstring/ankle injuries — and accounts for one score, Armstrong will earn sole possession of Nebraska’s all-time touchdowns lead. He would pass up Heisman Trophy winner Eric Crouch. 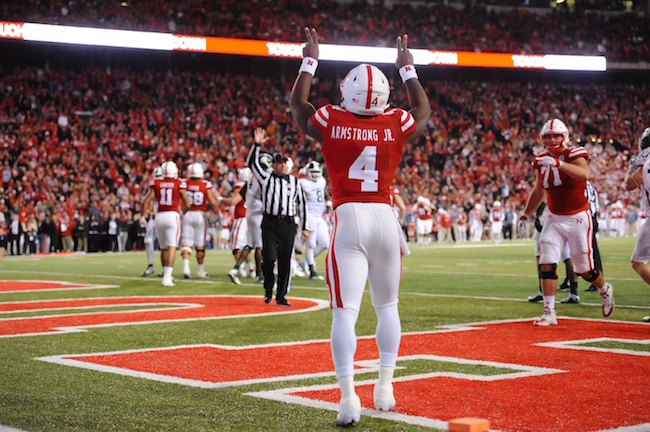 There’s some irony in the fact that Armstrong took over for Martinez. In many ways, the two had similar paths at Nebraska. Both made electrifying plays and dominated the record book in their four years as starters. And both were the faces of more crushing losses than memorable wins.

While Armstrong laid motionless, Chris Fowler mentioned on the broadcast that it would be a shame if that was the end of the road for the Nebraska quarterback. Four years finished on one fluke play. None of the 407 carries before that one resulted in Armstrong being taken off in ambulance.

But as he did throughout his career, Armstrong bounced back. It was a miracle that he hustled into Ohio Stadium rocking his hospital scrubs to catch the rest of the game.

Many expected him to at least be out for the Minnesota game the following week. But somehow, Armstrong bounced back for that one, too. And when he was dealing with ankle and hamstring issues, what did Armstrong do?

He delivered a game-winning touchdown run in the fourth quarter:

Moments like that made 2016 the best season of Armstrong’s career.

Forget the fact that he probably won’t throw 22 touchdown passes like he did each of the last two seasons. Ignore the likelihood that he doesn’t throw for 3,000 yards like he did last year. You can even overlook the possibility that Armstrong has his lowest completion percentage since his freshman year.

For the first time in his career, Armstrong has a chance to lead the Huskers to a top-15 finish. Martinez never did that. In fact, the last quarterback to do that was technically Zac Lee. But let’s be honest, the 2009 team was led by Heisman Trophy candidate Ndamukong Suh and tailback Roy Helu.

A vocal Bo Pelini supporter, Armstrong watched the coach that recruited him get pushed out of Lincoln. Armstrong had every right to transfer in the middle of his career. With a new staff, a new offense and a completely new era ahead, it would’ve been easy to leave for a school in his home state of Texas. Lord knows he would’ve had plenty of suitors.

But instead, Armstrong stuck it out. He went through the growing pains of learning a completely different offense. His first year in the Riley era was about as disastrous as one could’ve drawn up. His 16 interceptions were the second-most of any player in FBS.

That culminated in the regular-season finale when Armstrong had a chance to salvage some of Nebraska’s dignity by knocking off undefeated Iowa. Instead, he threw four interceptions and heard a chorus of boos:

The interceptions always diluted Armstrong’s body of work. In his four-year career, he threw 44 picks. Take the interception totals of Crouch, Frazier and the late Brook Berringer and they still won’t add up to 44.

Does that all come back to Armstrong? No. Certainly he wouldn’t have minded to have had a better offensive line and some of those historically dominant blackshirt defenses to work with.

Fair or not, that last number is the one many will forever associated with Armstrong. And fair or not, perspective defined those three top-25 wins.

He beat No. 19 Georgia in the Taxslayer Bowl. But that was after another Nebraska didn’t meet expectations in an eight-win regular season. Armstrong led Nebraska to one of the biggest upsets of 2015 when the Huskers knocked off unbeaten Michigan State. But his game-winning touchdown pass only happened because referees admittedly missed Brandon Reilly step out of bounds, and many questioned of Nebraska deserved to win that game.

Armstrong’s most heroic effort came this year against No. 22 Oregon when he marched the Huskers down for a game-winning drive to clinch an emotional victory. But the Ducks lost six of their first seven Pac-12 games and made that top-25 win look like fool’s gold.

For whatever reason, there’s always been a bit of a damper on Armstrong’s biggest wins. That’s sort of fitting of his career. 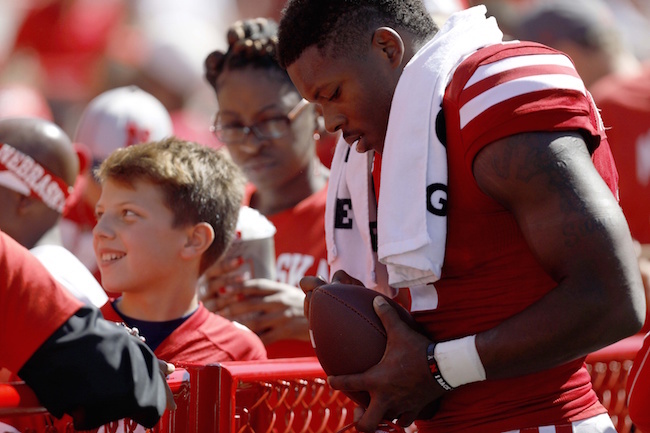 Armstrong won’t be remembered in the same breath as Crouch or Frazier, even though he has almost all of their records. Holding him to that kind of standard wouldn’t be fair. Instead of trying to define Armstrong by his all-time records or the awards he didn’t win, consider what he did do.

He kept his head above water and never blamed anyone but himself for his mistakes. Not even Pelini could say that.

Armstrong provided stability and helped hold the program together during a tumultuous time after Pelini was fired. The Huskers aren’t anywhere near an eight-win team in 2016 without that.

He gritted his teeth and started all but one game since his freshman year. You know he had several injuries that should’ve sidelined him for multiple weeks. Still, his next start will set the program record at the position.

RELATED: Gutsy Tommy Armstrong gave Nebraska what it was desperate for

A roller coaster ride to the end, Armstrong will deserve an ovation not because he set program records. He’ll never put himself above the greats that he passed up. Armstrong should be appreciated for the way he ended his career.

Only time will tell if he’ll be remembered as a Nebraska great of the past.