Even if Nebraska doesn't play a game this fall, it already won

Another day, another instance in which I find myself saying “I’ve never seen anything like this.”

What happened in the B1G is indeed unprecedented on a variety of levels. A 14-team conference canceled its fall football season without the rest of the Power 5 conferences in agreement. That alone is going to be talked about for decades.

The response to that was plenty significant in itself. I’ve never seen anything like what Nebraska did. Neither have you.

Well, maybe you’ve witnessed a traditional college football power in such opposition to a decision to cancel fall football made by the conference that cuts it a $50 million annual check. Personally, I’ve never seen that.

As of 2:45 p.m. ET on Wednesday afternoon, “Nebraska” was trending nationally on Twitter with over 37,800 tweets. Dare I say, those tweets probably didn’t have much to do with Hastings, Nebraska, where Kool-Aid was invented (go look that up and then tell me that Kool-Aid Days doesn’t look like some good wholesome family fun).

But don’t get it twisted. People should be sipping the Nebraska Kool-Aid in the wake of the program’s resistance to a canceled fall season just because the B1G said so.

Be honest. You would too if it was your team.

Well, I suppose some of you can actually relate to that. Ohio State is asking the same sort of questions that Nebraska is. The difference is that one of those teams was nationally relevant the past decade and one wasn’t. Some, like Desmond Howard, Michael Wilbon and Paul Finebaum, told Nebraska to shut up or leave.

Of course, Nebraska and Ohio State’s idea of going rogue — something commissioner Kevin Warren can relate to — and seeking other fall options was treated differently by some. These are consecutive tweets from the ESPN College Football account: 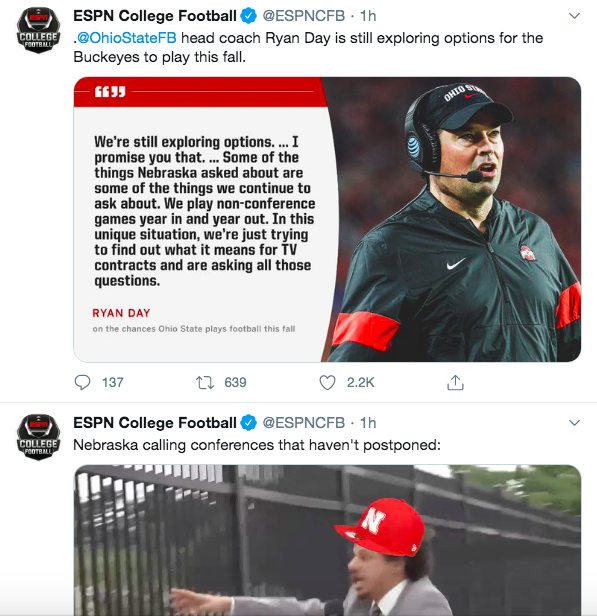 Once you look past the hypocrisy there, look at that quote from Ryan Day.

That’s right. Nebraska has Ohio State on its side. Call me crazy but in terms of the check list of “how to get things done in the B1G,” that seems like a pretty big thing to check off the list.

And again, there’s no guarantee that either program succeeds in its attempt to even schedule a scrimmage. We know that Warren tried to pour $50 million worth of cold water on that Tuesday night when he told Yahoo’s Pete Thamel that if Nebraska played football it could not do so “and be a member of the Big Ten Conference.”

If you were wondering how much that quote from Warren was really respected, Day’s quote came out after that story made the rounds. In other words, Ohio State and Nebraska aren’t treating Warren like he has the final say in the matter.

These are desperate times. Ohio State and Nebraska have young coaches who aren’t just going to sit back and accept the status quo because “well, that’s what the bossman said, so I guess we’ll take our ball and go home!”

Nope. People are asking legitimate questions about the Power 5, um, power struggle. Like, would the league really kick out Ohio State if it scheduled a game against UCF? Are the Huskers out the door if they set up a scrimmage against BYU?

Nebraska reportedly has Big 12 officials saying it would be welcomed back “with open arms” if it were to leave the B1G. Obviously there are major contract issues that would prevent that from being a “highest bidder” situation, but this is a smart move even if it doesn’t go anywhere.

The optics of Frost’s push certainly helps. When you have top recruits out here telling B1G coaches that they want to go to a conference that “supports football,” you certainly have a major topic of negative recruiting to work against. Frost and Day are doing everything in their power to combat that. They have to. Whether that’s a main motivator for continuing these efforts to find ways to play football in the fall of 2020 doesn’t matter.

Want to know what does matter? I’d argue that perhaps with the exception of the days following Frost’s hiring, right now is about as unified as Nebraska has been in quite some time. That’s from the university president down to the fan who sits in the 300-level 1 game per year.

There’s not some sort of Bo Pelini-Harvey Perlman angst. Gone is the battle between Nebraska fans and Mike Riley/Shawn Eichorst. There’s unity in Lincoln, and that’s something that can be built on even if Frost and Co. ultimately have to go home with their tails tucked between their legs this season.

Will that be the result of this? I couldn’t tell you. What I do know is that it took serious guts to not just accept what’s expected to be a brutal reality for that university and for that state. Who cares if the Huskers took some jabs from pundits? They already get their fair of shade as it is. It’s not like the B1G is about to kick out a team that has been selling out its home games since 1962 just because it stood up for something it believed in. Sorry, Howard and Wilbon.

Then again, Warren has gone rogue before. Plus, it’s not like he was the commissioner when Nebraska jumped from the Big 12 to the B1G. That was Jim Delany. And if we’re being honest, it wasn’t Warren who did anything to help the league get to this point. That is, a 14-team league that cuts $50 million annual checks for TV revenue. Even if that did happen and the move back to the Big 12 happened, who knows how close those TV checks will be compared to the B1G in the years that follow this whole mess.

Some took Nebraska’s resistance as this bravado that just because it’s a traditional college football power, it thinks it’s too good for a conference that’s been around since the 19th century. Rather, it should have been taken as a program that feels that it is following the proper safety protocols and desperately wants to play football, as Frost said “regardless of what anybody does.”

He got Day on board with that. Who knows if programs like Michigan and Penn State will follow in their footsteps of trying to make fall football a thing in 2020. What would the B1G do then if all of them decided they were willing to break the contract and find new conferences? While that’s unlikely at this stage, it’s still something that the B1G’s elite programs have to at least be curious about.

Regardless, Frost showed his hand to the B1G. Whether the conference likes what it sees doesn’t matter to him.