Why — manufactured or not — Iowa-Nebraska is becoming an actual rivalry

Six years ago, Nebraska made one of the best possible decisions for its future by joining the B1G.

With that, the Huskers said goodbye to their heated rivalries from their Big Eight/Big 12 days. Ask a Husker fan who their least-favorite team is, and you’ll hear a variety of answers. Some will go Colorado, others will go Missouri. You’ll probably get Oklahoma and Texas, too.

Nebraska needed a new B1G enemy. Naturally, Iowa was the obvious choice. The border-state schools actually played four years in a row from 1979-82. Given their agricultural backbones, it made sense for the B1G to pit the two states against each other.

Sure, it was a manufactured rivalry. Not everyone liked that. Iowa, despite the countless rivalry trophies it played for, didn’t have a true B1G rival. But rivalries aren’t meant to be made up. How was Iowa just supposed to start hating a program it played against six times since 1950?

Every single year that schedule comes out, Husker fans count Iowa as a win. Even last year, when Nebraska was 5-6 and Iowa was 11-0, there still seemed to be a strong belief that Nebraska would beat Iowa.

When these two teams square off on Friday, it’ll be for the sixth time. Each of the last two games were thrillers. Depending on Nebraska’s quarterback situation, this year’s showdown could be a nail-biter, too.

The day after Thanksgiving, Iowa and Nebraska will square off in the middle of the afternoon on ABC, just as Jim Delany drew it up. 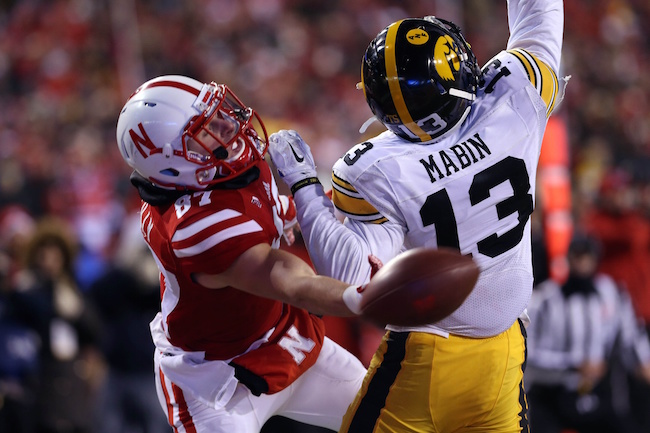 It’s somewhat amazing that it took so long to announce when and on what channel Iowa and Nebraska would play. This game now belongs in the mid-afternoon slot on ABC until proven otherwise. It epitomize hard-nosed, late-November B1G football. Despite that, they’re actually entertaining.

The old saying is that “it’s not a series until somebody wins a road game.” That’s usually said for the playoffs, but the same principle can be applied to a rivalry game.

Four years in a row, the road team won the Heroes Trophy. Three of the those were one-possession games:

Of their five meetings, the 2012 Iowa group was the only one to miss out on a bowl game. And what happened that year? Iowa needed one final drive to end Nebraska’s Rose Bowl bid and keep the Huskers out of the B1G Championship. That, however, didn’t happen.

It might not necessarily have national title implications like Michigan-Ohio State, but there always seems to be something on the line besides bragging rights. In 2012 and 2015, B1G Championship and Rose Bowl berths were on the line. In 2013 and 2014, many believed it was a make-or-break game for Bo Pelini.

Speaking of that, remember when he nearly hit an official with his hat during the 2013 game?

Pelini wasn’t the only coach who lost his cool in this rivalry:

That’s what rivalries are suppose to bring out. Do you think Kirk Ferentz loses his cool early in the second quarter against Illinois? Absolutely not.

Ferentz knows what beating Nebraska means, not only for postseason aspirations, but also for recruiting. These programs aren’t blessed with recruiting hotbeds like Maryland or New Jersey. But the talented players that do come out of the two states often pick between Iowa and Nebraska.

Iowa actually got some big-time contributors because Nebraska wouldn’t offer them a scholarship. Guys like Drew Ott and Nathan Bazata came from small, eight-man programs in central Nebraska. When the Huskers didn’t offer them, they went to Iowa with chips on their shoulders.

But both Fant and Raridon committed to their respective border-state rival because of interest shown. Nebraska wants Iowa’s best, and Iowa wants Nebraska’s best.

Great rivalries start on the recruiting trail. Right now, both schools are building that. As a result, it creates the cliché “it just means more” feel to the game for some of these kids. 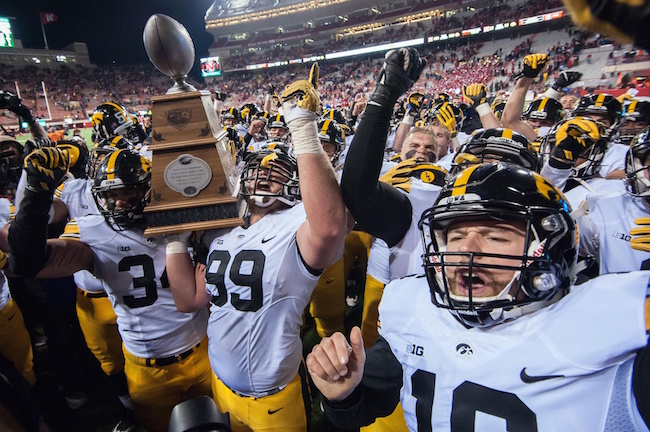 After just five years in the same conference, the “it just means more” cliché appears to be true when these teams play. And even when they don’t, there’s back-and-forth trash talk. Last year, Iowa was the team everyone doubted during its undefeated start. This year, it was Nebraska that was being questioned by the world after its undefeated start. Both fanbases questioned each other’s legitimacy.

Yet even with all of that success, last year was an eight-point game that went down to the wire. This year’s game, even with Nebraska cracking the top 10 earlier while Iowa was coming off home losses to North Dakota State and Northwestern, figures to be an even battle.

RELATED: Nebraska’s quarterback situation for Iowa is murky, to say the least

These teams might not ever sustain separation from one another. They traded off winners the last four years, and if Nebraska wins on Friday, it’ll be five. But like any good rivalry, the result is anyone’s guess.

Whether or not these two programs want to admit it, they’re perfect rivals for each other.

Thirty four years ago, Bill McCartney came into Boulder and declared that Nebraska was Colorado’s rival even though the Huskers dominated the Buffs. Nebraska initially scoffed at that. What it turned into was one of the country’s best rivalries, and ultimately, it made Nebraska better.

Six years ago, the conference powers that be declared Iowa and Nebraska rivals. They added some trophy, stuck it on Black Friday and tried to create something out of nothing.