You can argue whether or not rankings matter, but at the very least, they’re noticed.

When four-star recruit Joshua Moore verbally committed to Nebraska on Sunday, many noticed the Huskers moved into the top 10 of the 247sports class rankings. Yes, it’s only June, but consider the circumstances.

Nebraska got a verbal pledge from a blue-chip Texas recruit who had 58 (!) offers. Moore could’ve essentially picked any school in the country, including the two in-state powers (Texas and Texas A&M) that made late pushes for him.

Keep in mind that Moore attended IMG Academy (Bradenton, Fla.) for the last five months, where he was surrounded by the top recruiters in the country on a regular basis. One of them happened to be Nebraska receivers coach Keith Williams. He was integral in earning what was arguably the program’s most impressive recruiting victory of the Mike Riley era.

With Moore on board, the 2018 class is already shaping up to be Riley’s best.

When Nebraska rattled off five wins to start the 2016 season, it earned a top-10 spot in the Associated Press poll. The national discussion quickly shifted to whether or not Nebraska was an elite team. The fact that that was even a topic of debate on College GameDay was noteworthy for a fanbase that had been longing to be an elite program for the previous two decades.

The Huskers eventually fizzled out against tougher competition in 2016. It answered the question many had in Week 6, though not in the way Nebraska fans wanted.

In a way, we’re sort of at a similar point in the recruiting cycle. A lot can happen before National Signing Day. The competition will get tougher, and Nebraska will once again try to show the college football world that it’s among the country’s elite programs.

But on June 19, the question is worth asking: Can Riley sign the Huskers’ top class of the recruiting rankings era?

We won’t have an answer to that question for a while, but it’s worth seeing what the 2018 class is up against.

Moore isn’t the first blue-chip Texas recruit to fire up the Nebraska fanbase. Husker fans remember Aaron Green all too well. Billed as the next great Nebraska I-back, Green was the No. 5 running back and the No. 31 prospect in the 2011 class. But after one year of limited opportunities in Lincoln, he transferred to TCU.

At the time, Green was part of a loaded 2011 class the featured three blue-chip Texas recruits (247sports): 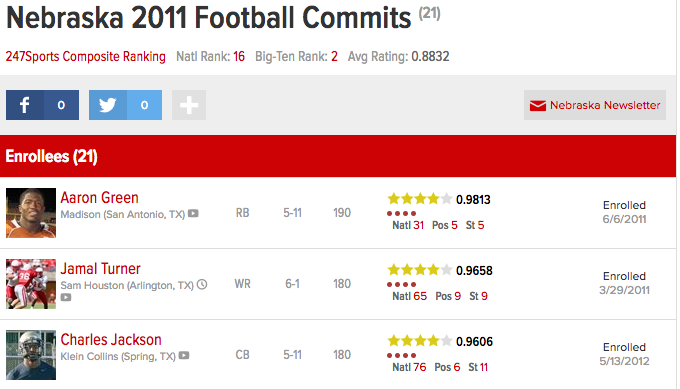 We can’t predict the future of the 2018 class. We can, however, take a closer look at that number in the upper right-hand corner of the 247sports rankings.

Nebraska’s 2011 class had an average recruit ranking of 0.8832. That was the program’s best mark of the recruiting rankings era (247sports started class rankings in 2001). For comparison’s sake, that’s what the measuring stick will be for the 2018 class.

As it stands on June 19, Nebraska’s 2018 class has an average ranking of 0.8999. Based on last year’s rankings, that’s roughly what the mark will be for a top-10 class on signing day. Obviously if the Huskers get a few more four-star recruits committed, that 0.8999 number will rise.

Odds are that number will dip. The 247sports crystal ball only predicted one more four-star recruit committing to Nebraska, and that’s Moore’s brother, Jordan (he’s currently committed to Texas A&M).

Nebraska’s class could slow down, but as we know with 17-year-old kids, things can also change in a hurry. Commitments don’t always hold. On the flip side, what if the Huskers have a season like Penn State just had? We’ve seen that when traditional powers — especially ones with diehard fanbases — have a resurgence it takes recruiting to the next level.

That was Riley’s goal when he came to Nebraska. The Huskers had to modernize their approach and adapt to the national recruiting game to become a national power again. They aren’t a national power yet, but their top three-ranked 2018 pledges embody exactly what Nebraska fans have been looking for.

Moore was a huge get from the recruiting hotbed state (Texas) that every program tries to win, Los Angeles native Brendan Radley-Hiles was part of Riley and Keith Williams’ “Calibraska” movement and Cameron Jurgens was the small-town Nebraska recruit who committed to the Huskers before he could drive a car.

That, in a nutshell, was everything Nebraska athletic director Shawn Eichorst could’ve hoped Riley would bring to the table as a recruiter. Recruiting was a big reason that Eichorst made the controversial decision to fire Bo Pelini and bring Riley on board. Pelini’s key talent pipelines dried up.

Were recruiting rankings the only reason Pelini didn’t last in Lincoln? Of course not. But he would’ve had a better chance to stay if he sustained recruiting momentum like Riley has now.

Recruiting rankings — just like AP rankings — help define perception. Right now, the perception is that Nebraska is on the up and up. Based on Nebraska’s 2018 class, you wouldn’t know that Riley has a 15-11 record or that he was 0-4 against Iowa and Wisconsin in his first two seasons.

But credit Riley and his staff for carving out a presence in some of the top recruiting areas in the country and landing some big-time commitments. Right now, more and more top recruits are buying what Nebraska is selling.

Perhaps Moore can lead the Huskers’ return to elite status on the field, too.

Connor O'Gara
Connor O'Gara is the senior national columnist for Saturday Tradition. He's a member of the Football Writers Association of America. After spending his entire life living in B1G country, he moved to the South in 2015.
RECENT ARTICLES
NEBRASKA
Nebrasketball: Huskers announce leading scorer has left team
NEBRASKA
Ndamukong Suh explains why he was 'pissed off' to not win Heisman Trophy in 2009
NEBRASKA
Report: Nebraska already working on rescheduling Ireland trip for future season
NEBRASKA
Nebraska AD Bill Moos discusses future: 'I want to stay here until we get back'