It wasn’t pretty, but Nebraska did what it had to do; get to Wisconsin unbeaten

For the third time this year, Nebraska went into halftime trailing. All of those games were at home, and in each one of those games, the Huskers were favored.

The Huskers haven’t gone into the locker room with a two-touchdown lead this year. They also haven’t won a game by more than two touchdowns since Week 2.

Even as a three-touchdown favorite against Purdue, Nebraska followed that formula again on Saturday. The Huskers trailed at the break and grinded out an ugly win.

People will doubt if Nebraska is as good as its No. 8-ranking suggests, and rightfully so. But the Huskers are 7-0 and heading to Madison undefeated with a chance to essentially close the door on the B1G West.

The question is if they’re strong enough to slam it shut. 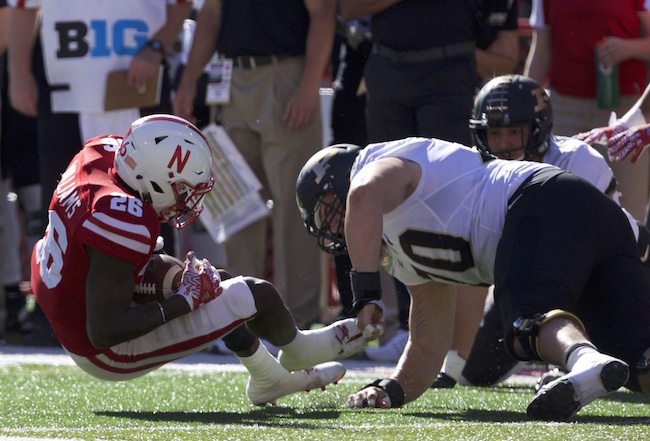 Style points haven’t been important to Nebraska all season, and they certainly weren’t important to the Huskers on Saturday.

The Huskers didn’t start slinging the ball around in an attempt to get all the points that it left on the board in the first half. The running game did the heavy lifting down the stretch and the Huskers earned a ho-hum 13-point win.

And while Nebraska improved to 7-0, the weaknesses were still there. The Husker secondary allowed David Blough to rack up nearly 200 yards in the first 18 minutes, Tommy Armstrong still made back-footed throws and the Huskers still struggled to string drives together.

Does Nebraska deserve to be ranked No. 8? Based on their seven wins and zero losses, yes.

Does Nebraska look like a top-10 team? Absolutely not.

Part of that is competition, which hasn’t been great. But even with a favorable schedule, Nebraska hasn’t had a dominant win against a Power Five team yet.

Take a look at the teams ranked around Nebraska:

Nebraska has not looked as good as those teams. That’s why nobody will pick the Huskers to go into Madison and pull out a victory on Saturday. That’s why, even with two losses, Wisconsin looks like the better team.

Next Saturday’s showdown in Madison will warrant all sorts of discussion about how good Nebraska really is. Games like Saturday are fresh in the minds of all the national pundits, who laughed when asked if the Huskers were really a top-10 team:

They just laughed at us on national tv…

The Huskers can play the disrespect card all they want. It worked against Indiana last week. If that was still on their minds on Saturday, it worked again.

That won’t matter next Saturday. What will matter is if Nebraska can finally play a clean game against what will be its toughest opponent to date. Remember when the Oregon win was supposed to be that tough test? It was at the time, but the Ducks are 2-5 and 0-4 in the Pac-12.

But if Nebraska truly wants to show the world it’s a contender, it can’t go into Madison and expect to start slow and rally in the fourth quarter. It can’t expect to simply maintain its level of play and win at one of the toughest venues in all of college football.

It was OK for Nebraska to just get by against the likes of Northwestern, Illinois, Indiana and Purdue. For the majority of the time they spent on the field with those teams, the Huskers played at their same level. If they play like that at Wisconsin and Ohio State, they’ll really get laughed out of the room.

Otherwise those slow starts will turn into disastrous finishes.