Wisconsin held on to playoff dreams, but Nebraska should've, too

Wisconsin was like the pitcher that was asked to shut down the 1927 Yankees.

Each batter that stepped to the plate was capable of taking any pitch deep and humiliating the Badgers. Wisconsin’s schedule was Murderers Row. To the Badgers’ credit, they handled it far better than anyone expected them to entering Saturday night. That’s why with two losses, Wisconsin was still in the playoff hunt.

But if Wisconsin limited the damage against the 1927 Yankees in the first eight weeks, Nebraska pitched to the Lincoln North Star junior varsity team.

Through no fault of their own, Nebraska and Wisconsin had different paths to wind up on the same field on Saturday night. Both had hopes of keeping College Football Playoff dreams alive. The loser, many believed, would be all but finished in that argument.

Nebraska was finally pushed to its brink. And after 60 minutes and overtime, the undefeated start came to an end at the hands of Wisconsin.

But if you think the Huskers’ playoff chances died in Madison, then you weren’t paying attention very closely. 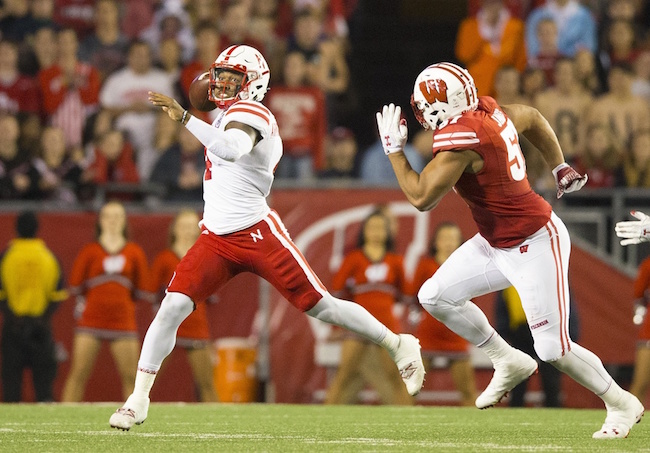 The question surrounding Nebraska was an obvious one. Would the Huskers lay down against their first quality opponent? After all, they were going back to the place where Melvin Gordon ran for 469,833 yards.

Saturday night wasn’t anywhere near that. Every punch that Wisconsin threw, Nebraska answered with a jab.

The Huskers hadn’t been down 10 points to a defense of Wisconsin’s caliber. A 10-point deficit on the road usually would’ve put Nebraska in a world of trouble. Tommy Armstrong would’ve telegraphed passes, thrown off his back foot and the Huskers would’ve lost by four touchdowns.

So why didn’t that happen?

Well, despite their friendly schedule, the Huskers learned a thing or two about rallying in the fourth quarter. As it turned out, it wasn’t Armstrong who threw key picks down the stretch. It was Wisconsin.

Nebraska doesn’t force overtime without those two Nathan Gerry interceptions. Maybe the Badgers win that game by three touchdowns and the world can go back to thinking Nebraska isn’t for real.

But that second half showed that the Huskers are nobody’s “fake ID.” Nebraska is of age, and more than welcome to join the party.

For all we heard about Wisconsin’s defense, the Blackshirts showed a lot of people that they can put the clamps on, too. Wisconsin was the team held without a point in the final 23 minutes of regulation. At Camp Randall, the Husker defense showed it was every bit as stingy as Wisconsin.

Despite the overtime battle, some will stick to the narrative because that’s what’s comfortable. They’ll point out the fact that Nebraska doesn’t have a win against a Power Five team with a record above .500. That’s factually correct.

Also true was the fact that Nebraska nearly pulled out a win in one of the toughest places to play in college football. For the first time all year, Nebraska played like a top-10 team. That was in question after lackluster efforts against B1G cellar dwellers, as it should’ve been.

We didn’t know if Nebraska had that extra gear. Frankly, the Huskers didn’t really need it until Saturday night. But at the very least, now we know they have it. That’s key ahead of the first College Football Playoff poll on Tuesday night.

Nebraska, for the time being, is a one-loss team that still deserves a shot at the final four. Next’ week’s showdown at Ohio State will be an elimination game for two one-loss teams. It’s worth mentioning that Northwestern had the Buckeyes fighting until the end in Columbus on Saturday, so anyone assuming a loss is getting ahead of themselves.

It’s crazy to think how close Nebraska was to pulling out a win and really stirring the pot. The Huskers were one play away from potentially knocking off Wisconsin, getting a lift in the B1G West race and making a case for a top-five spot come Tuesday.

But that didn’t happen. Instead, Wisconsin strengthened its playoff bid with its third win vs. a top-10 team. Nebraska will fall, though not nearly as far as some might’ve expected. Two playoff contenders slugged it out and further abandoned the preseason narratives surrounding them.

Wisconsin found a way to get yet another talented hitter out. Even though Nebraska came up short, it certainly showed it could catch up to the fastball.