Life in Lincoln gets much easier for Mike Riley with win vs. familiar foe Oregon

Lincoln can be a quite the pleasant place. It’s a capital city, but it has the feel of a small town. There’s an underrated downtown that’s walking distance from campus. A nice early evening stroll through the Haymarket is always recommended. Encounter a stranger and you’ll likely experience “Nebraska Nice.” Contrary to what former Colorado coach Bill McCartney said, you can do far worse than four years in Lincoln.

Mike Riley has inevitably learned those things already. It’s different from Corvallis, Ore., where Riley used to ride his bike through residential neighborhoods to get to work. In his short time at Nebraska, he found out how electric Lincoln can be after a monumental victory, and how deflating it can be after a home loss.

“Nebraska Nice” goes out the window after an 11 a.m. loss to Northwestern. Hopefully for Riley’s sake, he hasn’t turned on “Big Red Reaction,” which airs on seemingly every radio station in Nebraska following Husker games.

If Riley can’t pull out a victory against his old intrastate rival, his life in Lincoln gets more difficult. He would enter conference play without the momentum that he needs. We’re not talking about week-to-week momentum on the field. Frankly, that’s not a real thing. Saturday is Riley’s chance to bring some much-needed optimism to Lincoln.

Public perception in Lincoln matters. Without it, Bo Pelini wouldn’t have been on edge all the time. At the root of Pelini’s sour relationship with Shawn Eichorst and Harvey Perlman was the growing pressure felt after each headliner loss. Nine wins didn’t matter when Pelini was embarrassed by Ohio State and Wisconsin on national television.

Saturday is a huge national stage for Riley on ABC. Technically, it won’t be the primetime slot, but there are still plenty of people anxious to see if Nebraska can turn the corner after a historically bad season. 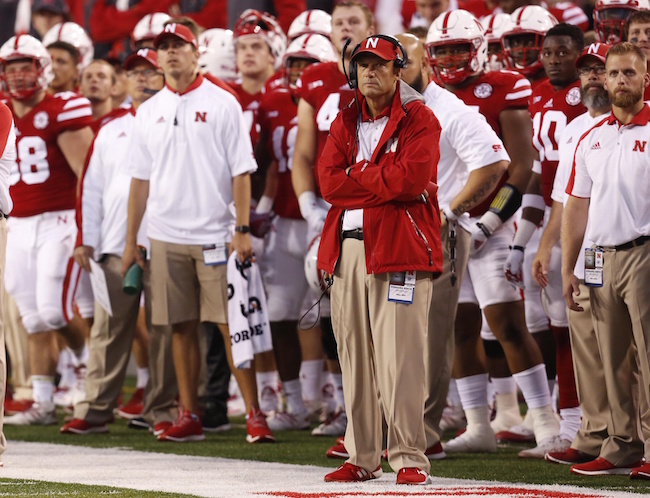 We already know that this game means plenty in the recruiting world. Riley’s loaded crop of West Coast recruiting targets will be on hand Saturday. Many of those same recruits are also considering Oregon. The final result doesn’t make or break a recruit’s decision, but Nebraska certainly can’t afford to let the Ducks come into Memorial Stadium and hang 50.

Oregon’s high-flying offense was the main reason that Riley struggled to sustain success at Oregon State. They were the program that prevented the Beavers from competing for conference titles and gaining the momentum needed to win consistently in a place like Corvallis. Not coincidentally, Oregon’s rise coincided with Oregon State’s fall from national relevancy.

Riley said that shortly after he took the job in Lincoln, someone told him that he’d get to take on Oregon in 2016. Did he know at the time that once again, beating Oregon would be the key to him gaining support? Maybe, or maybe not.

Nebraska fans just hope that a new team will yield different results for Riley. He did lose his final seven games and surrender an average of 45.6 points against the Ducks from 2008-14. 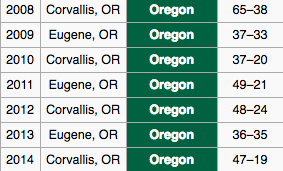 Those aren’t good omens for Saturday.

What is a good omen is the fact that Riley will take on Oregon with a new team, one stocked with more talent than what he had in Corvallis. He’ll also have a stadium packed with 90,000 diehards in his corner. It’ll be unlike any time the Ducks invaded Corvallis and made themselves at home.

Riley is still settling into his new home. He lived in an Embassy Suites for the first nine months on the job, going back and forth to Corvallis to be with his wife, daughter and grandson. The Riley family didn’t move into their new Lincoln home until after the Huskers began 2015 with a 1-2 record, which was their worst start in 34 years. By the time Riley finally moved in, he already had Nebraska fans calling for his job.

It’s been a full year since Riley’s rocky start. In his defense, he had his fair share of accomplishments in that stretch. He knocked off unbeaten Michigan State. Riley led the Huskers past his former Pac-12 foe UCLA for an all-important bowl victory. He also made major headway out West with some promising recruits.

But there have been just as many lows.

Riley dropped B1G West games to the likes of Illinois, Northwestern, Iowa and…Purdue. He was roasted for that. His most well-known assistant — in the recruiting world — got his third DUI and Riley delivered what many felt was a light punishment. Nebraska also had multiple players transfer and get suspended right before the start of the 2016 season.

The jury is still out on whether or not Riley is the right fit in Lincoln. Turn on “Big Red Reaction” and you’ll certainly hear more Bill Callahan comparisons than Tom Osborne comparisons.

Saturday is an opportunity for Riley to build some support for himself and build some optimism for his program. The Oregon game has far greater implications than pulling off a random upset of MSU in the midst of a five-win regular season. Beating Oregon would likely put Nebraska into the top 25 or very close to it. The Huskers haven’t entered conference play undefeated with a win vs. a top-25 team to boot since 2001. With a favorable start to the B1G slate, there’s major potential for Riley to get off to 7-0 start.

Riley can finally settle in if he gets past his all-too-familiar roadblock. Then, just maybe, Riley will experience “Nebraska Nice.”