Where team was when he was hired — It’s crazy to think that it was already 10 years ago that Fitzgerald took the job after the stunning death of Randy Walker. Understandably, it was a delicate situation to walk into. Some believed that Walker was on his way to becoming the best coach in school history. He was the first to lead Northwestern to three bowl games, which was why he received a contract extension through 2011 just a couple months before his death.

Fitzgerald took over in the middle of the summer, and fortunately, he was up for the task. He made that transition a little easier having already been a Northwestern assistant, but it’s never easy to take over after a death. Getting players to stay on board and focus on the job at hand was challenging.

Fortunately, Fitzgerald was already the recruiting coordinator which meant that a lot of Northwestern’s players were there because of him. As a result, Fitzgerald didn’t have to deal with a mass exodus. Instead, the Wildcats bought into their new 31-year-old coach. 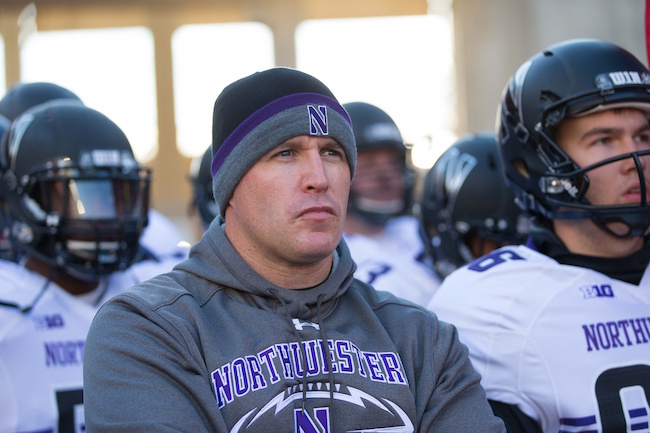 I won’t argue with you if you want to put the overtime victory at Notre Dame in this spot. Given the regional significance of that, knocking off the Irish was undeniably a mammoth win for Fitzgerald.

But the Iowa victory gets the nod because of what was at stake for the home team. Iowa, as you’ll recall, was three wins away from a possible national title bid. The undefeated Hawks were the cinderella story of the 2009 season. Perhaps they got caught looking ahead to their big showdown in Columbus a week later.

When Ricky Stanzi went down, so did the Iowa offense. Northwestern scored 17 unanswered points and stunned No. 4 Iowa in Iowa City. That was the first and only win over a top-five team in Fitzgerald’s 10 seasons at Northwestern. Iowa fans are still bitter about that loss.

Northwestern, however, will always be the team that ended the dream. After a 5-4 start, that win propelled the Wildcats to three straight wins, including a victory against No. 16 Wisconsin. That got Northwestern into the Outback Bowl, which was one of the best postseason honors in school history.

Needless to say, Fitzgerald was a made man after 2009.

The first home game Fitzgerald ever coached was the one he’d probably most want to forget. A home opener against a Division I-AA team is supposed to be a laugher. It was, but for all the wrong reasons.

The Wildcats fell 34-17 to New Hampshire after being shut out the entire second half. It wasn’t the most talented team Fitzgerald had, but it was certainly talented enough to beat a Division I-AA team that won nine games that season.

Many attributed the loss to the emotion of the first home game since Walker’s death. Mentally, some questioned if the Wildcats were in the right place. Fitzgerald said afterward that the moving pre-game ceremony got him fired up. That obviously wasn’t the case for everyone that day.

As a result, Fitzgerald’s home debut was not what he’d hoped for.

It hasn’t been easy to recruit at Northwestern. Lagging facilities and high academic standards made it a tough place to sell for the average top-flight recruit.

But whatever Fitzgerald did to land his 2014 class worked. He landed a Northwestern record four, four-star recruits, three of which were from Illinois. Fitzgerald doesn’t like getting caught up in recruiting rankings, but each of those players were significant in their own way. 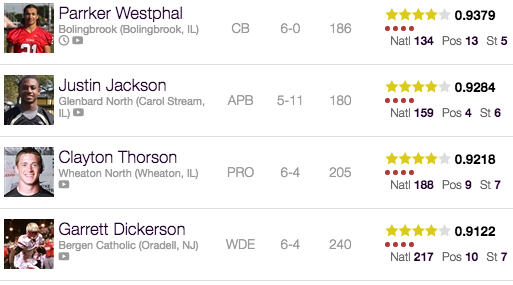 Parrker Westphal turned down Michigan, Notre Dame and Ohio State to come to Northwestern. Garrett Dickerson picked the Wildcats over Alabama, Michigan, Ohio State and Stanford. Both of those guys are expected to have major roles in 2016 after waiting their first two years in Evanston.

Fitzgerald’s other four-star signees became starters as freshmen. Justin Jackson is on pace to become Northwestern’s all-time leading rusher after back-to-back 1,000-yard seasons to start his career. Clayton Thorson, the Wildcats’ first four-star quarterback ever in the recruiting era, had mixed results in 2015. He led Northwestern to 10 wins, but that was with a run-heavy offense and one of the country’s top defenses. Still, he’ll likely be a four-year starter.

Fitzgerald also landed the dynamic Solomon Vault and emerging defensive lineman Xavier Washington, both of whom could become All-B1G players. That’s not a bad haul for one class. The 2014 group is the main reason that the Wildcats could be competing for B1G West titles the next couple years. 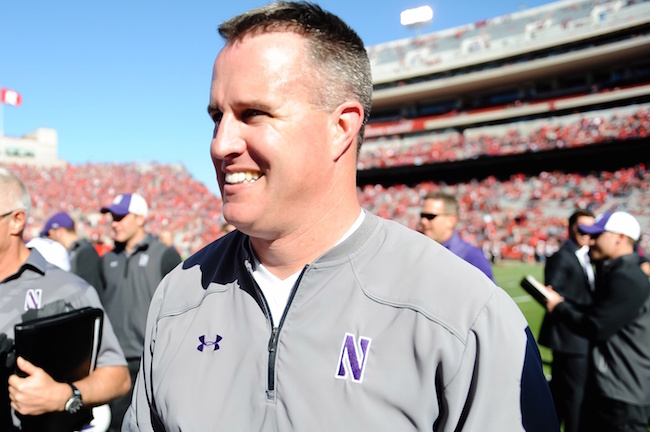 What could get him fired — A damning national scandal might be the only thing. Maybe four straight bowl-less seasons would do the trick before Fitzgerald’s contract runs out. Keep in mind that Fitzgerald signed a new 10-year deal in 2011 that basically doubled his pay and paid him an unprecedented salary compared to past Northwestern coaches.

Four straight bowl-less seasons would mean that he’d have one year left on his deal. Northwestern would have to make a decision on his future even sooner than that.

A more likely scenario will be Fitzgerald signing a new extension in the next two years after another eight or nine-win season that would keep him in Evanston into his 50s.

He’s already Northwestern’s all-time wins leader, a number which figures to become virtually untouchable by the time he’s done in Evanston. He earned the first bowl victory at Northwestern in 64 years in the Gator Bowl in 2013. The program had one season with double-digit wins before Fitzgerald got there (Actually, Fitzgerald was the All-American linebacker on that Rose Bowl team in 1995). The Wildcats have two seasons of double-digit victories in the last four seasons alone.

So yeah, Fitzgerald already the best coach in program history.

But it’s easy to forget that he’s the second-longest tenured coach in the B1G and he’s only 40 years young. He hasn’t quite reached the postseason success of fellow B1G staples Mark Dantonio and Kirk Ferentz, which is why he’s slotted behind them.

Like those two, Fitzgerald looks like he’s in for the long haul. The 2015 group — Fitzgerald’s 10th year on the job — was basically a replica of the 1995 Rose Bowl team. If that’s the new defensive standard at Northwestern, the Wildcats are on their way to developing some Wisconsin-like consistency in the B1G. They have Fitzgerald to thank for that.

Connor O'Gara
Connor O'Gara is the senior national columnist for Saturday Tradition. He's a member of the Football Writers Association of America. After spending his entire life living in B1G country, he moved to the South in 2015.
RECENT ARTICLES
NORTHWESTERN
Ex-Northwestern F Miller Kopp includes B1G program among three finalists
NORTHWESTERN
Report: 2 Pac-12 athletic directors interview for Northwestern vacancy
NORTHWESTERN
NFL draft analyst names sleeper from B1G who could be 'The best cornerback in this class'
NORTHWESTERN
Quarterback Ryan Hilinski explains why he transferred to Northwestern